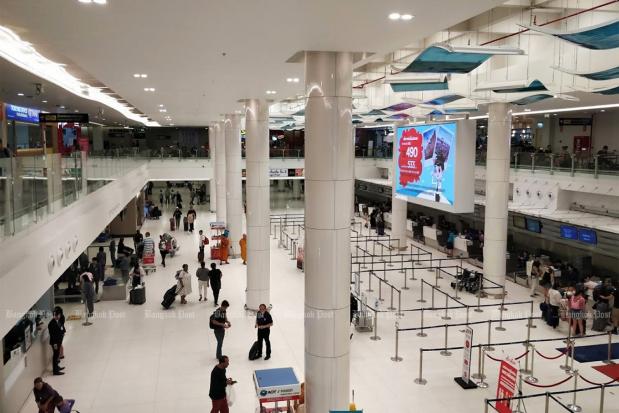 A view of Phuket airport. Most local residents and businesses agree that foreign visitors to the island should have to stay in 14-day quarantine.

The government is confident that a new reopening plan for Phuket will please locals, while a local hotel association wants safe entry for foreign travellers.

The draft reopening plan for foreigners, a pilot project for Phuket, drew backlash from the local community and made Prime Minister Prayut Chan-o-cha to ask for a revision last week.

Mr Anutin, who is also public health minister, told locals that the ministry has solid preparations -- including hospitals, medicines, equipment and personnel -- to look after incoming guests, particularly if there are no infections, unlike in the early stages of the pandemic before lessons were learned.

The tourism and sports minister Phiphat Ratchakitprakarn said that officials from his ministry visited the province in the past weekend and talked with local residents and businesses. Most agree with the rule that tourists have to stay in 14-day quarantine -- the same as Thai returnees.

After quarantine, visitors have to stay in Phuket for at least seven days before continuing their trips elsewhere in the country.

Mr Phiphat acknowledged some misunderstandings about unclear safety measures in recent weeks, which led to criticism of the reopening plan.


He said people in Phuket would like to focus on foreigners who have family or work in the province as the first group of arrivals.


"We will try our best to bring international tourists to the country before the end of the year," Mr Phiphat said.

Click "play" to listen to Phuket tourism plan draws criticism and "Download" to keep this file for educational purpose.

backlash : a strong negative and often angry reaction to something that has happened - การสะท้อนกลับอย่างรุนแรง

draft : not in a final form and likely to be changed - ร่าง

misunderstanding : a situation in which a comment, an instruction, etc. is not understood correctly - ความเข้าใจผิด

preparations (noun): things that you do to get ready for something or make something ready - การตระเตรียม

revision : a change, improvement or addition that someone makes to something like a plan or document - การปรับปรุงใหม่, การแก้ไขใหม่