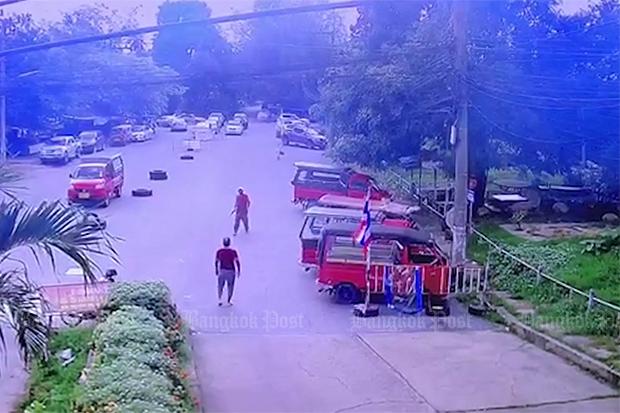 Footage from a surveillance camera shows the back of Sao Puangthong as he and rival tuk-tuk driver Chaowalit Phuthaksin confront each other during their quarrel outside Hat Yai railway station on Sunday afternooon. (Photo supplied)

SONGKHLA: A tuk-tuk driver was fighting for his life in hospital on Monday after being shot nine times.

He was shot by a rival driver at Hat Yai railway station on Sunday.

Police said Sao Puangthong, 40, was shot by Chaowalit Phuthaksin, 40. They were members of the same tuk-tuk queue, operating from Hat Yai railway station.

Colleagues and relatives said the two men had been competing for and fighting over passengers.

Witnesses told police a train had arrived at the station about 3pm. The two men had again quarrelled.

Mr Sao was looking for a passenger and Mr Chaowalit came at him from behind and fired six shots from a revolver. Mr Sao dropped to the ground.

Mr Chaowalit allegedly reloaded his gun and fired another three shots at Mr Sao, who was already lying on the ground.

Mr Sao was hit by a total of nine bullets and was rushed to Hat Yai Hospital, where he was in a critical condition.

A police officer who happened to be at the scene immediately detained Mr Chaowalit.

Mr Chaowalit was being held for legal action.

Click "play" to listen to Tuk-tuk driver shot 9 times and "Download" to keep this file for educational purpose.

compete : to try to be more successful or better than somebody else who is trying to do the same as you - แข่งขัน

detain : to keep someone in a police station or prison and not allow them to leave - กักตัว ควบคุมตัวหรือฝากขัง

queue : a line of people waiting for something - คิว

reload (verb): to put more bullets into a gun, more film into a camera, etc. - ใส่เพิ่ม

revolver : a type of small gun held in one hand that can be fired several times without putting more bullets in it - ปืนพกลูกโม่