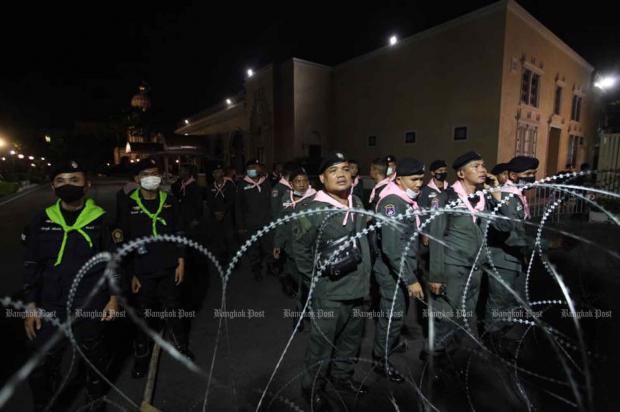 Police said 20 demonstrators, including three rally leaders, were arrested in Bangkok early on Thursday as the protest outside Government House was dispersed.

Two thousand police were also on standby to prevent another anti-government protest planned for Ratchaprasong intersection late on Thursday afternoon.

The deputy Bangkok police chief said at 7.30am that six companies of police ended the demonstration at Government House early on Thursday morning,

He said 20 demonstrators were arrested.

They included rally leaders Arnon Numpha, Parit Chiwarak and Prasit Krutharote. They were detained at the Border Patrol Police Region 1 offices in Pathum Thani for violating the state of emergency order and organising the demonstration.

Video posted on social media showed student leader Panusaya "Rung" Sithijirawattanakul being taken away in a wheelchair as she gave the three-fingered salute of pro-democracy campaigners.

She had said a protest would take place at 4pm despite the decree.

There were no injuries during the operation, police said.

Police also said 13 companies of police, about 2,000 in total, would be assigned to the area of Ratchaprasong intersection, on Rama I and Ratchadamri roads, from noon.

The public were advised to avoid the area from 4pm to 10pm.

Prime Minister Prayut Chan-o-cha's announcement of the state of emergency early on Thursday morning prohibited any public gathering of five people or more.

Police then ordered demonstrators at Government House to stop violating the order.

Some demonstrators were defiant, and police arrested them.

Police were also taking action against the people who posted illegal messages via social media.

company : a group of soldiers or police that is usually divided into two or more smaller groups - กองร้อย

defiant : refusing to obey a person or rule; refusing to accept that something is true - แสดงการท้าทาย, ไม่ยอมทำตาม, ไม่เชื่อฟัง

demonstration : an occasion when a group of people gather together to support or protest about something - การชุมนุม

standby : something which is ready for use if needed - สำรอง

wheelchair : a special chair with wheels, used by people who cannot walk because of illness, an accident, etc - เก้าอี้รถเข็นสำหรับคนป่วยหรือคนพิการ