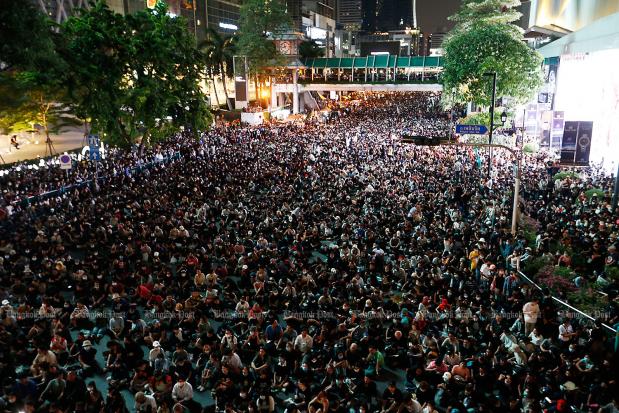 Protesters fill the road at the Ratchaprasong intersection, where they converged in defiance of the state of emergency put into effect early Thursday. (Photo by Arnun Chonmahatrakool)

Arrest warrants were issued on Thursday for two activists suspected of intending to harm Her Majesty the Queen's liberty during a rally on Wednesday.

If found guilty, the pair could be jailed for 16 years to life.


The warrants identified the two as Ekkachai Hongkangwan and Bunkueanun Paothon, political activists present at the rally.

The court granted the warrants following a request by Dusit police over an incident about 5.30pm on Wednesday on Phitsanulok Road.

On that day, the royal motorcade of Her Majesty the Queen passed along the road, which was cordoned off by security officers to stop protesters.

However, many protesters got through, and many were seen flashing the three-finger salute as her motorcade passed.

Her Majesty, representing His Majesty the King, was accompanied by His Royal Highness Prince Dipangkorn Rasmijoti.

She was to offer robes to monks as part of a ceremony at two temples.

Meanwhile, protest leaders Arnon Nampa and Prasit Khrutharoj were arrested in Bangkok and sent to Chiang Mai, where the provincial court issued arrest warrants for them.


Before he was arrested, Mr Arnon accused the police of using questionable tactics by leading the Queen's motorcade into the protest area. He said police wanted to show protesters as users of violence.

Although the allegations were unclear, three senior police were abruptly transferred.

Click "play" to listen to Cops seek motorcade pair and "Download" to keep this file for educational purpose.

cordoned off : stopped from entering an area by putting something such as a rope around it - กั้นด้วยเชือกหรือเครื่องกั้น

liberty : the freedom to live as you wish or go where you want - อิสรภาพ, สิทธิขั้นพื้นฐาน

questionable : involving doubts about whether something has been done properly - ที่น่าสงสัย

salute (noun): a formal signal, usually by putting your hand to your head as a way of showing respect to someone - การคำนับ, การแสดงความเคารพ