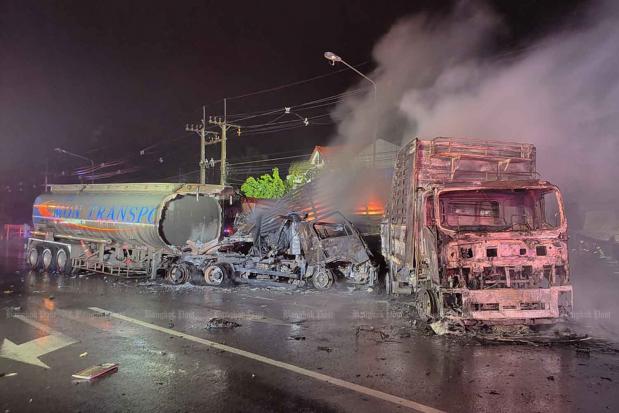 BURI RAM: A tanker carrying 40,000 litres of fuel crashed into an 18-wheel trailer truck and exploded, setting fire to nearby buildings and vehicles and injuring many people, about 12.30am on Thursday.

The burning fuel flowed into about 10 nearby shops and houses, and set fire to about 20 cars and motorcycles parked on the roadside.

Terrified residents ran for their lives as a series of explosions rocked the area.

As steady rain fell, the burning fuel spread about one kilometre along the road and through the drains. People tried to put it out with tap water, but only spread the flames further.

As the chaos spread, more than 50 fire engines were rushed the scene. Ambulances ferried many injured people to hospital.

The road was closed to traffic for a radius of five kilometres. Fire fighters took more than four hours to control the blaze.

The drivers of both trucks fled their vehicles before the first explosion. They were among the many injured people rushed to hospital. Police said the tanker truck driver confessed he dozed off before the crash.

Initial estimates put damage at many millions of baht.

Click "play" to listen to Horror as fuel tanker crashes, explodes and "Download" to keep this file for educational purpose.

chaos : a situation in which everything is confused and in a mess - การจราจล

doze off : to fall asleep for a short time - งีบหลับไป, หลับไปโดยไม่รู้ตัว

drain : a pipe that carries away dirty water or other liquid waste - ท่อระบายน้ำ

explosion (noun): the sudden violent bursting and loud noise of something such as a bomb exploding; the act of deliberately causing something to explode - การระเบิด

fuel : any material that produces heat or power, usually when it is burnt - เชื้อเพลิง

radius : a particular distance in all directions from a central point - รัศมี

tap water : water that is sent through pipes into building - น้ำประปา