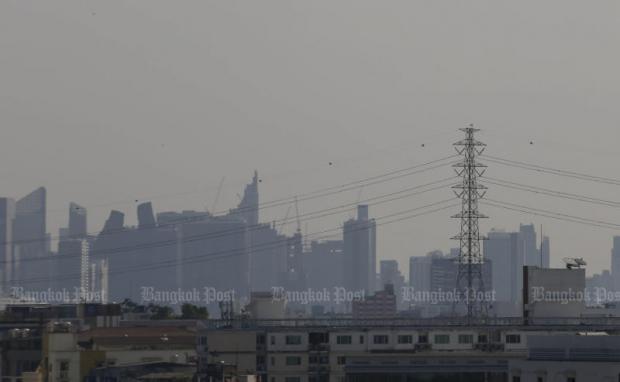 A hazy day on 10 November

PM2.5 pollution rose to moderate and high-risk levels in 21 areas of Bangkok and Samut Prakan province yesterday, according to the Pollution Control Department.

The department released readings at 1pm which showed that this hazardous air had passed the "safe" limit of 50 microgrammes per cubic metre (µg/m³) in 18 spots in Bangkok as well as three in Samut Prakan.

This is the result of the influence of cold air from China, according to the department.

The department director warned this sharp rise in pollutants could have an impact on public health, particularly in the areas of Bangkok and Samut Prakan with the highest readings.

He said the department is doing all it can to mitigate the problem.

The Health Department, he said, has opened an emergency centre to provide air quality warnings as well as provide health care assistance to vulnerable groups, such as children and the elderly, who are most likely to be affected.

Click "play" to listen to Bangkok PM2.5 levels hit danger zone and "Download" to keep this file for educational purpose.

mitigate : to make something less harmful or serious - บรรเทา