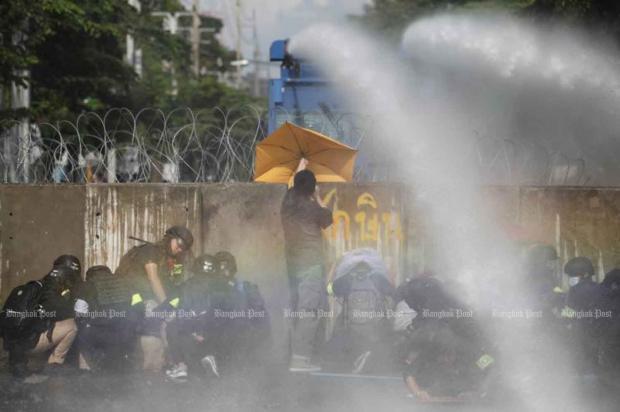 Demonstrators in protective gear take cover behind concrete barriers as riot police shoot water cannon to deter them from breaking through a barricade erected to block access to the parliament building, on Tuesday, in Dusit district of Bangkok. (Photo by Wichan Charoenkiatpakul)

Police on Tuesday used water cannon to fire tear gas solution at demonstrators trying to cut through razor wire erected outside parliament, and at least 18 people were hurt in the most violent confrontation since a youth-led protest movement emerged in July.

A group of demonstrators wearing helmets and other protective gear reached the line of concrete barriers and razor wire placed in front of the parliament in Dusit district at about 2.30pm. They then attempted to cross the barriers, throwing smoke bombs and bags of paint at riot police on the other side.

Police used water cannon to force them back.

The first three rounds consisted of plain water. When that failed to stop the demonstrators, police then used the water cannon to fire a liquid that included tear gas.

Ambulances took the injured to hospital. Bangkok's Erawan Medical Centre said 18 people were hurt, 12 of them suffering as a result of tear gas. It said one of those hurt was a police officer.

"This is brutal," said a 31-year-old volunteer with the FreeYouth protest group.

Some protesters scuffled with dozens of yellow-shirted royalists after an earlier rally by hundreds of right-wing Thais calling on lawmakers not to make changes to the constitution.

Pro-democracy leaders earlier announced a plan to stay overnight at the parliament while waiting for MPs to accept a proposed constitution amendment draft by civil group Internet Law Reform Dialogue (iLaw). It was one of seven drafts submitted to the parliament, with others sponsored by government and opposition parties.

Lawmakers are expected to discuss the issue for two days before voting on whether to accept any of the proposed drafts for deliberation.

Click "play" to listen to Eighteen injured in protest clash and "Download" to keep this file for educational purpose.

barrier : a bar or gate that stops people, animals or vehicles from entering a place - สิ่งกีดขวางทางผ่าน

deliberation : considering or discussing something - การปรึกษาหารือ

draft : something, e.g., a written proposal for changes to the constitution, a law, etc. that may be changed before it is finished - ร่างกฎหมาย

inflatable (adj): able to be filled with air, especially to be able to float in the air or water - ซึ่งทำให้พองได้

razor-wire barriers : a gate or structure made of very sharp wire that stops people or vehicles from entering an area - รั้วลวดหนามที่นำมาใช้กั้นการจราจร ไม่ให้คนผ่านไปมาได้

round : a bullet or a shot that is fired from a weapon - นัด(กระสุน) ชุดยิง

scuffle : to get involved in a short and sudden fight, especially one involving a small number of people - ต่อสู้กันอุตลุด

shield : an object that police officers carry in order to protect themselves - เกราะ

solution (noun): a liquid in which something is dissolved - สารละลาย