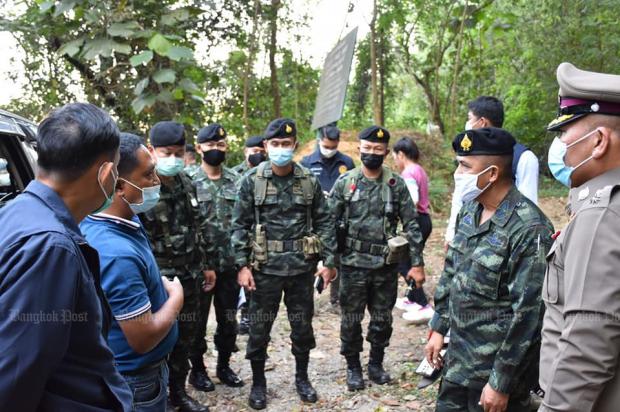 Security authorities patrol a border area in Mae Sai district of Chiang Rai on Sunday as they try to clamp down on Thais illegally returning to Thailand from Myanmar. (Photo from Pha Muang Task Force Facebook account)

Thailand has recorded two new coronavirus cases in Chiang Rai, both women who crossed the border illegally and worked with the woman feared to be a superspreader in Chiang Mai.

All three women worked at the same entertainment venue on the Myanmar side of the border.

Both worked at the same entertainment venue in Tachilek as the 29-year-old Covid-positive woman who sneaked across the border last Tuesday, caught a bus to Chiang Mai and visited a shopping mall and a bar while showing symptoms of the disease.

All three went to work in the Myanmar border town last month, but decided to return to Thailand after Myanmar authorities imposed a curfew from midnight to 4am in a bid to contain an outbreak of Covid-19.

Unlike the woman now being treated at a hospital in Chiang Mai, the new cases in Chiang Rai did not go to public places, instead staying in a local hotel and ordering food from delivery apps, Dr Thossathep said.

The 26-year-old woman decided to seek a virus test on Saturday after hearing that her colleague now in Chiang Mai had contracted the disease. Two tests confirmed she was Covid-positive on Sunday.

Public health officials on Sunday ordered her 23-year-old friend, who was also staying in Mae Sai, to get tested. She was also confirmed to have the virus.

The Chiang Rai public health office has identified four people as being at high risk of contracting the disease, and at least another 22 in a low-risk category.

Dr Thossathep said officials will try to test all of them on Monday.

The new cases have prompted security authorities to tighten security measures along the border with Myanmar as they expected more Thais working in Tachilek to return home.

"Many Thais working across the border are returning with the virus and those who are ill want to come back for treatment in Thailand," the Chiang Rai governor said.