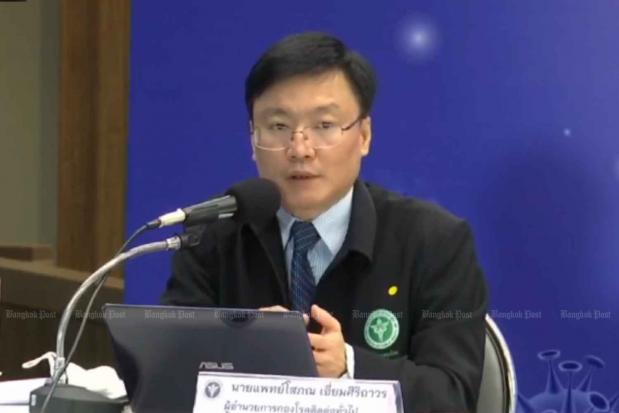 Six more Thai women who sneaked back from Myanmar's Tachilek town to Chiang Rai province late last month had Covid-19 and some of them travelled to Bangkok and other provinces.

Dr Sophon Iamsirithaworn from the Department of Disease Control said on Wednesday that one of the cases was a 28-year-old from Phayao province.

She worked at an entertainment place at 1G1 Hotel in Tachilek from Nov 1-26.

She returned to Chiang Rai's Mae Sai district last Friday. Then she met a friend and a boyfriend, went to Singha Park and left for Chiang Mai province on Monday when she tested positive for Covid-19. In Chiang Rai, she stayed at her friend's room and at Hop Inn.

They returned to Mae Sai on the following day, stayed at a hotel there and had a fever, sore throat and runny nose that morning. Then they rode on a Grab car to Chiang Rai airport and flew on Nok Air flight DD8717 to Bangkok's Don Mueang airport. The Bangkok returnee tested positive on Sunday.

The Phichit woman then took another flight from Don Mueang to Phitsanulok and travelled on to Phichit. She went to entertainment places, Bird Bar and Crocodile Rock Pub, in Phichit with friends. The woman tested positive on Tuesday. The entertainment venues were closed.

Another case is a 36-year-old from Ratchaburi province who stayed in Myanmar from Nov 3-28.

On Nov 23-24, she was at an entertainment place at 1G1 Hotel and met another Covid-19 case. Last Thursday, she started coughing and had a runny nose, sore throat and muscle pain.

She returned to Thailand last Sunday and went to Chiang Mai airport in a friend's car.

The woman took a flight to Don Mueang airport on the same day and went to the Mor Chit bus terminal to catch a bus to Ratchaburi. As a party-goer at 1G1 was confirmed with Covid-19, she was tested and the result showed on Wednesday she was infected.

Two other cases are two women, 23 and 25, who lived in Chiang Mai and were friends of a confirmed case who worked in Tachilek.

Dr Sophon said the six new cases added to four previously confirmed cases who had also sneaked into Thailand from Tachilek. One of the four was in Chiang Mai and the other three in Chiang Rai.

Click "play" to listen to More Covid cases from Tachilek, some in Bangkok and "Download" to keep this file for educational purpose.

coughing : the action of forcing air up through your throat with a sudden noise, especially when you have a cold - ไอ

entertainment : fun; behaviour or activities that are not serious but come from a sense of enjoyment - ความบันเทิง, ความสนุกสนาน

muscle (noun): a piece of body tissue that you contract and relax in order to move a particular part of the body; the tissue that forms the muscles of the body - กล้ามเนื้อ

sore throat : a pain at the back of your mouth - เจ็บคอ