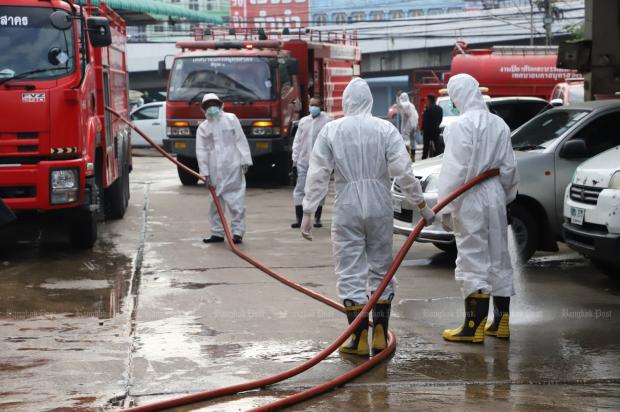 Workers spray disinfectant near the shrimp market in Samut Sakhon on Friday, as authorities step up efforts to contain the spread of coronavirus first detected in a shrimp vendor. (Photo from Samut Sakhon Public Relations Office Facebook page)

Samut Sakhon has been put under lockdown for 14 days following more than 500 Covid-19 cases.

The outbreak in Samut Sakhon, a province close to Bangkok, has been linked to the shrimp market where a 67-year-old Thai woman tested positive for Covid-19 earlier this week.

Dr Opas Karnkawinpong, director-general of the Department of Disease Control, said the 13 local infections intitally reported earlier in the day had surged to 548 following the testing of 1,192 people in the province. Most of them are migrant workers from Myanmar and 90% were asymptomatic.

“While there is a likelihood of finding more infections in crowded foreign communities around the shrimp market, they are low-risk groups because they are working age and healthy,” Dr Opas said on Saturday evening.

The Covid-19 alert level would be elevated until Jan 3, with the Talad Klang King or Central Shrimp Market off-limits so that disease control operations can be carried out.

Other locations in the province that will be closed temporarily include all kinds of entertainment venues, sports stadiums, boxing stadiums, schools and other educational institutions, tutorial schools, shopping malls, cinemas and spas.

Restaurants that sell alcohol are allowed to sell only takeaway, while convenience stores will be closed between 10pm and 5am, the order said.

There is also a ban on movements in and out of the province.

The spike in the seafood processing hub just east of Bangkok was the biggest one-day total by far since the pandemic began. As of Saturday morning, the country had reported a total of 4,331 cases, ranked 152nd in the world.

The seafood industry in Samut Sakhon employs thousands of migrant workers from Myanmar.

institutions : large and important organizations, such as universities or banks - สถาบัน

likelihood : the chance that something will happen - ความเป็นไปได้

off-limits : (of a place or area of land) not allowed to enter - ที่ห้ามเข้า,ที่ไม่อนุญาตให้ผ่านเข้าไป

stadium : a large closed area of land with rows of seats around the sides and often with no roof which is used for sports events and musical performances - สนามกีฬาที่มีอัฒจันทร์โดยรอบ

tutorial school : a place where students pay to get extra instruction, usually to prepare for examinations -