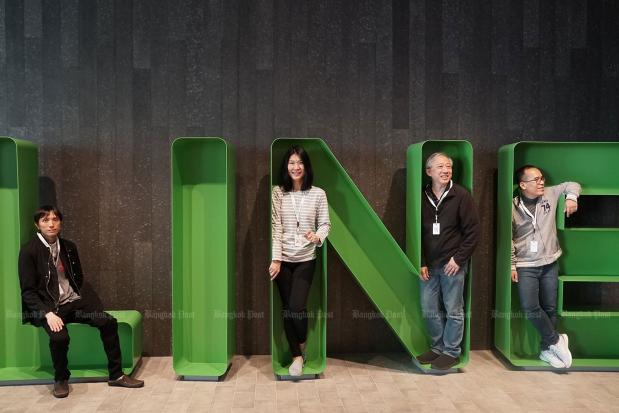 Meet the people who draw your favourite Line stickers

Read the following story by Pattarawadee Saengmanee from the Bangkok Post. Then, answer the questions that follow.

Cartoonist Nathawee Limpanilchart, 39, has shared her passion through the Maaja (Dogplease) page on Facebook and comic books for six years. Her page has almost 750,000 followers and has simple drawings that show the bond between dogs and their owners.

Recognising the potential of the Japanese-based Line chat app, Nathawee turned her cartoon characters into Line stickers, with the launch of Gigi the Bully back in 2014. A set features 40 bulldog stickers and catchy words that express different emotions and personalities.

"Initially, I was an author writing love stories and poems. I changed my career path to cartoonist after book sales declined. I have no skills in art or computer graphics but I like drawing. Six years ago, I set up the Maaja page on Facebook to share my work with friends, and it has become a community for pet lovers," Nathawee said.

"My cartoon characters come from all species of dogs and show animal nature. When I create words to go along with stickers, I'll imagine what my dogs want to say to me. Mostly they are easy to understand phrases that people use in daily life such as thank you, OK and miss you."

Under the name Dogplease, Nathawee won Line's Top Creators War contest this year with the newest set called Cat…please. This was her time making cat cartoon stickers, and they have been downloaded by more than 10,000 Line users in Thailand.

"Each set costs 30 baht and the proceeds of sales is split 50-50. I will launch a new sticker set every three or four months," Nathawee said.

The Line sticker market is booming, with around 2 million creators earning more than 19 billion baht last year. According to a sales report released in May, Thailand with its 44 million users is the third biggest market after Japan and Taiwan.

Application developer Natee Sorapipat, 42, aka N9 Design, was a rising star two years ago after he created more than 100 sets of creative name stickers. Featuring familiar words, his bunny characters act like your avatar and say things like miss you, thank you or good night.

"Two years ago, stickers with nicknames were popular, but I couldn’t find my name. I decided to create stickers for myself and expanded the collection to include other names. Each set has 40 characters with some words we use in daily life," said Natee. "I also create stickers under a festive theme during New Year and Songkran so that people can send best wishes to their friends and families."

Under the pen name PeakStudio, Nattadhol Kaewbaidhoon, 59, had no skills at drawing but showed his creativity in designing his first set of the Super Buta stickers for his wife three years ago. At that time, his smiley pink pig character in a red cloak earned less than ¥1,000 (less than 300 baht).

Inspired by a game from his childhood, Nattadhol continued to the second set of stickers to mourn the passing of King Bhumibol Adulyadej. Then, he launched the colourful Sweet Girl sticker set during the festive season, making it an instant hit.

"My children encouraged me to create Line stickers and taught me how to use the drawing program on a computer. I'm not good at drawing, so I've learned more techniques on YouTube. I feel happy when people like my work. The Line Creators Market is a stage for everyone to show creativity. It's good for me to earn money in my retirement," said Nattadhol. 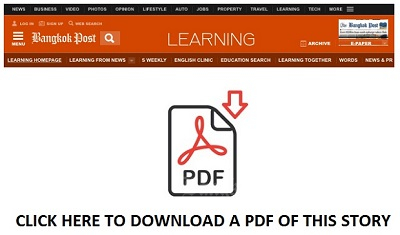 Section 1: Read through the story and choose the correct sticker creator.

21. the possibility of something being developed……………

24. a picture of a person or an animal which represents a person……………

Click "play" to listen to TEST YOURSELF: Sticker sensations and "Download" to keep this file for educational purpose.