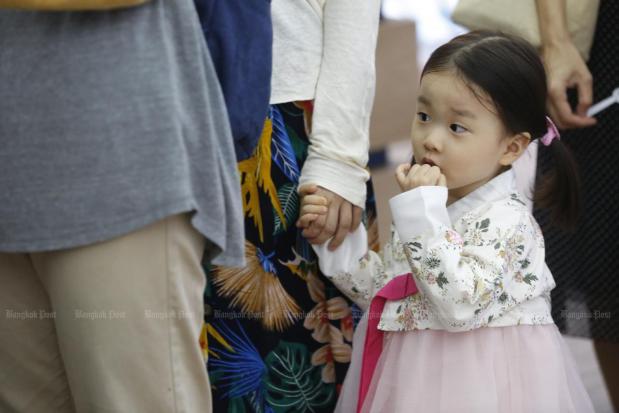 Korean culture is more popular than ever

Read the following story by Dumrongkiat Mala from the Bangkok Post. Then, answer the questions that follow.

Neon signs written in Hangul cover shopfronts. Loud K-pop music and the smell of barbecue grills seep into the air. For a moment, it would be easy to imagine this was Seoul rather than the heart of Bangkok.

Located on the corner of Soi 12 on Sukhumvit Road, Sukhumvit Plaza is informally known as Korea Town in Bangkok because it is filled with floors of Korean restaurants, nightclubs and businesses selling imported Korean products.

"This place is the centre of Bangkok's Korean community. Korean expatriates always come here because it's the best place for authentic Korean food and goods. It's a home away from home for us," said Yoon Dae-sook, a 64-year-old Korean entrepreneur who has been living in Thailand for over 20 years.

Ms Yoon, who now owns three Korean restaurants in Korea Town, said her restaurants are packed with customers due to the growing number of Korean expatriates in Thailand and the Korean culture craze known as the Korean Wave.

However, Ms Yoon said, her businesses have not always been so good.

"When I moved here and started running a restaurant 24 years ago, the situation was very different. Back then, there weren't many Koreans in Thailand and Korean food wasn't popular among Thais. But everything changed when the 2003 South Korean soap opera Dae Jang Geum [Jewel in the Palace] started airing in Thailand," she said.

Korean food and culture became incredibly popular in Thailand in the wake of the show's popularity, so she decided to open more restaurants to meet increasing demand.

"Due to these opportunities, more and more Koreans have moved here to do businesses. The small Korean community here has become bigger," she said.

Kim Jong-min, 53, chief editor of Bangkok Information Magazine, an online magazine for Korean expatriates in Thailand, said it's not just business opportunities that have drawn South Korean expatriates to Thailand, but also the weather, cost of living and Thai way of life.

"Most Korean expats in Thailand make a living by running their own businesses such as restaurants, tour companies, entertainment venues, property developments or by working for companies. However, there are also large groups of retirees and young people who want to escape from the stress of Korean society," he said.

Mr Kim said international schools in Thailand are also a popular choice for Korean parents due to their standards, more affordable fees and a reputation for being less stressful environments than schools in Korea.

"There is too much pressure on young people in Korea nowadays, so Thailand was an attractive option for them as life is more relaxed here. For retirees, Thailand is also a popular destination because it is more affordable than living in Korea and the infrastructure here is better than other countries in the region," he said.

Mr Kim said that after living here for 22 years he has also decided to spend his retirement in Thailand.

"Chiang Rai will be my retirement location. It's a peaceful place and still very natural. Thailand is like my second home and I want to spend the rest of my life here," he said.

South Korean ambassador to Thailand Lee Wook-heon said Thailand's image in the eyes of Koreans has always been positive due to the close friendship between the two nations.

6. Mr Kim says the Thai infrastructure is better than in Korea. True or false? …………….

In 2013, the Korean Cultural Centre in Bangkok …14… established to help exchange …15… ideas and create a stronger friendship between the Republic of Korea and the Kingdom of Thailand. Located …16… Sois 15 and 17 on Sukhumvit Road, the three-storey building …17… displays of Korean culture. …18… 2,000 people visit the centre each month for language and cooking classes as well as visit the various exhibitions that …19… there.

23. an interest in something that is shared by many people …………

24. people who have stopped working because of their age ……………

Click "play" to listen to TEST YOURSELF: Riding the Korean Wave and "Download" to keep this file for educational purpose.