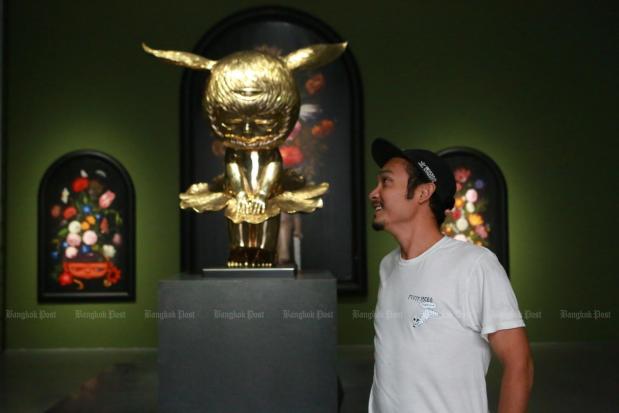 Alex Face, aka Patcharapol Tangruen, has always known that his works won’t last forever. While he may create an impressive mural today, it might be gone tomorrow as it’s either painted over or the wall is simply torn down.

A THOUSAND YEARS
During the lockdown, Alex and his 11-year-old daughter created their own paintings of flowers. His iconic character -- a moody-looking three-eyed childlike figure in a rabbit suit -- is also included in a painting, and that’s how he began creating his latest collection titled "Monument Of Hope".

"Since murals can be destroyed easily, my work is always impermanent which is why I focus more on using durable materials such as bronze which can last a thousand years. Creating sculptures is fun and challenging because unlike a painting, I have to look at designs from a three-dimensional view," he said.

The 39-year-old artist titled his exhibition "Monument Of Hope" to refer to hope for the new generation.

"Flowers symbolise hope and today the new generation has hope similar to a flower that is blossoming in their thoughts. They hope for a better future and their strength gives life to hope. In fact, we can't live without hope," said the artist.

ILLEGAL ART
Alex is interested in political and social issues but people must interpret the message in his work because he does not tackle issues directly like many street artists. Earlier this year, his previous collection "Playground's Border" depicted a three-eyed icon lying down surrounded with barbed wire.

"The collection was displayed at Vertical Gallery, Chicago, earlier this year. I discussed the issue with my American friends. Barbed wire symbolises an unwelcoming border but it isn't limited to only a country's border. It can also mean an invisible border," explained Alex.

Alex has been a street artist for more than a decade. He admits that his mural art is illegal if he doesn't ask for permission from the owner of the site where he paints. He also found out this year that police officers have become more strict about graffiti than in the past due to political conflict.

Last year, Alex travelled extensively. He spent a month in Europe and another in the US to exhibit his paintings and created mural art in many places. The artist feels happy when his artworks encourage people in a community to gather and participate in an activity together.

Before going to New York, he was also worried about discrimination because of what he had seen in movies. However, his attitude changed after he realised New Yorkers were friendly.

"Americans don't mind talking to strangers. I wore a t-shirt with the name of a Thai band Rap Against Dictatorship and New Yorkers really liked that. They always talked to me about it. I also like the energy of the city. Everything goes so fast. I felt like I had to go out and create mural art every day. We sometimes created more than a piece a day," said Alex.

Section 3: Read the following passage. Then, fill in the blanks with the correct words from the choices given.
“In Shenzhen, China, I was at a …14… café located next to a port and labourers' shacks. I saw …15… people visit the café to take photos for social media. Some of them took it so …16… that they even brought a change of clothes. However, later I saw a child who came from a shack run to the café and he was …17… . The café was like a …18… world to him. I felt as if there was an …19… line that divides people”

Section 4: Find words that match the following definitions.
20. an artwork painted on a wall ……………
21. important and recognisable, representing someone ……………
22. an important building or structure ……………
23. a desire for something to happen …………
24. writing or painting on walls without permission ……………

Click "play" to listen to TEST YOURSELF: Saving Face and "Download" to keep this file for educational purpose.