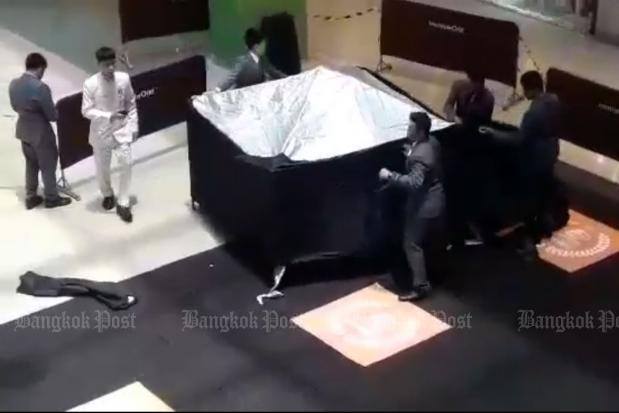 A video capture shows staff setting up a tent to cover the body of a man who fell to his death at the CentralWorld shopping centre in Pathumwan district, Bangkok on Tuesday.

A man, 55, fell to his death from the seventh to the third floor of CentralWorld shopping centre in Bangkok at about noon on Tuesday.

Police at the Pathumwan station were informed of the incident at about 12.30pm. A video clip showed the injured man lying on the floor and staff setting up a tent to cover him.

Media reported that the man arrived at the shopping centre with another man. Some reports said the two had an argument before the fall but other reports said they were taking photos close to the rail(ing)ingwhen one of them suddenly fell.

The man suffered multiple broken bones and was later pronounced dead at the nearby Police General Hospital.

Click "play" to listen to Man falls to his death at Bangkok's CentralWorld and "Download" to keep this file for educational purpose.

tent (n): a portable shelter made of cloth or fabric -