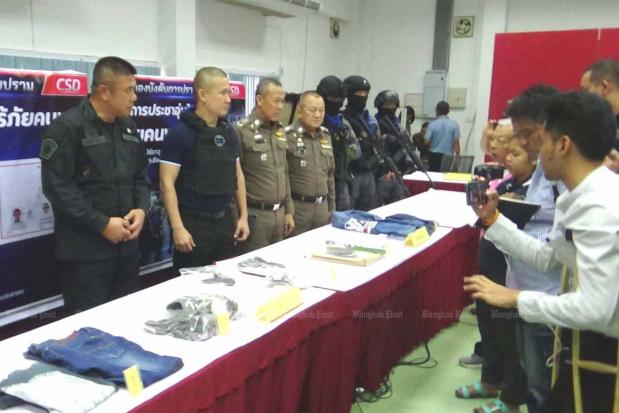 Senior police officers in Trang province on Sunday announce the arrest of seven suspects for the murder of a garage owner in the southern province last month. (Photo by Methee Muangkaew)

TRANG: Police have arrested seven people for the murder of a garage owner in Ratsada district last month.

Three of them confessed to the killing, Pol Lt Gen Ronasin Phusara, commissioner of the Provincial Police Region 9, said on Sunday.

The seven people are accused of the murder of Thawatchai Klabkhan, 53, in front of his business, Thawatchai Karnchang garage, in tambon Khlong Pang on Dec 18 last year.

Pol Lt Gen Ronasin said local resident Jirawut Sriwirat is accused of masterminding the crime, in the belief Thawatchai had an affair with his wife.

He was suspected of hiring a team of hitmen from Nakhon Si Thammarat province. Mr Jirawut sells auto parts and was a close friend of Thawatchai.

Also arrested were Ratsada resident Chatchai Wongyai, who allegedly pointed out the victim for the gunmen.

Arrested suspects from Nakhon Si Thammarat were Pran Wongpipan and sub-district chief Suchart Jittisak, who allegedly accepted the murder contract, suspected gunman Piyawat Jittisak and his suspected driver for the job, Thanadet Iadprab. Police did not identify another arrested suspect, or another gunman who remained at large.

At the murder scene last month, police found 19 bullet holes in Thawatchai's pickup truck and 23 spent shells on the ground near the vehicle. Police are still searching for the assault rifles used in the murder.

affair : a sexual relationship between two people, especially when one of them is married to someone else - ความสัมพันธ์เชิงชู้สาว

at large : not having been caught by the police - ลอยนวล, ยังไม่ถูกจับกุม

hitman : a person who is paid to kill someone - นักฆ่ามืออาชีพที่ใช้ปืนเป็นอาวุธ

mastermind : to plan a difficult or complicated operation, especially a crime - วางแผน

shell : a weapon consisting of a metal container filled with a substance that explodes, fired from a large gun - กระสุนปืนใหญ่