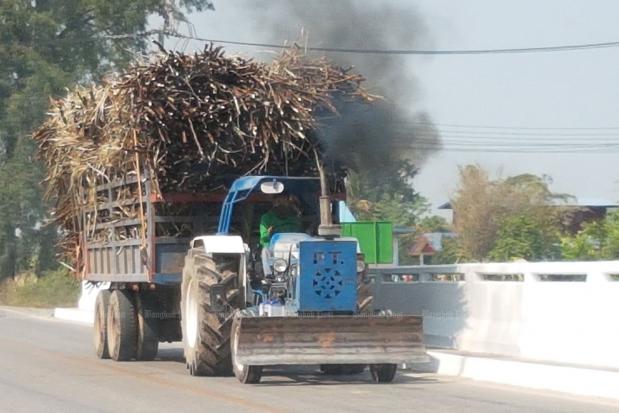 A tractor hauls harvested sugarcane on a road between Bang Krathum and Wang Thong districts in Phitsanulok on Sunday, with smoke from a burning field in the background. (Photo by Chinnawat Singha)

PHITSANULOK: Villagers in Wang Thong and Bang Krathum districts have complained that black soot and ash from burning sugarcane fields is raining down on their houses and everywhere else on a daily basis, making life miserable.

One resident of Ban Noen Sa-at in Bang Krathum district of this lower northern province said burning-off by farmers has been non-stop recently. It was now time for them to harvest their cane in a rush to supply it to millers.

The practice is illegal, but farmers argue that burning off the leaves makes it easier to harvest the valuable sugar-rich stems for delivery to factories.

The burning is usually done at night to avoid being caught by authorities, but sometimes during the day as well.

The fires send black soot and ash high into the air, which fall on residential areas nearby.

Residents complain they have to clean the muck out of their houses and off the roads every day, and sometimes several times a day. (continues below) 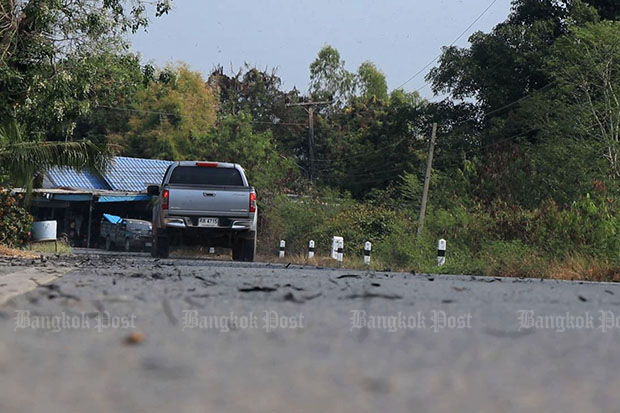 One shop owner said he has to clear away the ash with a hair drier.

Angry householders said owners of the sugar mills should be held responsible for the damage and health hazards caused by burning-off, and the mess resulting from the soot and ash.

Click "play" to listen to Residents troubled by black ash from burning sugarcane and "Download" to keep this file for educational purpose.

hazard : something that is dangerous and likely to cause damage - สิ่งที่เป็นอันตราย

soot : black powder that is produced when wood, coal, etc. is burnt - เขม่า

stem (noun): the long thin central part of a plant from which flowers and fruit grow - ลำต้น