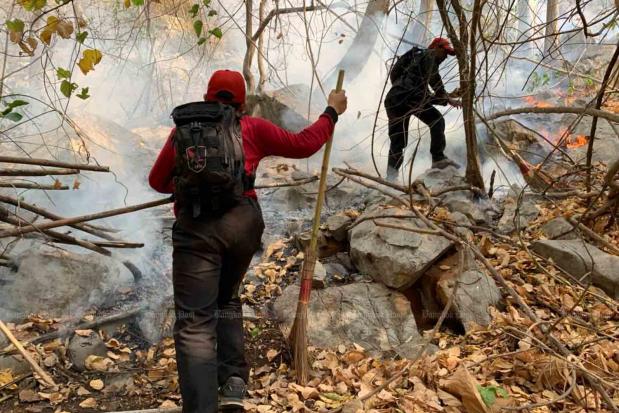 Firefighters combat one of several fires that have burned in forest in Khao Yai National Park since early in January. The fires were declared under control on Monday. (Photo by Prasit Tangprasert)

NAKHON RATCHASIMA: Forest fires which have been burning in parts of Khao Yai National Park since early this month are reported to have been finally put out.

The bushfires were first reported on Jan 5 by national park officials in Khao Siad-a, Khao Ang Hin and Khao Nok Yung forest reserves near Ban Nong Yang in tambon Phayayen of Pak Chong district. They were believed to have started about five days previously.

Crews from several stations in the national park were mobilised to combat the blazes.

The last flames were extinguished about noon on Monday, according to a local media report.

An investigation is underway into the cause of the fires.

Click "play" to listen to Khao Yai bushfires extinguished and "Download" to keep this file for educational purpose.

blaze : a large fire that cause a lot of damage -

combat (verb): to try to stop something unpleasant or harmful from happening or increasing - ต่อต้าน

mobilise : to organise a group of people to do something - ระดมกำลัง