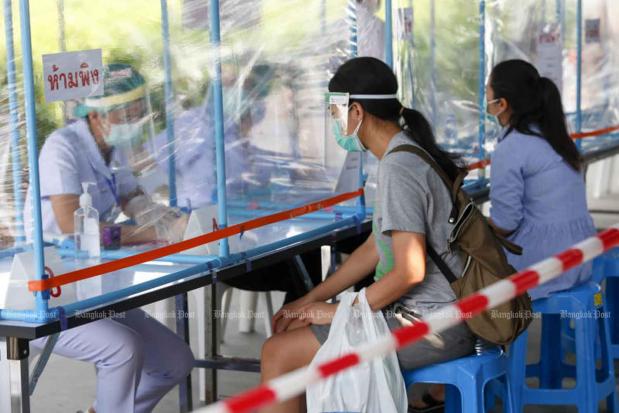 Patients and nurses are separated by a transparent partition at Pranangklao Hospital in Nonthaburi province on Thursday, when the government reported three more deaths from Covid-19, raising the toll to 15. (Photo: Pattarapong Chatpattarasill)

The government on Thursday reported 104 new local cases of coronavirus disease 2019 (Covid-19) infections, bringing the total to 1,875, with three new deaths raising the toll to 15.

A spokesman of the government's Centre for Covid-19 Situation Administration, said one of the three deaths was a Thai man, 57, who returned from Pakistan and died on a south-bound train from Bangkok to Sungai Kolok while in Prachuap Khiri Khan province on Monday.

The man went to Pakistan on Feb 22. He returned via Suvarnabhumi airport on March 29 and boarded the train at 3pm on Monday. He also suffered from diabetes and hypertension.

His death resulted in the quarantine of 15 railway officials who came in close contact with him.

Another new death was a Thai man, 77, who had suffered diabetes and emphysema. He was in contact with a previous Covid-19 patient.

The third was a Thai man, 55, who was a public transport driver at Suvarnabhumi airport.

Of the new 104 patients found in 21 provinces, 41 were in close contact with previous patients, 11 returned from other countries, 10 visited entertainment places, eight attended religious ceremonies in Indonesia, eight worked closely with foreigners, three were foreign visitors, two were in contact with travelers from other countries, two others were medical officials, one visited a crowded place, and another visited a boxing stadium.

Bangkok also had the highest number of new patients, with 30, followed by 11 in Phuket, nine in Samut Prakan, eight in Yala, four in Chiang Mai, and three each in Chiang Rai, Songkhla, Pathum Thani and Narathiwat.

emphysema : a condition in which the small bags in the lungs become filled with too much air, causing breathing difficulties and heart problems - อาการผิดปกติอย่างเรื้อรังของปอดโดยที่ถุงลมโป่งพองและขาดการยืดหยุ่น