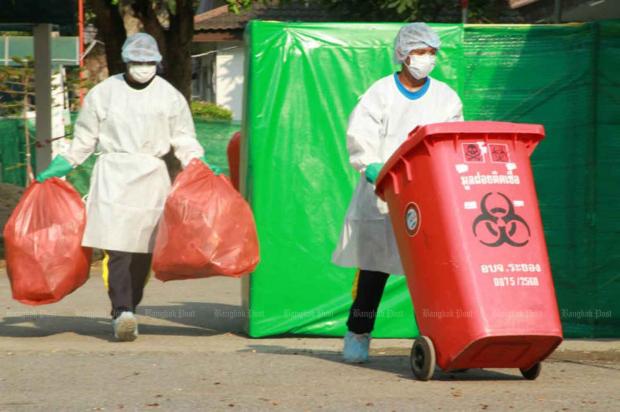 Navy officers are handling garbage at a quarantine facility in the Sattahip naval base in Chon Buri province on Wednesday. (Navy photo)

The government on Wednesday reported 111 new local cases of Covid-19, including 42 returnees from Indonesia, raising the total to 2,369. Three more deaths took the accumulated toll to 30.

Dr Taweesin said the new 111 local cases included 42 Thai returnees from Indonesia and 37 people who had been in close contact with previous patients, including 18 in Bangkok, seven in Nonthaburi and six in Yala.

"The 42 returnees from Indonesia were from one group of people and were tested on Tuesday," he said, referring to Muslims who returned on Monday from religious ceremonies in Indonesia.

Click "play" to listen to Wednesday: 111 new Covid cases, 3 deaths and "Download" to keep this file for educational purpose.

ceremony (noun): a public or religious occasion that includes a series of formal or traditional actions - งานพิธี

renal (adj): relating to or involving the kidneys, the two organs in the body that remove waste products from the blood and produce urine - เกี่ยวกับไต