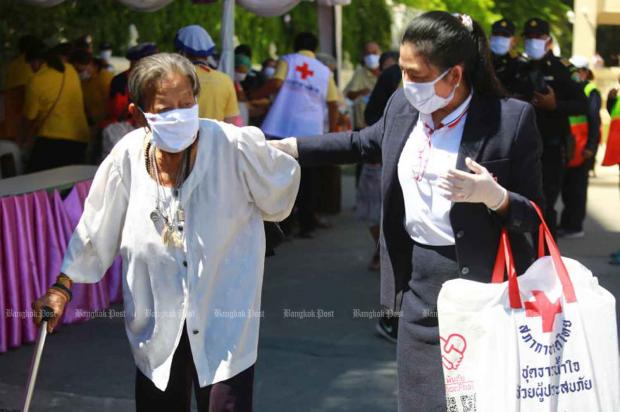 People in need because of the Covid-19 lockdown receive help from the Thai Red Cross Society at Wat Pathum Wanaram in Bangkok on Wednesday. (Photo: Somchai Poomlard)

Taweesilp Visanuyothin, spokesman for the Centre for Covid-19 Situation Administration, said on Wednesday morning the new cases included six male students, aged 23-33, who returned from Saudi Arabia through the Padang Besar border checkpoint in Sadao district of Songkhla on Sunday.

Three of them were quarantined in Songkhla and the other three in their home provinces of Yala, Pattani and Narathiwat. They tested positive for the virus on Monday. Four of them had a fever and cough. The others had no symptoms.

Their return through Padang Besar would require the temporary closure of the border checkpoint for sanitisation, Dr Taweesilp said.

Two other new patients are Thai men aged 18 and 27 who returned from the United States on May 12. They were quarantined in Chon Buri province. They had no symptoms but tested positive on Tuesday.

The other new patient is a Thai masseur, 34, who returned from Qatar last Friday and was quarantined in Samut Prakan province.

masseur (noun): a person whose job it is to give massages to people - หมอนวด