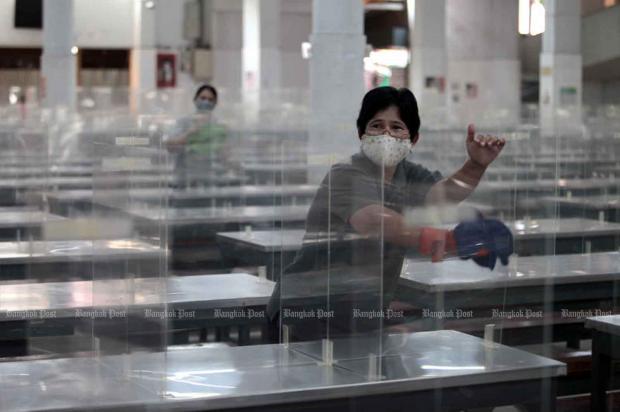 Staff at Samsenwittayalai School in Bangkok clean the canteen. The school was closed on Wednesday over Covid-19 concerns. (Photo: Chanat Katanyu)

The Centre for Covid-19 Situation Administration said the five new patients had returned from Singapore, the United Arab Emirates and the United States.

One of them was a woman aged 48 who arrived from the US on Saturday and was quarantined in Bangkok. On Monday she lost her sense of smell and had a sore throat and excessive phlegm. She tested positive on Monday.

Two others were male workers aged 43 and 49 who returned from Singapore on Monday. They were ill on  arrival and tested positive at a quarantine area of Suvarnabhumi airport. They were sent to a hospital in Samut Prakan province.

The two others were a man aged 27 and a woman aged 35, who arrived from the UAE on July 2 and were quarantined in Chon Buri province. They tested positive on Monday, 11 days after arrival, but remained asymptomatic.

Of the total 3,232 cases, 3,092 had recovered including one patient released on Tuesday. Eighty-two patients remained at hospitals. The death toll remained at 58.