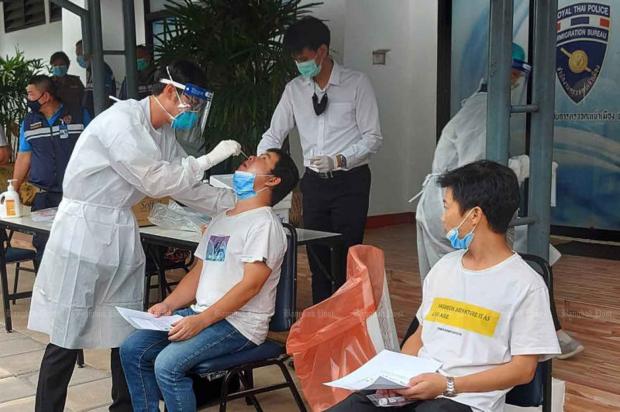 The government on Thursday reported 13 Covid-19 cases, 10 quarantined arrivals and three Myanmar truck drivers who have already been sent home, raising the total to 3,665.

The Centre for Covid-19 Situation Administration said there are three new cases from both Myanmar and South Sudan, and one each from Ethiopia, Italy, Lebanon and the Netherlands.

Two of the arrivals from Myanmar are men, chefs aged 41 and 52, and the other a hotel worker, 58. They flew in from Yangon on Oct 9 and their infections were confirmed on day 4 after their arrival.

The three cases from South Sudan are army engineers, aged 33, 46 and 53, who arrived on Monday. Their infection was confirmed right away.

The case from Lebanon is a male Syrian doctor, 33, who arrived on Oct 9 via Dubai. His infection was confirmed on day 3. He had a fever, cough and loss of smell. He was the only new patient with symptoms.

The case from the Netherlands is a Thai woman, aged 27, who arrived on Oct 10 and whose infection was found on day 3.

The case from Italy is a Thai woman, 31, who arrived via the Netherlands on Oct 10. Her infection was found on day 3.

The case from Ethiopia is a Thai man, aged 66, who arrived on Monday and was found with Covid-19 right away, the CCSA reported.

Three other cases also came from Myanmar and have already been repatriated to Myanmar's border town of Myawaddy. The three Myanmar lorry drivers were found with Covid-19 in the border province of Tak late last week.

repatriate : to send or bring someone back to their own country - ส่งคนกลับประเทศ