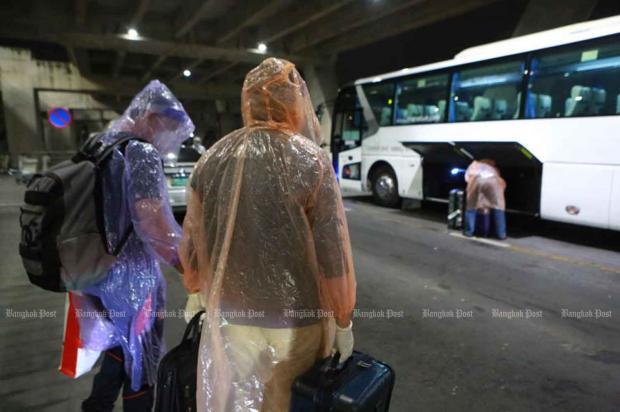 Arrivals board their bus to a quarantine facility at Suvarnabhumi airport during a recent rain storm. (Photo: Somchai Poomlard)

The government on Friday reported four new cases of novel coronavirus infection, women returning from the Czech Republic, Germany and Japan, raising the total to 3,892.

Two patients from Czech Republic returned last Saturday. One of them was a masseuse aged 44 and the other a 40-year-old labourer. They were asymptomatic.

The returnee from  from Germany was a 33-year-old cook, who also arrived last Saturday. She had a fever and loss of sense of smell and taste four weeks before her flight.


The case from Japan was a 24-year-old labourer who arrived at Suvarnabhumi airport on Wednesday with a fever, and tested positive right away.

senses (noun): the five powers (sight, hearing, smell, taste and touch) that your body uses to get information about the world around you - ประสาทสัมผัสและการรับความรู้สึก