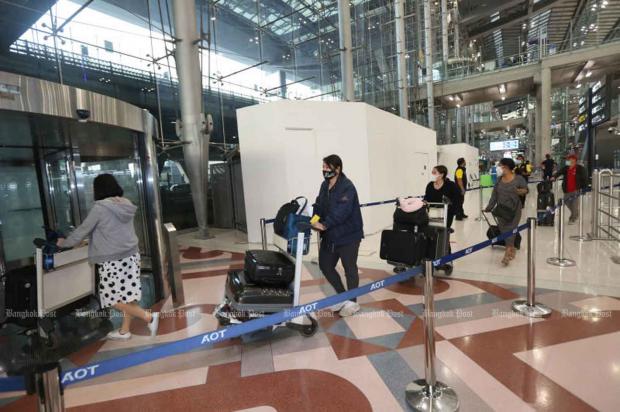 Arriving passengers leave the terminal at Suvarnabhumi airport. Quarantined arrivals made up half of the new Covid-19 cases announced on Thursday. (Photo: Varuth Hirunyatheb)

The government on Thursday reported 13 new cases of novel coronavirus disease, arrivals from six countries and illegal returnees from Myanmar, raising the total to 4,039.

Covid-19 infections were confirmed in six Thai women who sneaked back from Myanmar late last month, and in quarantined arrivals from India, Mexico, the Netherlands, Pakistan, Sweden and the United States.

Two new cases from the Netherlands are Thai women aged 42 and 49 who were quarantined in Bangkok and Chon Buri.

Another is a man from India, and another is from the US - a Thai waitress, 31, who is in quarantine in Bangkok.

The patient from Mexico is a Thai seamstress, 46.

The case from Sweden is an Egyptian doctor, 32, who is in quarantine in Bangkok.

And the other is a Pakistani man, 37.

recover : to become healthy and fit again after an illness or injury - การฟื้นไข้

seamstress : a woman who sews, who repairs clothes or makes new clothes with a sewing machine or needle and thread -