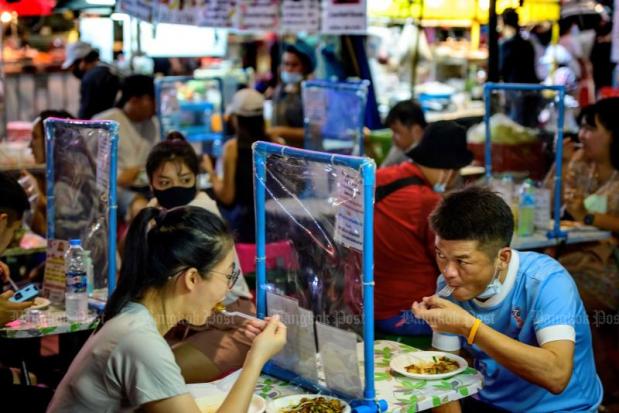 People dine separated by dividing screens at a street food corner in Bangkok's Chinatown on Sunday after authorities imposed restrictions on restaurants due to the recent Covid-19 coronavirus outbreak. (AFP photo)

Thailand added 249 new coronavirus cases, 224 of them local transmissions, bringing the total number of confirmed cases to date to 10,547.

No new deaths were reported.


Eleven of the 249 new cases were people who recently flew into the country and were in state quarantine -- six Thais and five foreigners. Two of the Thais flew in from Switzerland, and one each from the United Kingdom, Turkey, Bahrain and Denmark. The five foreigners arrived from the UK, the US, the UAE, Holland and Somalia.

A further 14 cases were Thais who returned from working in Myawaddy town in Myanmar and were now being treated in Mae Sot Hospital.

Dr Taweesilp said the outbreak had spread to all ages. "We now see the infections in babies," he said.


The government on Thursday announced that Covid-19 vaccinations would begin in Thailand in February.

exclude : to intentionally not include something - แยกออกไป

foreigner : a person from outside the country being talked about -

presumably : used for saying that you think something is true based on what you know, although you are not really certain - น่าเป็นไปได้, ซึ่งพอเป็นจริงได้