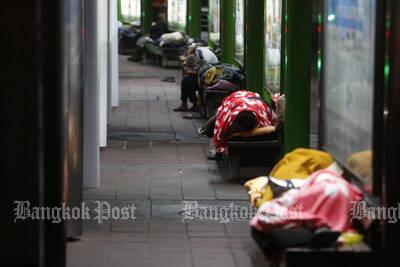 Homeless people sleep under blankets at a bus stop at Victory Monument in Bangkok on Wednesday, when the government announced 157 new Covid-19 cases. (Photo: Wichan Charoenkiatpakul)

The figures were down from the 287 cases reported on Tuesday, 278 of them local transmissions.

Taweesilp Visanuyothin of the Centre for Covid-19 Situation Administration, said four cases were quarantined arrivals from Iceland, the United States, Germany and Qatar, and 21 had arrived from Myanmar.

Among the new local infections, 24 were in Bangkok including a nine-month-old baby, 15 in Samut Prakan and 25 in Samut Sakhon.

Since Dec 15, less than a month, Dr Taweesilp said, 6,754 people had caught Covid-19 and they were in 60 provinces, with Phitsanulok the latest.

Of these people, 6,323 were local infections including 3,006 cases found through active case finding, and 2,996 had already recovered.

Of the total 10,991 cases since the pandemic hit the country, 6,943 had recovered including 211 discharged over the previous 24 hours, and 3,981 were receiving treatment. The death toll was unchanged at 67.