The popular Chinese e-commerce platform Taobao features a number of fast-track entry services at Suvarnabhumi and other airports from several agents, some of which claim to be former airport employees.

Sisdivachr Cheewarattanaporn, president of the  Association of Thai Travel Agents, said the image of the country was battered by the video of the illicit VIP service for a Chinese tourist who claimed to have purchased a police escort service from the airport to her hotel in Pattaya.

After the Tourism Authority of Thailand (TAT) said on Tuesday its offices in China could not find the ad offering these services, a Thai Facebook page named "Shoot to China", which has 1.4 million followers, immediately responded by posting reviews about VIP entry services on sale via the e-commerce platform.

Mr Sisdivachr said tourism operators are worried about the situation because it caused "a tremendous downgrade in public security confidence" when police officers who are supposed to offer public services instead decide to offer a business.

"We disagree with their actions, as it absolutely was not the right thing to do. In the past, police only helped escort and transport important persons, groups or invited national guests, as assigned by the government, without such illicit cases," he said.

"This is the first time this service was publicised. The reputation of not only the country, but also the Thai police has been damaged."

The Tourism and Sports Ministry found that members of the Tourist Police were involved in the viral video of the VIP escort. 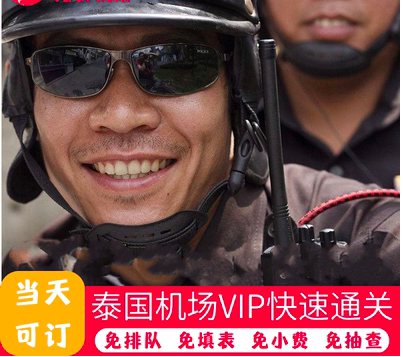 A screenshot captures a VIP escort service offered for sale on a Chinese e-commerce platform.

Meanwhile, Airports of Thailand (AoT) denied involvement with another case of VIP fast-track services at the airport after a vendor posted the airport ID card on the e-commerce platform, claiming to have connections at the airport, along with offers to help escort arrivals through the VIP fast lane for a fee of 100-698 yuan (around 400-3,000 baht)

The AoT said it did issue the ID card, but the employee is registered with a private organisation that runs a business at the airport. The AoT said it is not responsible for this employee.