Setting aquatic animals free near temples is a popular way of making merit, but it often results in overcrowded, unhealthy waters 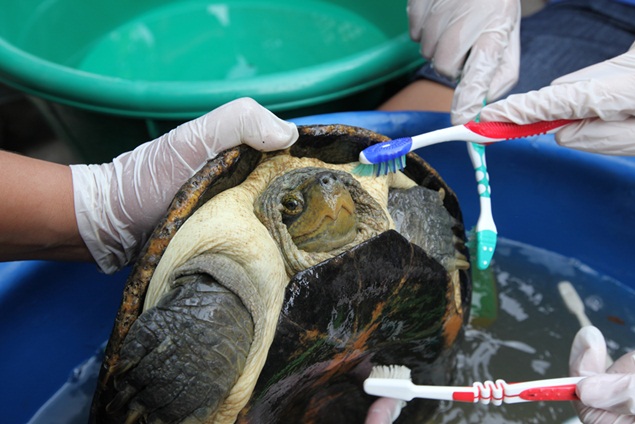 Veterinarians and volunteers clean up turtles that had been living in overcrowded conditions at Wat Bowon Niwet temple. APICHART JINAKUL

Setting captive animals and birds free is a popular way of making merit for Thai Buddhists.

For the release of aquatic animals, temples near rivers and ponds are popular locations for the merit-making activities.

One widespread problem that results, however, is the temple waters become overcrowded and polluted, leaving the animals in ill-health.

Yesterday, a group of volunteers and veterinarians from the Veterinary Medical Aquatic Animal Research Centre at Chulalongkorn University's faculty of veterinary science visited Wat Bowon Niwet Wihan in Bangkok's Phra Nakhon district and found many of turtles and fish were living in unhygienic conditions.

About 200 veterinarians and volunteers removed the fish and some 100 turtles from the murky water.

The turtles were cleaned up and given medicines if they were found to be sick. 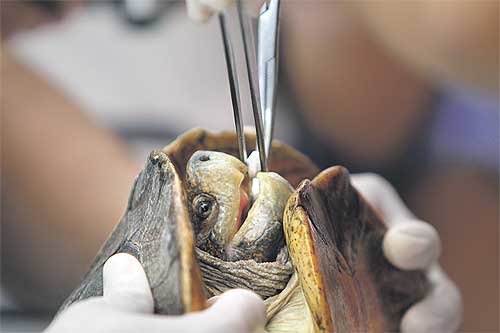 A turtle is given an anti-parasitic drug. APICHART JINAKUL

The animals will be kept at the centre until they have recovered and they will then be released into the wild.

Nantarika Chansue, the centre's director, said many temples had problems with animal overcrowding.

Ms Nantarika launched the project to rescue aquatic animals, mainly turtles, from the temples about 10 years ago when she was asked by an abbot to take care of turtles living in the temple's pond.

Several turtles there had died from blood infections as they had been living in polluted water.

Over the past 10 years, the centre has taken more than 20,000 turtles from temples in Bangkok and nearby provinces and released them into the wild.

Veterinarian Maetira Lerthipanwong, 27, said 80% of the turtles at Wat Bowon Niwet suffered bacterial and parasitic infections and liver disease as a result of living in the polluted water.

Adapted from a story in today's Bangkok Post by Apinya Wipatayotin.

veterinarian – a person with a medical degree trained to take care of the health of animals สัตวแพทย์
volunteer – someone who is not paid for the work that they do อาสาสมัคร
captive – being kept in a confined space popular ถูกกักขัง
popular – a situation in which someone or something is liked by many people เป็นที่นิยม, เป็นที่ชื่นชอบ
make merit – to do good things according to religious beliefs ทำบุญ
release – allowing someone/something to go free การปล่อย
aquatic – growing or living in or near water เกี่ยวกับน้ำ
pond – a small area of still water, especially one that is artificial บ่อน้ำ, สระน้ำ
location – where someone or something is ที่ตั้ง,ทำเล
widespread – happening or existing in many places, or affecting many people อย่างแพร่หลาย
research – a careful study of a subject, especially in order to discover new facts or information about it การวิจัย
faculty – a group of departments in a college which specialize in a particular subject or group of subjects คณะ
hygienic – clean and not likely to cause illness or disease ถูกสุขอนามัย
unhygienic – not hygienic
conditions – the circumstances or situation in which people live, work or do things สภาพการ, สถานการณ์
remove – to take something away เอาออกจาก
murky – not clear; dark or dirty with mud or another substance  มืดมนมาก
recover – to become healthy and fit again after an illness or injury การฟื้นไข้
launch – to start something เปิดโครงการ, เริ่มต้น, เริ่มทำ
rescue – saving a person or animal from a dangerous or unpleasant situation การช่วยชีวิต
abbot – the head monk at a temple เจ้าอาวาส
infection – a disease or medical condition that is caused by a bacteria or by a virus or a parasite การติดเชื้อ
the wild – living or growing in natural conditions; not kept in a house or on a farm สภาพธรรมชาติ
bacteria – the simplest and smallest forms of life. Bacteria exist in large numbers in air, water and soil, and also in living and dead creatures and plants, and are often a cause of disease แบ็กทีเรีย, เชื้อแบกทีเรีย
parasite – a plant or animal that lives in or on another type of animal and feeds on it ปรสิต, พยาธิ, พืชหรือสัตว์ที่อาศัยสิ่งมีชีวิตอื่น
liver – a large organ in the body that cleans the blood and produces bile  ตับ
ignore – to fail to pay attention to; to pretend that you have not noticed or do not know about something เพิกเฉย