Withaya Chai-Auari, 32, and Suriya Khoksombat, 25, should not be too surprised that they are in a Bangkok jail today. Making illegal guns and selling them through Facebook is a risky business. 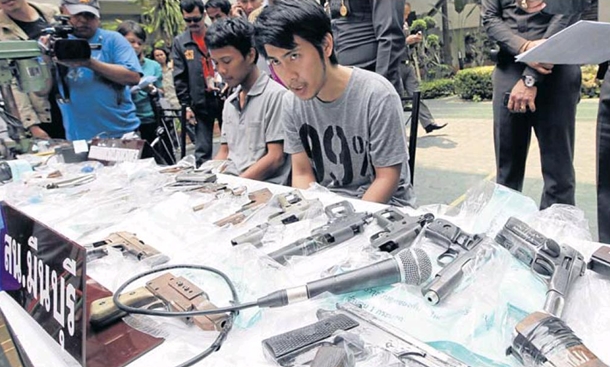 Two suspects, Suriya Khoksombat, 25, sitting, left, and Withaya Chai-Auari, 32, sitting, right, are taken before reporters with the guns they allegedly produced and traded on Facebook. The men were nabbed in Bangkok yesterday and taken to the Metropolitan Police Bureau. APICHART JINAKUL

Making and selling illegal guns is a risky business, especially when your customers are largely vocational college students and other teenagers.

Trying to expand your market through Facebook only increases the risk since police regularly monitor the internet for illegal activities.

Thus, Withaya Chai-Auari, 32, and Suriya Khoksombat, 25, should not be too surprised that they are in a Bangkok jail today.

An undercover police officer posing as a customer contacted Mr Withaya on the internet to buy weapons. Mr Withaya turned up for the meeting with the guns in Phahon Yothin Soi 55 and was immediately arrested, police said.

Police later searched his apartment in Bang Khen district and found a large quantity of firearms including a homemade Thai Pradit gun, a pen gun, two grenades and more than 100 rounds of ammunition.

Mr Withaya said he was the salesman, selling on Facebook weapons made by Mr Suriya, police said.

According to police, he told them he checked the backgrounds of potential customers before adding them to his list of friends and accepting firearms orders.

Mr Suriya is a highly-skilled gun maker, police said. The suspect said he repaired and reconditioned homemade guns for a fee. He said he had made guns to order for seven months, selling them for between a few thousand baht to over 10,000 baht each.

His customers included many vocational college students and teens, and he had sold about 100 guns, police said.

The pair were charged with the production and trading of firearms.