"The pink taxi of legend”

The driver of a pink taxi made famous through the social media for his violent, rude and criminal behaviour has finally been arrested. 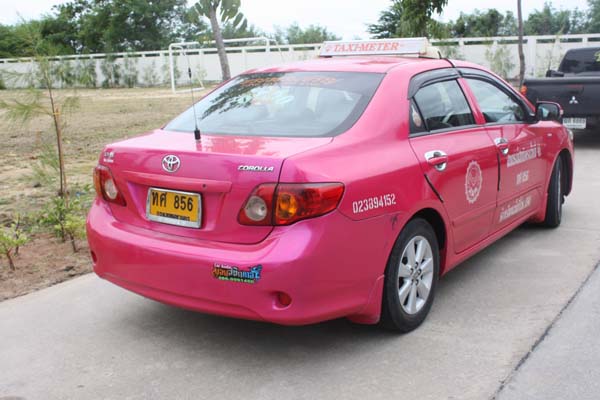 "The pink taxi of legend”

Last June, singer Jirayuth “Max” Kanthayos went onto Instagram to tell of his experience with the driver of a pink taxi.

He alleged the driver almost assaulted him and then extorted money from him.

Mr Jirayuth said the driver was dangerous and was using a pink taxi cab with the licence plate Tor Sor 856 Bangkok.

Soon others began reporting similar experiences with the same taxi driver, posting their stories on the popular webboard pantip.com where the driver became known as driving “the pink taxi of legend”.

Several victims claimed they had been assaulted, extorted or subjected to the driver's bad manners.

One recent victim said the driver kicked and banged her car after she refused to let him cut into her lane near Makkasan Airport Rail Link Station.

Yesterday afternoon, acting on a tip-off, police in Muang district of Samut Prakan, stopped the pink taxi and arrested the driver.

The man was identified as Thanes Boonsermsub, 37. He was arrested at a police checkpoint.

Mr Thanes told police he was a military officer but drove a taxi to boost his income, Wichit Boonchitwuthikul, chief of Bang Pu police station, said.

Mr Thanes admitted he had undergone treatment for a mental disorder at Somdet Chaopraya Institute of Psychiatry but was now fully recovered.

He admitted to arguing with passengers and assaulting several of them because they were demanding and difficult to handle.