Judging from first two words in the title, "I fine" (it should be "I'm fine"), you won't learn a lot of English from this movie about an English class, but you will laugh. 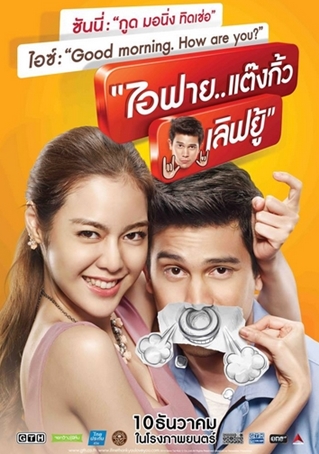 If you are wondering about the image, when pronounced with a 'Thai' accent, "I fine" is "Ai fai" and means "you're a buffalo" in trendy Thai jargon.

Judging from first two words in the title, "I fine" (it should be "I'm fine"), you won't learn a lot of English from this movie about an English class, but you will laugh.

The romantic comedy, "I Fine, Thank You, Love You", the latest film from GTH, grossed 29.17 million baht in ticket sales on its opening day – the second-highest ever for a Thai movie.

The plot centres on a teacher, Pleng, who is asked by a Japanese student leaving for the United States to tell her boyfriend Yim she wants to break up with him.

Yim then blames Pleng for perfecting his girlfriend's English skills and nags her to teach him to speak English, so that he too can go to the US and get his girl back.

The tutor initially does not want to teach Yim, a factory worker, but she later agrees to help him. As the English lessons continue the two start to learn about each other and gradually fall in love.

Much of the humour centres on the Thai students' hilarious and unsuccessful attempts to grapple with the English language – pronoucing "H" for example. (That's "eɪtʃ")

Ultimately, however, it's the love story that holds things together. You can learn your English here at the Bangkok Post learning channel.

Adapted from a story by our online reporters.