The Land Transport Department has ordered GrabBike to suspend services until it complies with rules. (Grab Thailand photo)

The Department of Land Transport has ordered GrabTaxi Holdings Pte to halt its GrabBike service in Thailand until it follows local rules.

Over the past two years, Land transport authorities have introduced a long set of rules governing Bangkok's large army of motorcycle-taxi drivers. Drivers must be properly licensed, wear bright coloured vests, wear helmets and charge fees according to published rates.

Thus, it is not surprising that the authorities are not welcoming competitors entering the market. In fact, the newest service, GrabBike, run by the popular GrabTaxi company, has been ordered to suspend its service.

Like its parent, GrabTaxi, customers order their rides through smartphones. However, the Department of Land Transport says the GrabBike service does not comply with regulations covering other motorcycle taxi drivers.

DLT deputy director-general Nunthapong Cherdchoo says his department took particular issue with using private motorcycles to carry passengers, the payment method and fares charged which, he said, did not comply with published rates.

He warned that such services were jeopardising security, safety and local transport systems because they created unfair competition, their motorcycles were not covered with accident insurance for passengers and drivers' criminal records were not checked by the government. 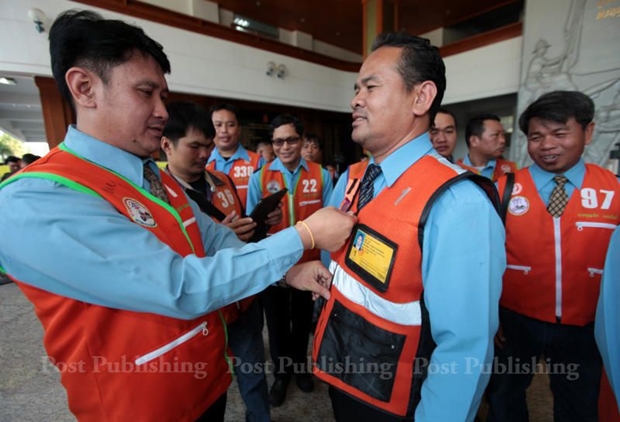 The motorcycle taxi drivers you see on the streets must follow a long list of regulations. CHANAT KATANYU

He said the department is not against applying technology to public transit services, but they must comply with current laws. The DLT asked GrabTaxi to suspend its GrabBike service – launched in August in Bangkok – until changes were made to meet regulations.

He added that soldiers, police and Bangkok authorities would arrest violating drivers and fine them at the highest rates if caught.

Now the question is what will authorities do about a second motorcycle-taxi service, UberMoto service, which was launched last month?

Adapted from a story by our online reporters.