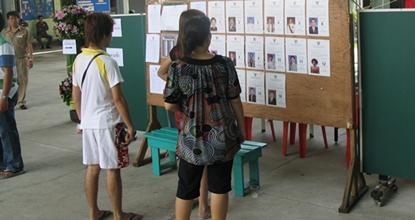 Just enough vocabulary and information to get you started with the Bangkok Post's coverage of the upcoming July 3 general election. 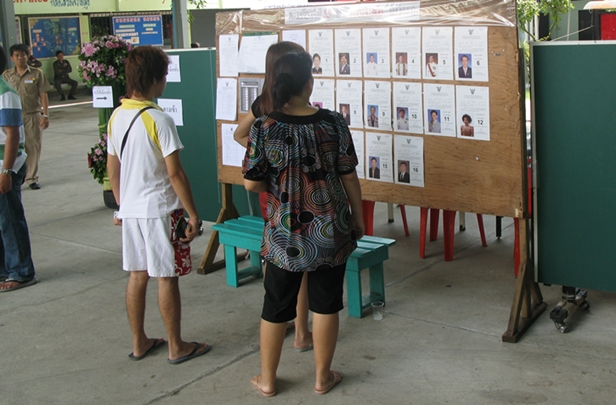 Let’s start with the most basic vocabulary of all. A good place to begin is with the word election itself which you certainly must know already. The verb form is elect and the adjective form is electoral as in the electoral system or the electoral process. You may even see some other forms of the word, like electioneering which refers to all the different ways of trying to get people to support you in an election.

The people who do the electing, of course, are the voters – or more specifically, the eligible voters, i.e., the people who have the right to vote. In Thailand's case this means Thai citizens who are 18 years old or more.

Another term that is used to refer to an election is poll or the polls. People go to the polls on election day where they vote at polling stations. There, they receive ballots, the pieces of paper that they mark to vote. When they have made their choice, the put their ballots in the ballot box. Another way of saying this is that they cast their ballot, a fancy way of saying vote.

election (n) the process of choosing a person or a group of person for a position, especially by voting  elect (v)  electoral (adj) synonym: the polls การเลือกตั้ง
electioneering (n) – the activity of making speeches and visiting people to try to persuade them to vote for a particular politician or political party กิจกรรมหาเสียงของพรรคการเมือง
eligible voters – people who have the right to vote in an election ผู้มีสิทธิ์เลือกตั้ง
polling station – the place where people vote in an election หน่วยเลือกตั้ง
go to the polls – to go to the polling station to vote ไปลงคะแนน, ไปเลือกตั้ง, ไปออกเสียงเลือกตั้ง
ballot – the piece of paper on which someone marks who they are voting for บัตรเลือกตั้ง
ballot box – the containing into which voters put a marked ballot หีบบัตรเลือกตั้ง
cast a ballot – to vote, i.e., to put a marked ballot in a ballot box ลงคะแนน, หย่อนบัตรเลือกตั้ง, ออกเสียงเลือกตั้ง

The purpose of the July 3 general election is to elect members of parliament (MPs). Each MP fills a parliamentary seat. The people competing for these seats are called candidates. The pre-election competition is often called a race and we say that the candidates run for election.

In Thailand, there are two types of candidates, meaning that each voter casts two ballots. The candidates best known to the voters are those who are vying to represent a constituency, or an election district. But Thailand also has what is known as a proportional representation or party list system. Altogether, 500 parliamentary seats are up for grabs on July 3, 375 in constituencies and 125 on the party list.

Under the proportional representation system political parties select candidates for voters to choose. The number of them who are actually elected to parliament depends of the percentage of the vote their party obtains. It takes 250,000 votes to elect one party-list MP.

Under the proportional representation system, small parties are at a big disadvantage since they are unable to garner enough votes to elect party-list MPs. That is one reason why we have seen some party mergers this year and some veteran politicians defecting from small parties to larger parties. Even the larger parties have weaknesses, however. Few of them of them are capable of contesting the election nationally. Most have their own limited bastions or strongholds of support.

candidate – a person who is trying to be elected ผู้สมัครรับเลือกตั้ง
race – a situation in which a number of people, groups, organizations, etc. are competing, especially for political power  การแข่งขัน, การหาเสียง
run for election – to compete for an elected position ลงสมัครรับเลือกตั้ง
vying (from the verb vie) – to compete strongly with someone ลงแข่งขัน, ลงชิง(เก้าอี้สส.)
constituency – a district that elects its own representative to parliament เขตเลือกตั้ง
proportional representation (party list) system – a system that gives each party in an election a number of seats in relation to the number of votes its candidates receive ระบบสัดส่วน, ระบบปาร์ตี้ลิสต์
up for grabs – available to be won มีให้ชิงชัยกัน
political party – a political organisation that you can vote for in elections and whose members have the same aims and ideas พรรคการเมือง
garner – to obtain; to get ได้รับ, รวบรวมได้
merger – the act of joining two or more organisations or businesses into one การรวมเข้าด้วยกัน
veteran – a person who has a lot of experience in a particular area or activity (สส.)หน้าเก่า, (สส.)หลายสมัย, ผู้อาวุโส, ทหารผ่านศึก
defect – to leave one political party to join another ออกจากพรรค
contest – to take part in an election or other competition ลงแข่ง, ลงรับเลือกตั้ง
bastion; stronghold – an area where there is a lot of support for a political party  ฐานเสียง, ฐานที่มั่น, ขุมกำลัง 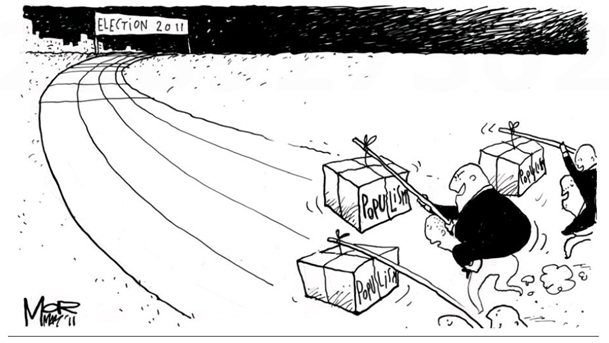 Political parties are very important in Thailand. They field the candidates, help them campaign and they form the government that results from the election. In an attempt to persuade, or woo, voters to vote for their candidates, they announce their party policies in what is known as their platform or manifesto. 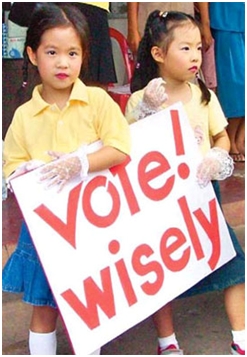 The election campaign is a time of promises. Political candidates pledge to benefit their constituents in many ways. They vow to provide better jobs, better schools, better transport, better this and better that. In recent years these promises have come in the form of specific programmes aimed at the grassroots level, populist programmes like the one-million baht village fund, 30-baht universal medical care, cheap loans for first-time home-buyers and 500 baht per month allowances for senior citizens (old people).

Rural voters still outnumber those in urban areas, so they get a lot of attention during election campaigns.  Here canvassers are especially important. They are directly responsible for mobilising support for political parties and candidates, encouraging voters to attend rallies and, of course, to go to the polls on election day. Long before the campaign, rival parties often find themselves competing for the most effective canvassers.

Once the campaign begins, opinion surveys, or polls, are held frequently so it doesn’t take long for people to get an idea of which parties are the front-runners and which are the underdogs. There are always shocks in elections, however, so don’t be surprised if some of the underdogs pull an upset victory. Many constituency races are likely to be very close, with two or three candidates running neck and neck.

field – to provide a candidate to represent you in an election ส่งคนลงสมัคร
campaign – to take part in a planned series of activities (a campaign) designed to persuade voters to vote for a particular candidate or political party รณรงค์หาเสียง
woo – to try to get the support of someone หาเสียง, ขอคะแนน
policy – a set of plans or action agreed on by a government, political party, business, or other group นโยบาย
platform; manifesto – the aims of a political party and the things they say they will do if they win an election นโยบาย
pledge – to make a serious promise สัญญา
constituent – a person who lives, and can vote in a constituency ผู้มีสิทธิ์ลงคะแนน, ผู้มีสิทธิ์เลือกตั้ง
vow – to make a formal and serious promise to do something สาบาน, ปฏิญาณ
grassroots – involving the ordinary people rather than their leaders ในระดับรากหญ้า, ชาวบ้าน
populist – related to the type of politics that claims to represent the opinions and wishes of ordinary people or to support programmes that will benefit the ordinary people ประชานิยม
allowance – an amount of money that someone receives in order to pay for the things that they need  เงินสนับสนุน
rural – connected with the countryside outside big towns and cities  ในชนบท, บ้านนอก
urban – connected with towns and cities ในเมือง
canvasser – person whose job is to try and get support for a candidate or political party in a particular area หัวคะแนน
mobilise – organising a group of people to do something เกณฑ์, รวบรวม, ระดมกำลัง
rally – a large public meeting held to support a particular candidate or political party การชุมนุม, ประชุม
rival – competing; opposing คู่แข่ง
front-runner – the leader in an election or a competition ผู้ที่มีคะแนนนำ
underdog – a political party, person or group that seems unlikely to win an election or other competition พรรค/คน/ทีมที่เป็นรอง, เบี้ยล่าง, รองบ่อน
upset victory – an unexpected win over an opponent thought to be stronger ชนะโดยไม่คาดฝัน, พลิกล็อก
neck and neck – involved in a very close election or competition คู่คี่, สูสี

Election day and beyond

On election day voters go to their polling stations to cast their ballots. One of the big numbers that everyone watches for as the ballots are counted is the turnout, the percentage of eligible voters who actually vote. The election results are described as election returns or the outcome of the election.

Don't expect the election to be completely finished on election day. The Election Commission will likely have deal with many complaints of election fraud in the constituency voting and the commissioners will likely issue quite a number of yellow cards and even red cards. Both will require new polls (or by-elections) to be held.

Once the election outcome is known, attention turns to the formation of a new government. This year, it is very unlikely that a single party will win an absolute majority of the seats in parliament. Instead, the next government is likely to be a coalition made up of two or more political parties.

Forming a coalition is often a lengthy and complicated process. The various parties involved will often bargain very hard for choice cabinet seats.

Even after a government is formed, there is no guarantee it will be allowed to function smoothly. Political parties making up the coalition, or factions within these parties, may be dissatisfied with the cabinet positions they have been allotted and they may eventually withdraw their support for the government. The current constitution makes it rather easy for opposition parties to censure government ministers – especially the prime minister – and this can also lead to government instability.

turnout – the number or percentage of eligible voters who vote in an election จำนวนผู้ออกมาลงคะแนน
returns – the results of an election ผลการเลือกตั้ง
outcome – the results of an election ผลการเลือกตั้ง
absolute majority – more than half the total number ข้างมาก, ส่วนใหญ่
Election Commission – the independent government agency in charge of calling elections, setting the election rules and ensuring that the election is free and fair คณะกรรมการเลือกตั้ง
election fraud – the crime of cheating in an election การโกงการเลือกตั้ง
issue – to officially announce or give out  ออก, แจกจ่าย,  ออกคำสั่ง
yellow card – a situation where there is evidence that a candidate has acted improperly and a by-election must be called. The yellow-carded candidate is allow to compete in the by-election.
red card – a situation where the Election Commission has determined a candidate has cheated in the election and is not allowed to compete in the by-election.
by-election – an election held to fill an empty seat in parliament  การเลือกตั้งซ่อม
coalition – a government formed by two or more political parties working together รัฐบาลหลายพรรค
choice – of very good quality หัวกะทิ, ชั้นหนึ่ง, ดีที่สุด
cabinet – the group of government ministers who make or approve government policies คณะรัฐมนตรี
faction – a small group of people within a large one ก๊ก, มุ้ง, ฝ่าย
allotted – given as a share of what is available แบ่งส่วน, จัดสรร, กำหนดให้
withdraw – to take away; to stop taking part in something ถอนตัว
constitution – the set of laws and basic principles that a country in governed by รัฐธรรมนูญ
opposition party –a political party that is not part of the government or a group which is against the government พรรคฝ่ายค้าน
censure – to formally criticise a cabinet minister in a parliamentary session after which members vote to support or reject the ลงมติไม่ไว้วางใจ