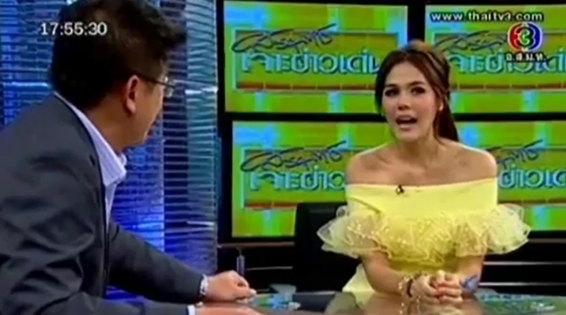 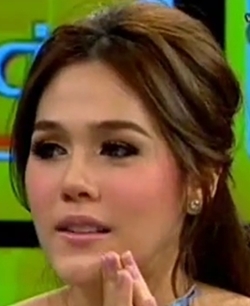 The “talk of the town” this week has been the controversial soap opera Doksom Sithong.

The controversy stems from what some parents see as "inappropriate content" and there have been calls to have this content censored or removed.

Bangkok Post feature writer Ploenpote Atthakor, who does not like the show, summarises the soap this way:

“Reya's success requires the feeble-mindedness of men she targets, and the desperate mia-luang – typical characters in Thai soap opera as mia noi has become an indispensable character.

“What makes Doksom different from the other previous productions is, perhaps, the excessive love scenes involving Reya and her men.”

Not surprisingly, actress Chompoo, has a much higher opinion of the story.

Speaking to Sorayut Suthasanajinda, the well-known Thai news anchor, she said “all the characters in the story are real people, not pure white and pure black that you see in many soaps. There are greys as well, leading characters who have weaknesses. These are people who we meet in society. It is a reflection of Thai society.

“ Reya, herself, has her good points. She is high in confidence although the methods she uses to gain her objectives are not the most appropriate, perhaps a result in a weakness in her upbringing.”

Chompoo said the part of Reja was extremely challenging, a role she wanted to try.

When asked how she would feel if controversial scenes were cut, she said she would be disappointed.  “Each scene, each line of dialogue, teaches us about society and can speak for women throughout the world,” Chompoo said.”

“Some of the language may seem strong, but it is real.”

Chompoo added she had talked to a real minor wife who told that her everything Reya said, she, herself, had said in real life.

Significantly, Chompoo said the story may cause women who are thinking of becoming minor wives, the think twice.

defend – to say things to support someone or something ปกป้อง
controversial – causing disagreement ซึ่งก่อให้เกิดการโต้แย้ง
soap opera – a story about the lives and problems of a group of people which is broadcast every day or several times a week on television or radio  เรื่องน้ำเน่า
news anchor – a person who presents a television or radio programme, especially the news ผู้สื่อข่าว ผู้ประกาศข่าว
stem from – to be caused by เกิดจาก
inappropriate – unsuitable ซึ่งไม่เหมาะสม
remove – to take something away เอาออก
feature –  (in newspapers, on television, etc.) a special article or programme about somebody/something  สารคดีพิเศษ
summarise – to give a statement of the main points สรุป
lure – to attract someone/ something ล่อใจ, หลอกล่อ, ยั่วยวน
classic – with all the features you would expect to find; very typical เป็นแบบอย่าง
theme – the main subject of something ใจความสำคัญ, ประเด็นหลัก
feeble-minded – having less than usual intelligence; weak and unable to make decisions ปัญญาอ่อน, โง่, งี่เง่า
target – to direct something at someone or something ตั้งเป้าหมาย
desperate – very worried or confused because you do not know how to deal with an unpleasant or dangerous situation อย่างสิ้นหวัง  อย่างหมดหวัง
typical – happening in the usual way; showing what something is usually like ตามแบบฉบับ, ตามปกติ
character – a person in a book, play, film etc ผู้สวมบทบาท,  ตัวแสดง
indispensible – difficult or impossible to exist without or to do something without ซึ่งขาดไม่ได้, ซึ่งจำเป็น
excessive – much greater than is usual; too much of something   มากเกินปริมาณที่พอดี
opinion – your feelings or thoughts about somebody/something, rather than a fact ความเห็น, ความคิดเห็น, ทัศนคติ
reflection – a sign that shows the state or nature of something  การสะท้อน
confidence – the quality of being certain of your abilities ความมั่นใจ
objective – what you plan to achieve; goal; aim; purpose เป้าหมาย
upbringing – the way in which a child is cared for and taught how to behave while it is growing up  การเลี้ยงดูอบรมสั่งสอน
challenging – difficult, in a way that tests your ability or determination ที่ท้าทายความสามารถ
role – an actor's part in a film or play บทละคร
disappointed – unhappy because someone or something was not as good as you hoped or expected, or because something did not happen ผิดหวัง
dialogue – conversations in a book, play, or film/movie บทสนทนา,  บทพูด
significantly – in an important way อย่างสำคัญ
think twice – to think about a decision or a plan again and perhaps change your mind ไตร่ตรองอีกครั้ง