Lookalike haircuts are no longer a must for Thai schoolboys and girls and Education Minister Phongthep Thekpkanchana is a popular man as a result. 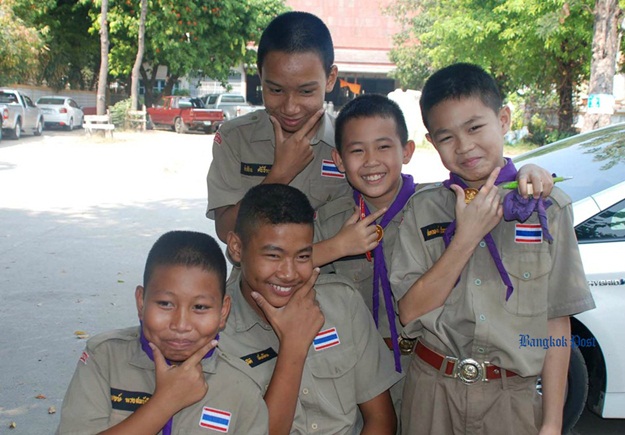 At least some of these students are likely to have different-looking haircuts in the near future. CHINNAWAT SINGHA

Lookalike haircuts are no longer a must for Thai schoolboys and girls and Education Minister Phongthep Thekpkanchana is a popular man as a result.

Mr Phongthep issued an order on Wednesday abolishing strict limits on the length of students' hair after receiving a number of complaints from students who complained they are punished in school for having long hair.

A 1972 regulation requires all schoolboys to wear crew cuts no longer than five centimetres and female students to have hair no longer than the base of their neck. This is the rule most schools still adhere to.

However, the Education Ministry issued a second ministerial regulation in 1975, allowing students to have longer hair, but stipulating that it must look tidy.

Mr Phongthep ordered all schools to treat their students the same under the 1975 ministerial regulation, saying schools should allow male students to have long hair that looks neat and clean-cut while female students can choose to have short or long hair.

Kiettisak Chu-in, a Mathayom 1 (Grade 7) student of Matthayom Wat Makut Kasattriyaram School, said he and his classmates were very pleased that the school would now allow them to sport longer hair.

"We have had crew cuts since we were in primary school. Now we don't need to have our hair cut every month," Kiettisak said.

Chollada Sukjitmalee, a Mathayom 5 student at Satriwittaya School, said she was also glad that her school would let students have longer hair.

"Having long hair makes me feel free. As soon as my school announces that it is ready to obey the education minister's order, I will let my hair grow long. But when I go to school I will tie my hair tidily," she said.

School administrators were less enthusiastic, however.

Alongkorn Niyakit, deputy director of Matthayom Wat Makut Kasattriyaram School, said he received the order and would comply with it even though he personally disagreed with it.

Mr Alongkorn said the 1972 ministerial regulation is a good rule because the crew cuts make students look tidy and differentiate them from adults.

Adapted from a story in today’s Bangkok Post by Nawreen Ngoh.

lookalike – of a person/thing that looks very similar to the person/thing mentioned  คล้ายคลึง, ดูเหมือน
popular – a situation in which someone or something is liked by many people เป็นที่นิยม, เป็นที่ชื่นชอบ
issue – to announce something officially ออกประกาศ
abolish – to officially get rid of a law, system, practice, etc. ยกเลิก
strict – very careful and exact, demanding that a rule be obeyed เข้มงวด
limit – the greatest or smallest amount of something that is allowed ขีดจำกัด
complaint – when someone says that something is wrong or not satisfactory การร้องเรียน
punish – to make somebody suffer because they have broken the law or done something wrong ทำโทษ
regulation – an official rule that controls the way that things are done กฎระเบียบ
crew cut – a hairstyle for men in which the hair is cut very short  ทรงผมของผู้ชายที่สั้นมาก
base – the bottom part, edge, or surface of something พื้นฐาน, รากฐาน
neck – the part of the body between the head and the shoulders  ลำคอ (อวัยวะ), คอ
adhere to – to obey a rule, law, agreement, etc. ทำตามกฎหมายหรือกฎระเบียบ
stipulate – to state exactly how something must be or must be done ระบุ, ระบุเงื่อนไข
tidy – arranged neatly and with everything in order ที่เป็นระเบียบ,  ที่เป็นระเบียบเรียบร้อย
treat – to behave in a particular way towards somebody/something ปฏิบัติ(ต่อ)
neat – tidy and in order; carefully done or arranged   เรียบร้อย, เข้าที่เข้าทาง, เป็นระเบียบ
classmate – a person who is or was in the same class as you เพื่อนร่วมชั้นเรียน
sport – to have or wear something; to have or wear something in a proud way สวมใส่
primary school – a school for young children usually between the ages of 5/6 and 11 โรงเรียนประถมศึกษา
obey – to do what you are told or expected to do เชื่อฟัง, ทำตามคำสั่ง
administrator – someone whose job is to manage a business, organisation, or institution  ผู้บริหาร
enthusiastic – excited about something   กระตือรือร้น
deputy – a person whose rank is immediately below that of the leader of an organisation รอง
comply – to obey a rule or law or do what someone asks you to do  ปฏิบัติตาม (กฎหมาย, ข้อเสนอ, etc.)
differentiate – to see or show a difference between things แยกแยะระหว่าง
adult – a fully grown person who is legally responsible for their actions  ผู้ใหญ่