To the villagers at Ban Sa-iap, in Song district of Phrae province on Wednesday, something was not right about a car travelling slowly through their area. 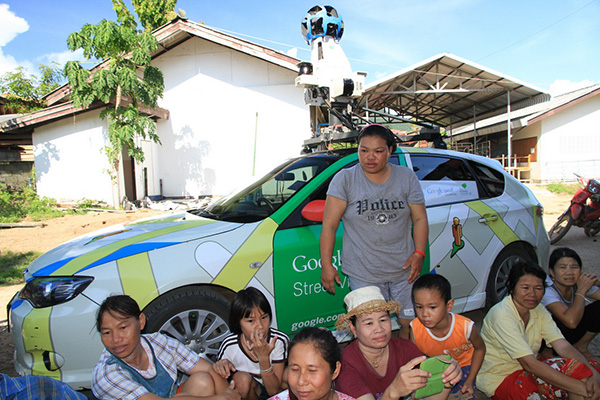 Sa-iab villagers in Song district of Phrae province stay with a Google car entering their village.

To the villagers at Ban Sa-iap, in Song district of Phrae province on Wednesday, something was not right about a car travelling slowly through their area.

It had a large, high-tech camera on the roof attached to a turret and the car appeared to be full of equipment.

The only explanation, the suspicious villagers thought, was that the driver had been sent by the government to conduct a survey for a controversial dam project that has stirred much local opposition. 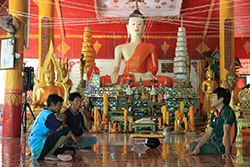 Deeprom Phongphon, right, a Google worker is taken by villagers to swear at a temple that he was not working for a government on Tuesday.

They surrounded the man's car and questioned him.

The man vehemently denied he had anything to do with a dam survey. Instead, he worked for a company called Google and he was photographing the area for something called "Street View" which they could soon see on the internet.

Not completely satisfied, the villagers took him to Wat Don Chai in the village to swear in front of a statue of Buddha that he was not working for the government.

Devout locals said the man would face bad luck within a week if he lied in front of the Buddha's image.

Later, when it was confirmed that the man was really a Google Street View worker, the villagers apologised.

The villagers also said in a statement on a Facebook page for locals opposing the Kaeng Suea Ten dam that they welcome Google if the firm sends a worker to the area in the future.

A scene from Google Street View at the edge of Chiang Mai city. Similar scenes should soon be available from Phrae.


Launched in 2007, Google Street View is a programme giving panoramic street-level photographs of towns and cities across the world, allowing viewers to take virtual tours.