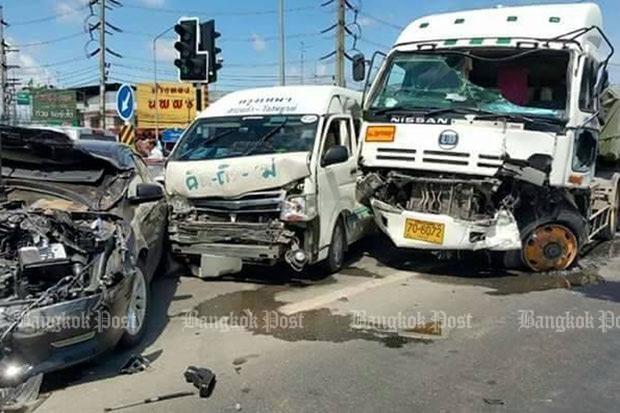 Five people were hurt when this truck smashed into cars at a red light in May. Thailand this year posted the second-highest road-fatality rate in the world, the World Health Organization said. (Bangkok Post file photo)

A lack of key safety standards and poor enforcement of laws already on the books have combined to give Thailand the second-highest road fatality rate in the world, according to a new World Health Organization (WHO) survey.

However, road fatalities in Thailand were far higher than officially reported, the WHO concluded.

The WHO estimates 24,237 were actually killed in 2012 based on its models, 42% more than stated by Thailand's Public Health Ministry.

The lack of standards is particularly noticeable in Thailand:

1. There is no child restraint law (e.g. safety seat or seat belt for children).

2. There are no safety audits for new road construction projects.

3. There are no regular inspections of road infrastructure.

4. Thailand has no policies to separate motorists from pedestrians and cyclists (e.g. to keep motorcycles off sidewalks used by pedestrians).

5. Thailand's national seat-belt law does not apply to all passengers in a car.

Traffic police were rated three on a scale of 10 for their enforcement of speed limits.

Police earned sixes for enforcement of drink-driving and motorcycle-helmet laws.

Yet the status report said only 52% of motorbike drivers -- who accounted for 70% of all road and highway fatalities  - actually wear a helmet.

Only 20% of the people riding on the back of motorcycles (pillion passengers) wore helmets.

That mark, however, was a significant increase from the 3% wearing helmets recorded in 2007.

As for drink-driving, 26% of all road deaths can be attributed to alcohol, the WHO said.

MOTORCYCLISTS, PEDESTRIANS HALF OF ALL DEATHS

Worldwide, nearly half of all those killed in traffic accidents are either walking or on two wheels, the new report showed, with pedestrians accounting for 22% of all deaths, motorcyclists making up 23%, and cyclists 4%.

The WHO report found that road safety had improved significantly in countries with laws regulating five risk factors: speed, drunk driving, and the use of helmets, seatbelts and child seats.

The WHO recommends that the maximum speed in urban areas should be set no higher than 50 kilometres per hour. Thailand's maximum urban speed limit, by comparison, is 80km/h. Its rural and highway limits are even higher at 90km/h and 120km/h, respectively, although local authorities can set lower limits.

Here are some road safety articles over the last year:

2. "Motorcycle ban for young children sparks debate" talks about the common practice of children riding on the backs of motorcycles without helmets (see here).

3. "Thailand to get longest bicycle lane in Asia by 2017 (with photos)" shows how bike lanes are blocked by motorcycles and cars (see here).

4. "Taxi hits bicycle: What happens next?" shows how neither police nor insurance companies are likely to help cyclists hit by cars (see here).

5. "British man falls down open sewer manhole in Pathum Thani" shows negligence in road repair, how an government repair crew neither marked an open hole or put a cover back on it when finished (see here)

6. "Actress driver of Mercedes that killed policeman" details how a motorcycle cut in front of an actress's Mercedes while travelling at 100 kph, causing her to lose control of the vehicle, which she then ran into a parked police car on the side of the road, killing the police officer sleeping inside (see here).

7. "Driving behaviour: Move over. This is my road!" shows how aggressive driving can cause accidents (see here).

8. "Car rams motorbike in Pattaya (video)" shows a car actually aiming at and hitting a motorcyclist and his girlfriend on purpose (see here).

9. "Orachorn loses appeal in expressway crash that killed 9" shows how an underage driver from a rich family receives hardly any punishment at all for an accident that kills nine people (see here)

Click "play" to listen to Thailand's roads second-deadliest in world, UN agency finds and "Download" to keep this file for educational purpose.

accounted for : all the things or people who should be there are now there -

apply to (verb): to use something or make something work in a particular situation - ทำให้เกี่ยวข้องกับ, ทำให้มีผลต่อ, นำไปใช้กับ

attribute to : to believe that something is the result of a particular situation, event, or person’s actions - ถือว่าเป็นของ

audit : to inspect something to see if it is done correctly -

combined : to mix or put together - รวมกัน

comparison : the process of comparing two or more people or things - การเปรียบเทียบ

cyclist : a person who rides a bicycle - นักขี่จักรยาน

drink-driving (noun): driving a vehicle after drinking too much alcohol (American: drunk-driving) - ขับรถในขณะเมาเหล้า

enforcement : the process of making sure that something happens, especially that people obey a law or rule - การบังคับใช้กฎหมาย

factor : a fact or situation which influences the result of something - ปัจจัย

helmet : a strong hard hat that covers and protects the head - หมวกกันน็อก

infrastructure : a set of systems within a place or organisation that affect how well it operates, e.g., the telephone and transport systems in a country or the system of train tracks that a railway uses - สาธารณูปโภค

inspection : an official process of checking that things are in the correct condition or that people are doing what they should - การตรวจสอบตรวจตรา

lack of : when there is not enough of something - ขาด

marks : a grade or score that shows how well a student (or person or organization) has done in a test or the performance of some task -

model : a simple description of a system, used for explaining how something works or calculating what might happen, etc - แบบจำลอง

note : to notice or pay careful attention to something - สังเกต

official : connected with the job of somebody who is in a position of authority - ที่เป็นทางการ

on the books : meaning that a law has existed or exists -

passenger : someone who travels in a motor vehicle, aircraft, train, or ship but is not the driver or one of the people who works on it - ผู้โดยสาร

pedestrians : people who are walking, especially in an area where vehicles go - คนเดินถนน, คนเดินเท้า

policy (noun): a set of plans or action agreed on by a government, political party, business, or other group - นโยบาย

post : to put a notice, etc. in a public place so that people can see it - ปิดประกาศ

rate : to make a measurement/estimate of how good, popular, appropriate, etc. someone or something is - ประเมิน

recommend (verb): to advise someone that they should do something - แนะนำ

regular (adj): normal; following a pattern, especially with the same time and space in between each thing and the next - ปกติ, เป็นประจำ, เสมอๆ

restraint (noun): something that prevents you from doing something; something that holds you and physically controls your movements - การจำกัด, การยับยั้ง, การกัก

scale : a range of levels or numbers used for measuring something - ระบบการวัด

speed limits : the highest speed a car can go without breaking the law, laws limiting speed -

state : to formally write or say something, especially in a careful and clear way - บอกกล่าว, แถลง, กล่าว

statistics : a collection of information shown in numbers - วิชาสถิติ

translate : to change something, or to be changed, into a different form - เปลี่ยน, แปร