The 'Riviera of the East' will link both coasts and dozens of tourist attractions by road and rail.

Following a mobile cabinet meeting to Chumphon and Ranong last month, various bodies are coming up with ideas to promote coastal attractions further south on the western coastline as an extension to the already popular destinations in Cha-am and Hua Hin districts.

The ambitious idea has already been turned into a tourism development scheme called "Thailand Riviera" to link existing coastal tourist attractions in the four provinces and introduce more unseen ones to visitors, and so generate more tourism income in less known destinations, Tourism and Sports Minister Weerasak Kowsurat said.

"Thailand Riviera is basically a tourism development project in a vertical line running along the Tanao Si Range, Phetkasem Road and the southern railway," he said.

"New roads will then be built to allow better access to the magnificent views along the coastline and at the same time help ease traffic on Phetkasem Road.

"Each of the major train stations along the coastline will be renovated to make them worthy of a photo shoot," he said.

Local fishing communities and nearby natural tourism sites such as trekking paths will be included in tour packages designed for tourists who may want to leave their belongings with a luggage storage service at any of the train stations and drop by these unseen attractions during their train trips.

"The geographical location of the Royal Coast project, the official name of Thailand Riviera, has potential to be developed into a resort coastline similar to the French Riviera and Italian Riviera," said Thanasorn Dokduea, chief of Prachuap Khiri Khan's provincial tourism and sports office.

The project is designed to be a sustainable tourism development based mainly on car and train travel, he said.

So transport development is an important element in the implementation of this project, which will attract high-end tourists to attractions along the western coastline, he said.

The Department of Rural Roads had surveyed the location for a plan to build a minor road that will run along the western coastline, said Phaibul Ruangyuwanon, director of the Prachuap Khiri Khan Rural Road Office.

On certain spots along the road, there will be sufficient scenic points for tourists to stop and enjoy the view and cycling tracks connected to tourist attractions in the nearby communities.

"Most parts of the construction project will deal mainly with improving, expanding and connecting existing roads," he said. 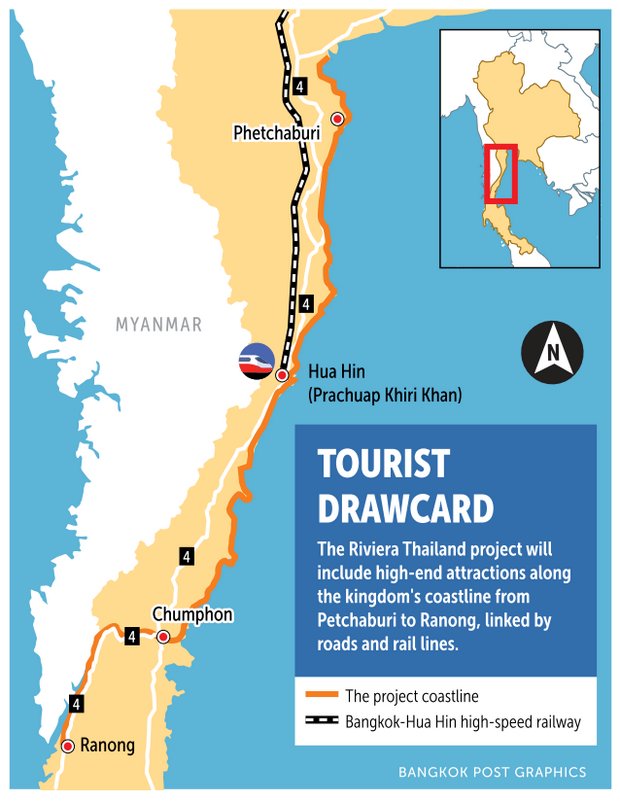 Vason Kittikul, vice-president of the Tourism Council of Thailand, welcomed the government's decision to push ahead with the project.

However, he said, to achieve the ultimate goal of becoming another Riviera, the government and all parties concerned would have to first connect Hua Hin with Cha-am in terms of both tourism capacity and quality.

"Community tourist attractions, enterprises and health-based tourism sites will have to be connected, for the sake of tourists' convenience," he said.

Numerous royal projects in Phetchaburi and Prachuap Khiri Khan as well as their local history, art and culture should also be included in this tourism development project.

And aside from developing land transport infrastructure for this project, the government should include offshore cruise ship moorings into the plan, he stressed.

More importantly, the government should aim to attract more foreign tourists starting with those from Scandinavian nations which now make up the majority of holiday makers in Hua Hin.