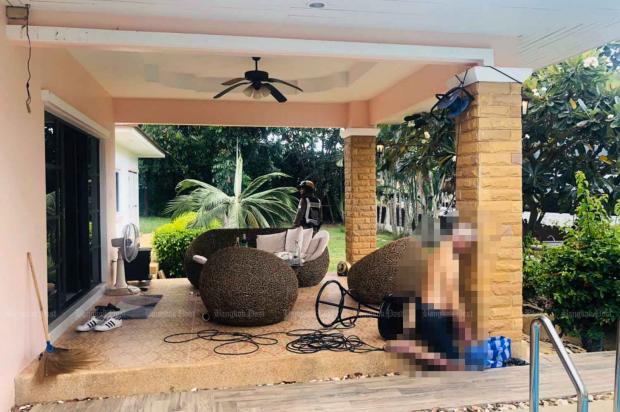 The body of a Norwegian man is found hanged on the porch of his rented house in Hua Hin district of Prachuap Khiri Khan province on Monday. (Photo by Chaiwat Satyaem)

A Norwegian man aged 47 was found hanged at his rented house in Hua Hin on Monday.

Police rushed to the Hua Hin Paradise Village housing estate after being informed of the death. They found the body of a man hanged with black electrical wire on the porch of the one-storey house.

At the scene there were chairs, three liquor bottles -- two of which were empty -- two empty beer cans, three glasses and two sets of dishes. There was also a toppled stool. Police also found a mobile phone at the bottom of the swimming pool.

The deceased was wearing jeans shorts and had a tattoo on his right arm. No wounds were visible on the body, except for some scratches on the knees apparently caused by scraping against the ground at the time of death.

A swimming pool engineer said he found the body when he arrived at the house for his regular pool maintenance visit. He said the man had rented the house for six months.

Police collected fingerprints and other evidence at the scene and had not ruled out any possible cause of the death, including suicide and murder. The body was moved to Hua Hin Hospital.

Click "play" to listen to Norwegian man found hanged in Hua Hin and "Download" to keep this file for educational purpose.

fingerprint : a mark that you leave on something when you touch it, showing the pattern of lines on the skin of your fingers - รอยนิ้วมือ

maintenance : the act of keeping something in good condition by checking or repairing it regularly - การซ่อมบำรุง

ruled out : stopped considering this as a possibility - ประกาศว่าเป็นสิ่งที่เป็นไปไม่ได้

scene : site; a place where something happens or happened - สถานที่เกิดเหตุ

stool (noun): a small seat that is usually, but not always, low to the ground - ม้านั่งไม่มีพนักซึ่งมี 3 หรือ 4 ขา, ม้านั่งเดี่ยว

wires (noun): metal in the form of thin threads - สายโลหะ