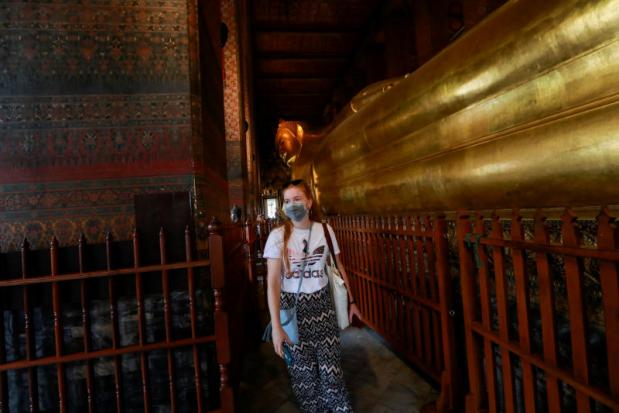 A tourist wears a protective mask on Monday at Wat Pho, a temple which is usually full of tourists, amid fears of coronavirus. (Reuters photo)

The Tourism Ministry will seek a reprieve for some 500,000 tourists who will end up overstaying their visa now that countries in Europe have started sealing their borders to deal with Covid-19.

"Most of the remaining tourists are long-stay elderly travellers from Germany, Italy and Russia who spend their winters here. They came to Thailand before the virus hit their hometowns and decided not to return home. They fear not receiving sufficient healthcare [upon returning home during such difficult circumstances]," said Tourism and Sports Minister Phiphat Ratchakitprakarn.

European countries have been closing their borders since this weekend and flights have been cancelled, making it impossible for tourists to fly back home, he said.

Mr Phiphat told the Bangkok Post that he is going to discuss the matter with the Interior Ministry and Immigration Bureau, as this problem comes under their jurisdiction.

He plans to seek a temporary reprieve for these tourists as well as visa extensions for those whose countries have been affected. He will also ask the authorities to not have overstayers blacklisted.

By law, tourists from most countries can get a tourist visa for 30 days and are fined 500 baht for every day they overstay. Serious offenders can face deportation or be blacklisted, which bans them from re-entering.

As for whether Thailand will impose strict measures to stop foreigners from entering the country, Mr Phiphat said Thailand will not shut borders.

Click "play" to listen to Tourism minister wants to help visa overstayers and "Download" to keep this file for educational purpose.

blacklist : a list of the names of people, companies, products or countries that an organization or a government considers unacceptable and that must be avoided - บัญชีดำ, รายชื่อผู้ที่รัฐบาลไม่ยอมรับหรือต้องถูกหลีกเลี่ยง

jurisdiction : the authority that an official organisation has to make legal decisions about somebody/something - เขตอำนาจตามกฎหมาย

overstayer (noun): a person who stays in a country for longer than they are allowed to stay, not leaving when their visa to stay in the country ends -