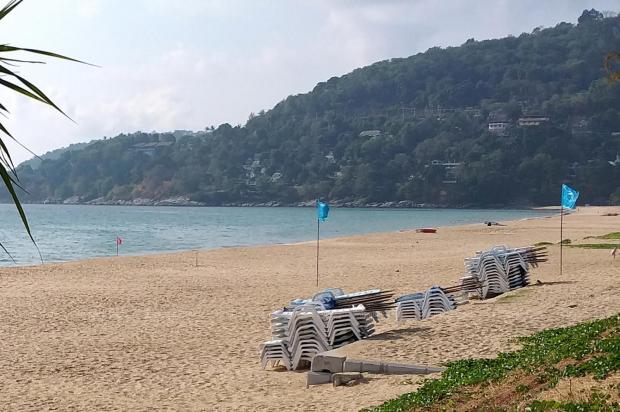 A sign at Patong beach, Phuket, notifying visitors of temporary closure during the Covid-19 outbreak earlier this year.  Photo by Achadtaya Chuenniran

When the deadly Covid virus was first reported in China early this year, nobody would have imagined the ongoing global effects.

Countries that rely on tourism have been badly hit. The UN World Tourism Organization revealed US$320 billion has been lost, with global destinations reporting 56% fewer international travellers in the first five months this year.

The US has lost $30 billion in tourism revenue, followed by Spain at $9.7 billion and France at $8.7 billion.

Thailand is struggling to find a balance between health security and economic survival.

The government is still unsure about how to open the borders to foreigners without triggering an outbreak following a second wave in neighbouring countries.


The Tourism Authority of Thailand (TAT) was assigned to work with the Public Health Ministry and the Centre for Covid-19 Situation Administration (CCSA) to find a middle ground acceptable to all parties to allow foreign tourists to arrive.

TAT governor Yuthasak Supasorn said the tourism plan for foreign arrivals should be finished by September and will be used in every province in the country, not only Phuket.

"We are not calling the pilot plan the 'Phuket Model' anymore as we don't want to make the community there feel like this is an experiment," said Mr Yuthasak. "Every province that is ready to welcome international tourists will follow this scheme."

After the government wanted to let tourists stay in a sealed location among a few hotels in Phuket last month, it drew lots of criticism from the local community and caused a number of booking cancellations from Thai guests.


If the first and second batches of foreign tourists do not lead to an outbreak, the country can increase the number of guests per day based on the capacity of the health care system at some destinations, allowing more provinces to take part.

This is the government's plan for the fourth quarter, as it hopes international travellers will fill empty streets, restaurants and hotel rooms across the country next year, with the TAT hoping for 20.5 million foreign arrivals in 2021.

Phuket hoteliers have lagged behind those in Bangkok and Hua Hin, with only 22.5% average occupancy from January to August. Only 10% of hotels in Phuket have reopened.


Anthony Lark, president of the Phuket Hotels Association, said hotel operators acknowledge how difficult it is for the government to decide whom to allow in and when.

"As an island we have worked so hard and sacrificed so much to create a relatively Covid-19-free province since June, and we must protect this status," said Mr Lark.

He said many guests wrote to the association indicating they would prefer to quarantine in a pool villa or next to the beach rather than in a city hotel with no beach or gardens.


The alternative state quarantine (ASQ) system includes extensive measures designed to protect staff from infection, and those who deal with quarantine guests would most likely stay in the hotel and be subject to testing. Government officials claim the system has proven successful in Bangkok.

After two weeks pass and at least three tests return negative, tourists should be clear of any risk of infection and they can travel elsewhere in Thailand.

experiment : a test of products, substances, new ideas, methods, etc. to find out what effect they have - การทดลอง

sacrifice : to give up important or valuable things, so that you or other people can have or do something else - เสียสละเพื่อส่วนรวม

sealed (adj): (of a container, room, etc.) closed tightly, especially so that air, liquid, etc. cannot get in or out - ปิด