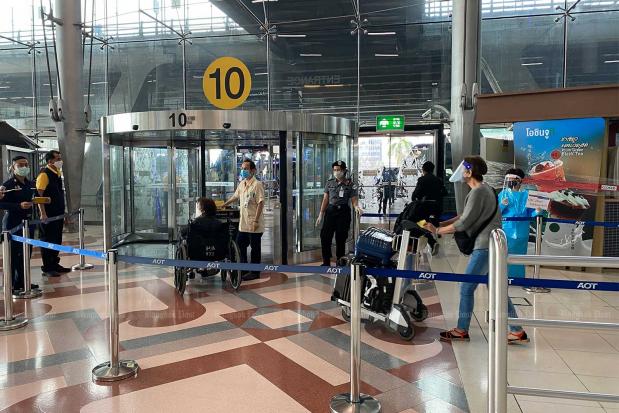 A total of 506 returnees from five countries arrive at Suvarnabhumi airport on Wednesday. Twenty-one of them had a high temperatures and were taken to state quarantine facilities. (Photo: Sutthiwit Chayutworakan)

Twenty-one people returning from abroad were found to have a high temperature on arrival at Suvarnabhumi airport on Wednesday and were admitted to hospitals, and four new virus cases have been found.

The 21 were among 506 returnees from Qatar, Taiwan, China, Bangladesh and Japan, and arrived on five flights.

One flight from Taiwan landed with 223 returnees, of which six had a high fever. They were immediately taken to hospitals. The remaining returnees were taken to state quarantine facilities.

One flight from Tokyo landed with 232 returnees, including one who was wanted on an arrest warrant.  Fifteen of the returnees had a high fever and were taken to hospitals.

Taweesilp Visanuyothin, spokesman of the Centre for Covid-19 Situation Administration, said two of the four new virus patients had returned from the UAE. One is a 33-year-old male worker and the other a 25-year-old masseuse.

They arrived on July 2 and were quarantined in Chon Buri province. They tested positive for Covid-19 on Monday, but showed no symptoms.

The third new case is a male student, 27, who arrived from Egypt on July 8. He had been in close contact with a Covid-19 patient in Egypt and was quarantined in Chon Buri. He tested positive last Saturday, but showed no symptoms.

The fourth is a woman aged 51 who returned from the US last Saturday and was quarantined in Bangkok.

Of the total 3,236 cases, 3,095 had recovered including three who were released on Wednesday. Eighty-three patients remained at hospitals. The death toll remained unchanged at 58.

Click "play" to listen to Thursday: 21 returnees have fever; 4 new virus cases and "Download" to keep this file for educational purpose.