Range of 100g or less will be tax-free

Automakers have been lukewarm to the government's endorsement of the new automobile tax structure, saying the three-year adjustment period is too short. 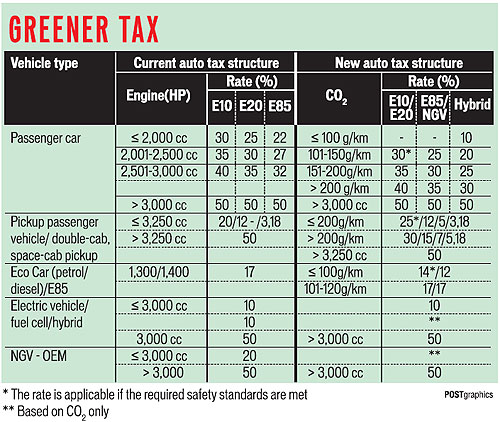 The new tax structure, approved in principle by the Democrat-led government, was approved by the government yesterday.

Most automakers agreed in principle with the reforms, which base tax calculations on carbon-dioxide emissions rather than engine size as in the current structure.

However, they said they need at least five years to prepare and adjust themselves to the new taxes.

The government, on the other hand, believes three years are enough.

Automakers also said if they could not adjust their technology and production plans in time, prices of some vehicle models, especially pick-up trucks might be increased.

Piengjai Kaewsuwan, president of the Thai Automotive Industry Association, said the three-year period is too short for automakers to adjust their production plans.

Pick-up trucks, in particular, are likely to be hit the hardest because their product cycles are longer than those of passenger cars. "We have repeatedly told related government agencies that three years are not enough for automakers to adjust," said Ms Piengjai, also vice-president for government affairs at Nissan Motor (Thailand).

"Models which were launched recently will require additional investments to make them eligible for the new tax structure. This will add to their financial burden," she added.

While the new tax structure based on carbon-dioxide emissions is a global trend, it might be too complex, she added.

Government agencies have yet to show automakers how to calculate the taxes. "As well, we do not know whether the emission levels set by the Excise Department are suitable for Thailand or not," she noted.

Surapong Paisitpattanapong, spokesman of the Federation of Thai Industries (FTI)'s Automotive Industry Club, said the adjustment period is the only concern of automakers.

"The adjustment period of less than five years is too short," Mr Surapong said.

Until now, the excise tax rates were based on engine size on the assumption that larger engines use more fuel.

With new technologies, the theory is no longer true. Some large engines are more fuel-efficient than smaller ones.

Under the new tax regime, a normal eco-car will be charged 17%.

One-ton pickups will be taxed at 3% and the rate would rise to 5% if emissions exceed 200 grammes per kilometre.