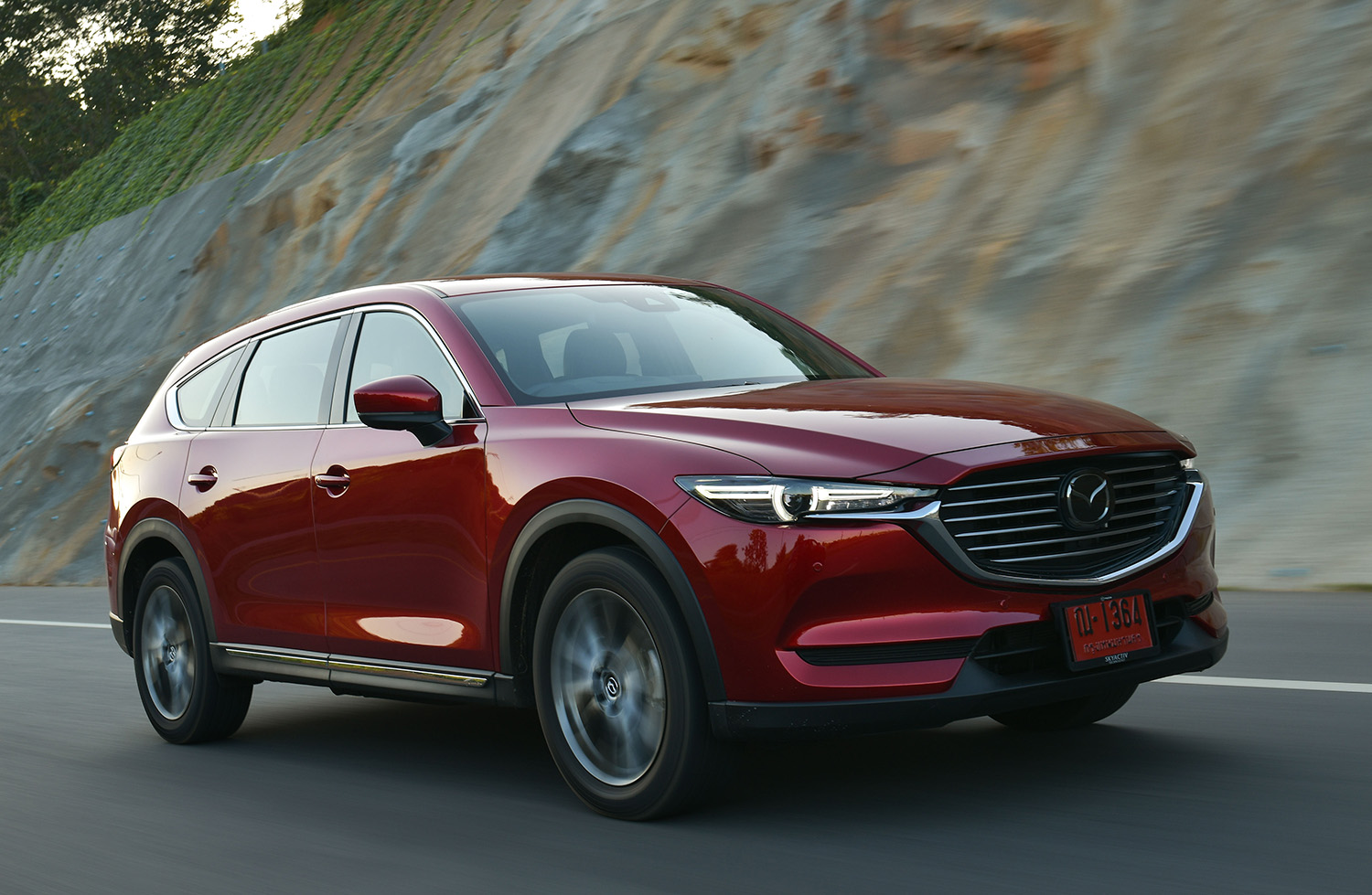 After getting behind the wheel of the Mazda CX-8 in diesel form late last year, it’s now time to try out the petrol version.

The petrol-powered CX-8 has a 2.5-litre four-cylinder motor producing 194hp which shouldn’t be confused with the 231hp turbocharged version found in the smaller CX-5.

One thing Mazda Sales Thailand hasn’t granted the petrol variant is the diesel’s 2+2+2 seating matrix featuring two large chairs in the second row; only the more conventional 2+3+2 variation is available in the petrol version.

Apparently, the Thai Mazda office has chosen to sell the 2.5 as a price-led model of the CX-8. Are there any pitfalls with the lack of turbo performance? 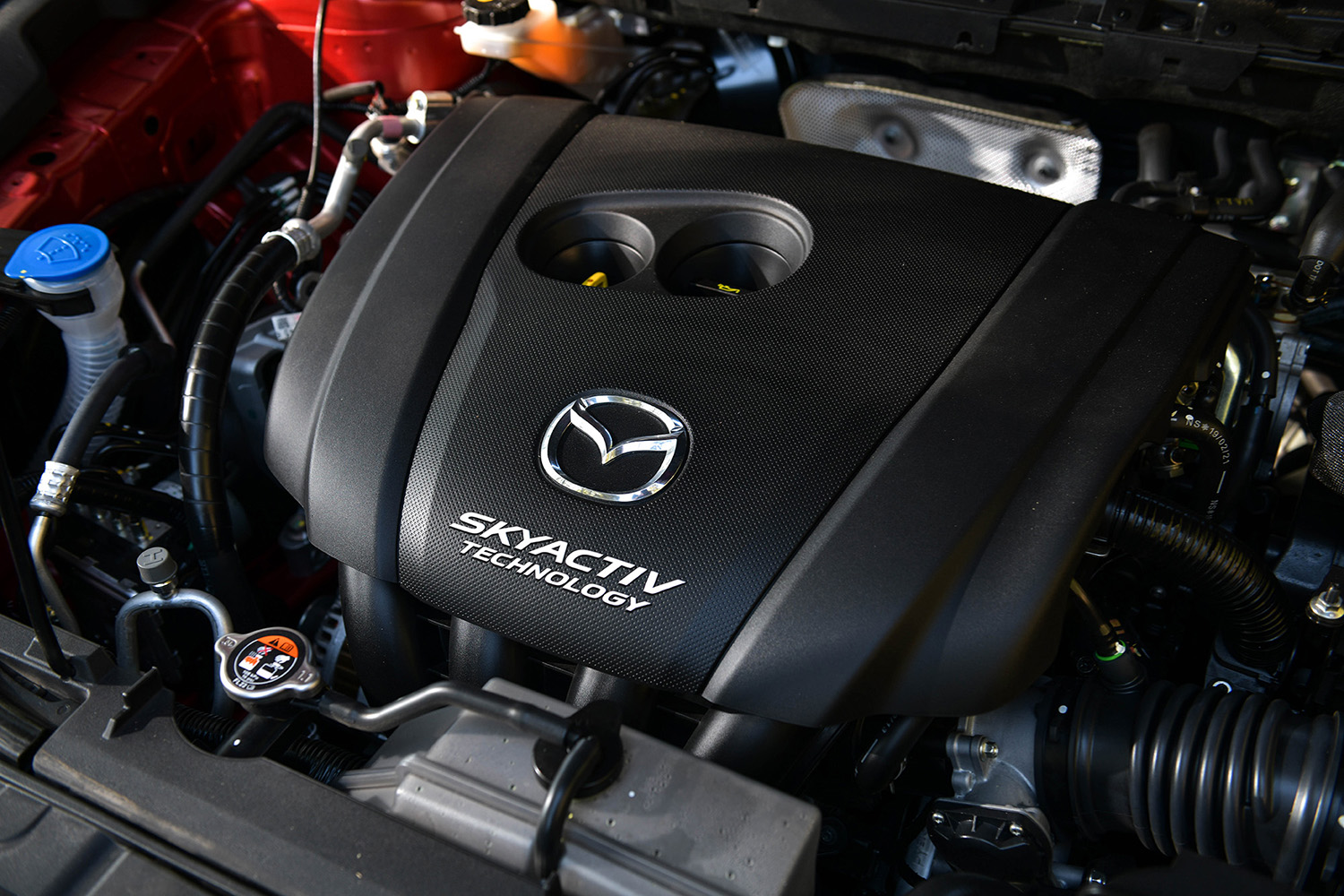 While it’s very clear that no turbo means less usable power, on paper at least, it isn’t really the case when driving the CX-8 in the real world.

With nearly 200hp available on tap, the 2.5 still manages to feel lively at most times and is free-revving to the engine’s redline. And despite an unfancied six-speed automatic, gear-shifting is smooth with hardly any power lost in transition between the cogs.

Like in the diesel, this petrol CX-8 has driving characteristics geared for comfort. A good thing, you could say, given that Mazda has high hopes of converting punters of similarly priced pickup-based SUVs, mostly coming with a jiggly ride.

The rest of the petrol CX-8 is very much the same like in its diesel counterpart: a reasonably spacious seven-seater with all kinds of convenience items. And despite a slightly aging dashboard design, it still works easy and well enough. 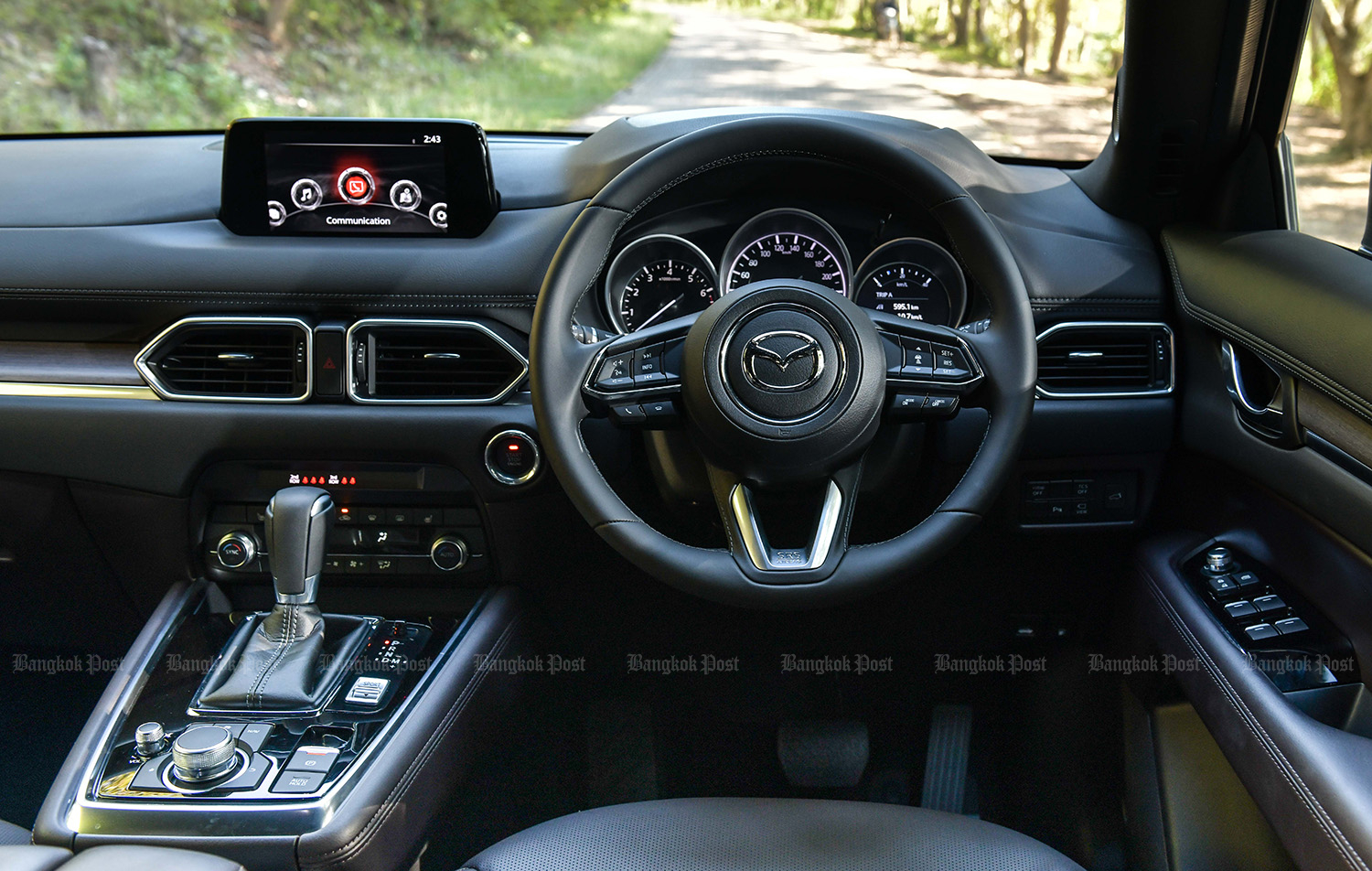 Despite yielding sufficient levels of performance, the 2.5 petrol engine simply lacks the punch (and refinement) of the 2.2 diesel under load and on more demanding road conditions.

Then there’s the issue of fuel economy (see graph for details) which is probably why Mazda has decided to not offer all-wheel drive capability in the petrol model. But being just front-wheel drive takes away some driving confidence on loose road surfaces. 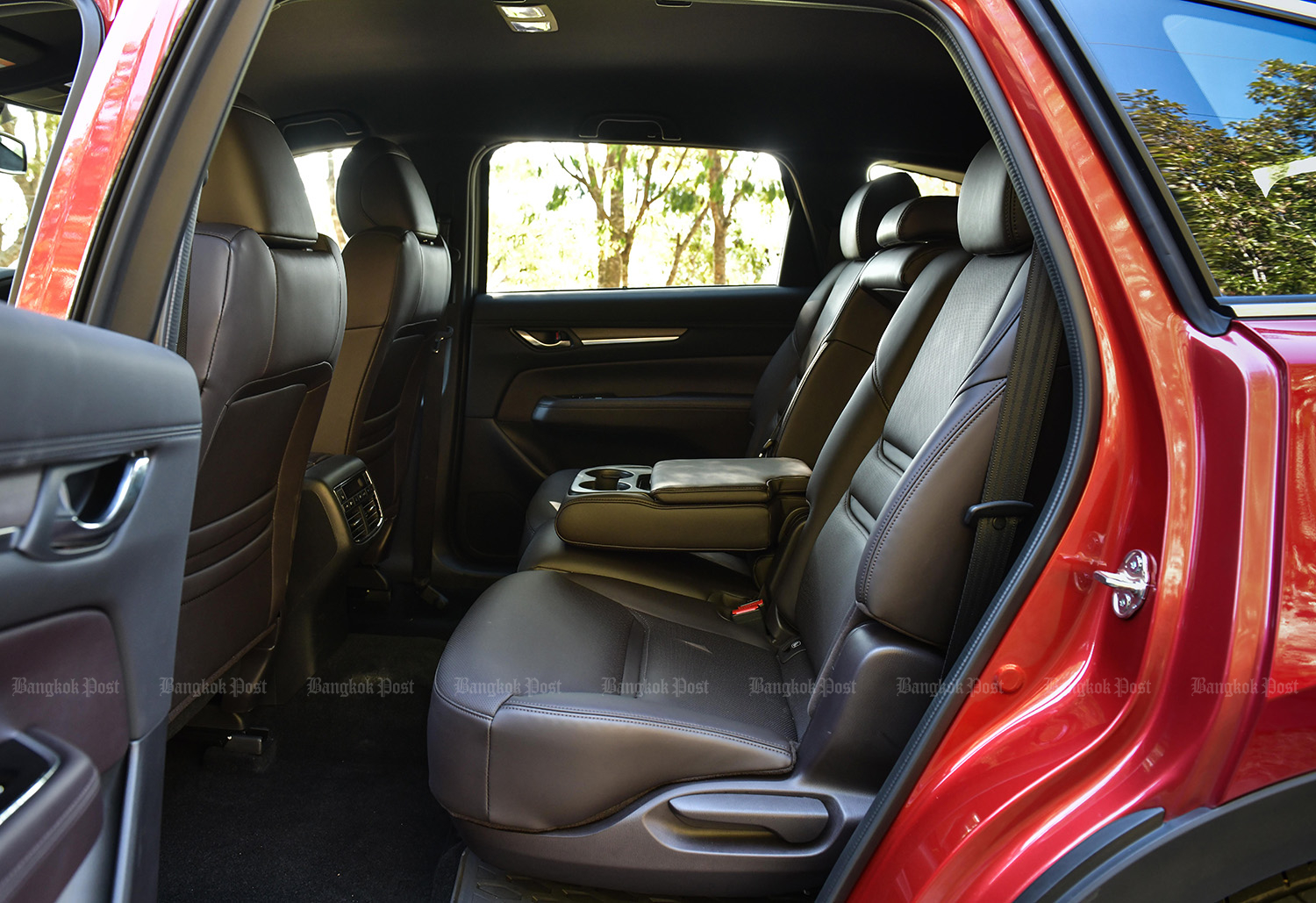 Mazda may have its reasons for not offering the CX-8 with the latest 2.5-litre petrol-turbo. But it’s quite confusing as to why it doesn’t, since the smaller CX-5 gets it (and doesn’t feature the non-turbo unit at all). It may look like a good way to get rid of old tech at lowered prices (the CX-5 2.5 Turbo sells for 1.85 million baht, dearer than the CX-8 2.5).

But the truth is that the naturally aspirated 2.5 still does a sufficient job in the CX-8 if you don’t have high hopes for performance. In fact, we somehow feel that the CX-5 Turbo is a little bit of excessive given its non-performance concept.

Which is to say that the CX-8 in petrol form isn’t that bad if you really need to make some financial savings in the showroom. But the diesel is still the more natural choice as a holiday-making SUV. 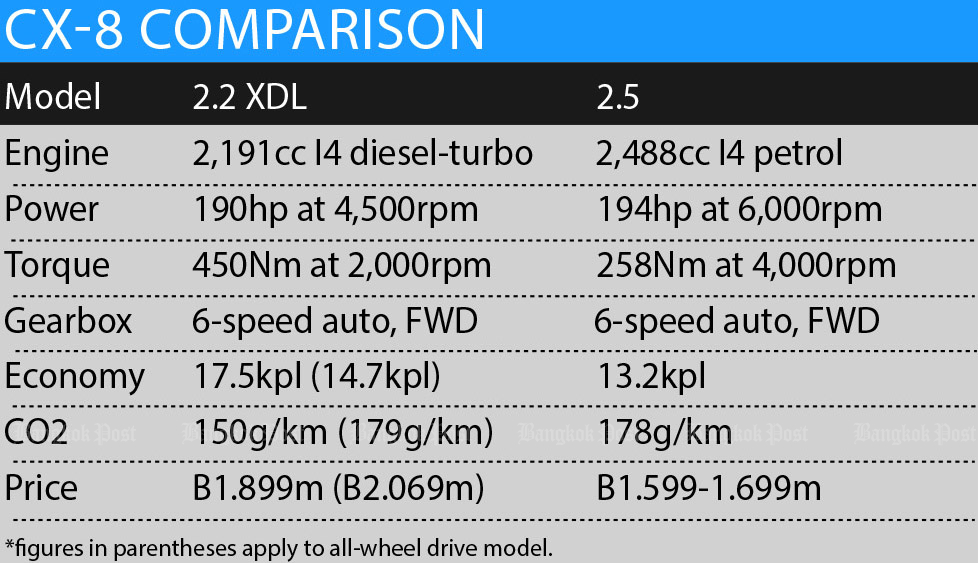 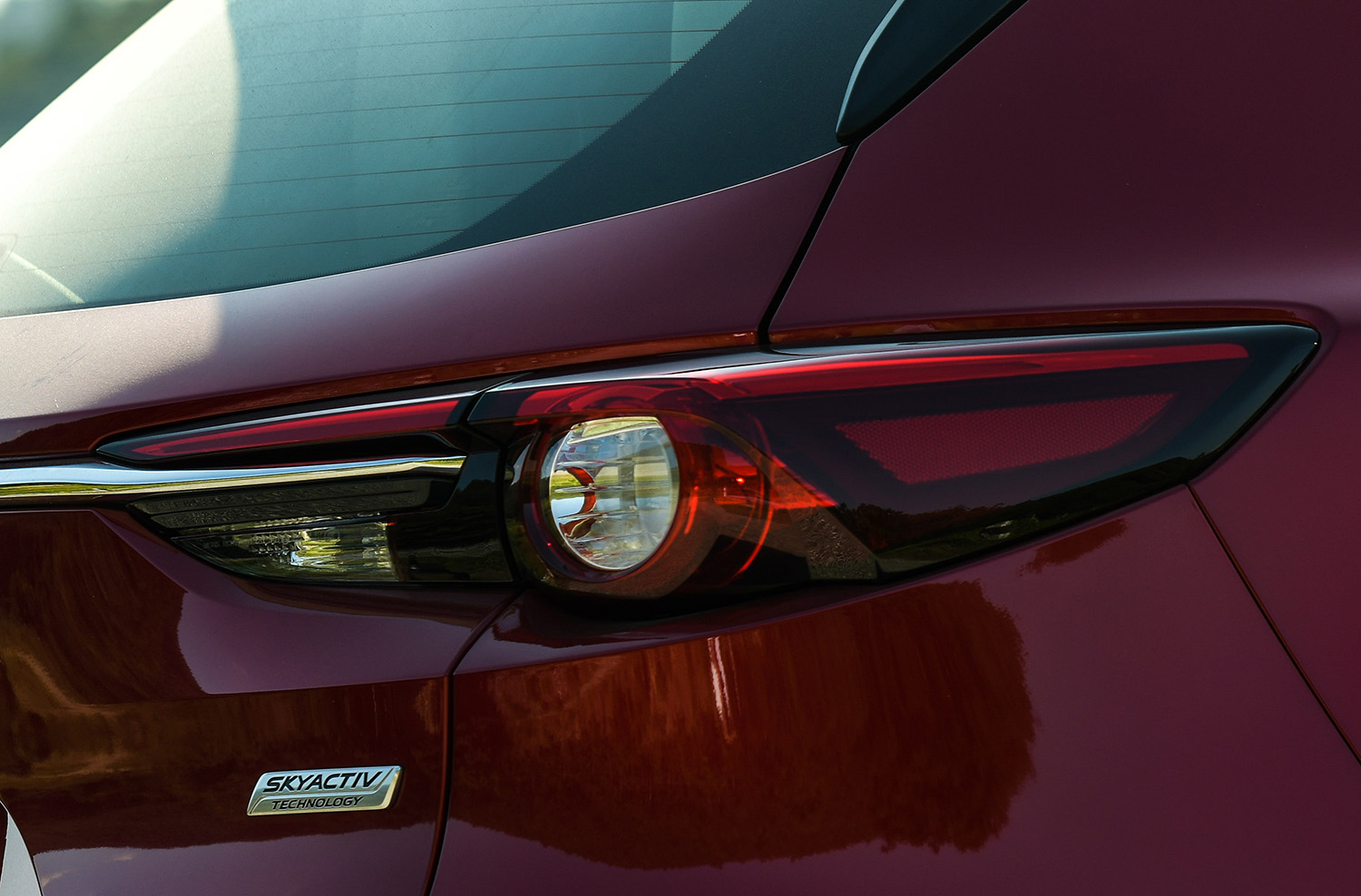