The new Almera isn’t a class-act but a worthy successor to the previous model. 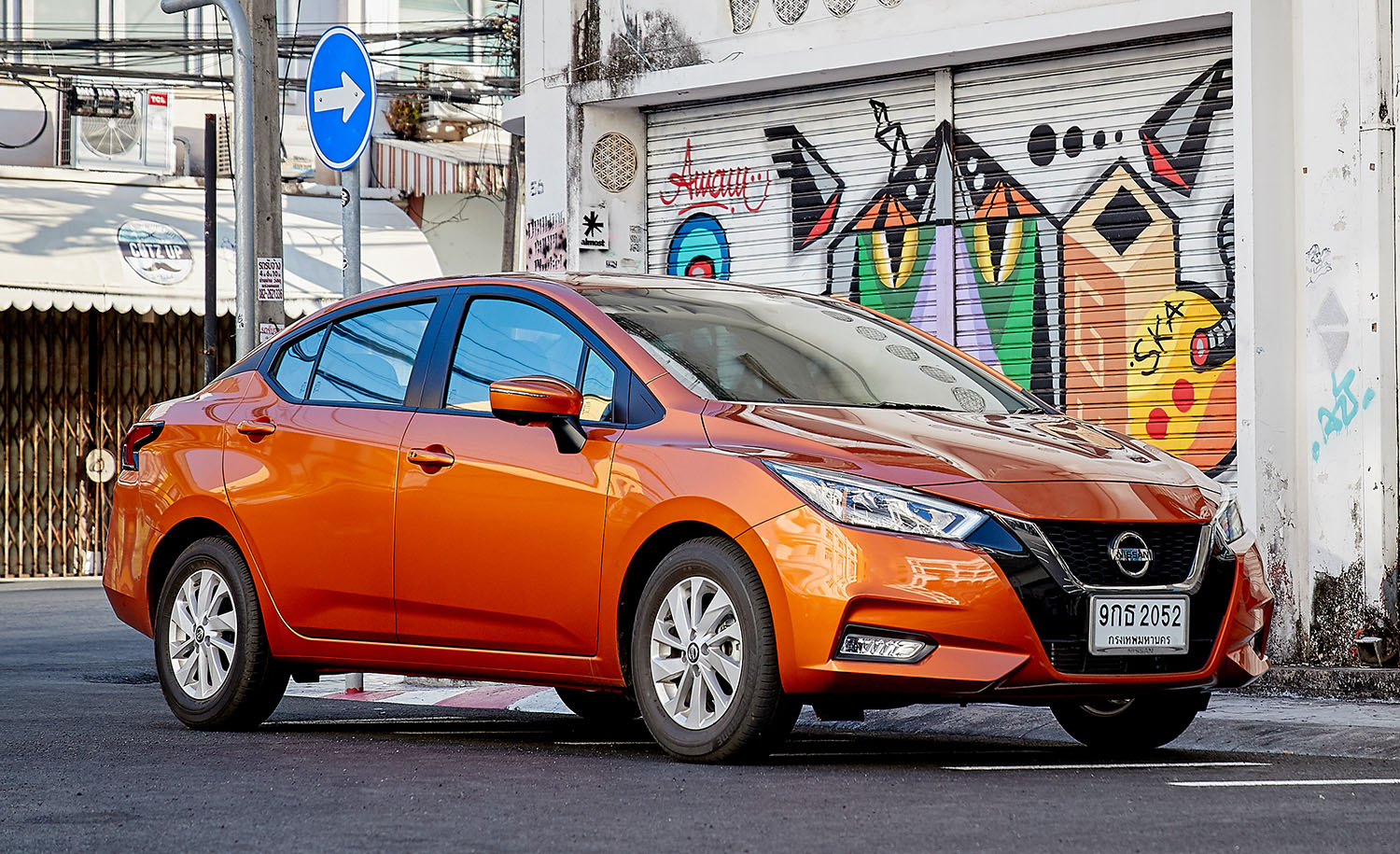 Many people merely need a car rather than wanting to drive one. So they’d just either go for a roomy and comfy package or one with nice financial offers. Better, they might wish for both factors.

It appears that the former aspect is why the Nissan Almera has been quite a popular budget sedan in Thailand.

Like its intended rivals in the B-segment, the Almera has also been built to Ecocar rules for competitive prices as possible. 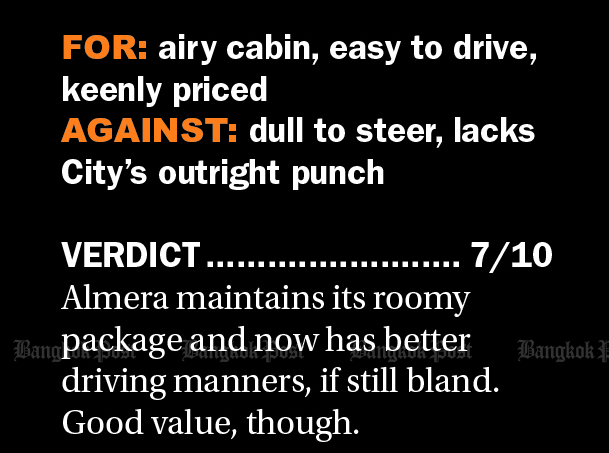 In fact, many Thai buyers prioritise cabin space when buying cars in the mass-market scene. The Almera stood out with a class-leading wheelbase length for enhanced leg room which made it feel exaggerated and limo-like.

That remains for the all-new model which has just been launched in Thailand late last year and driven here on Thai roads for the first time. It needs to be a selling point like before because some rivals like the Suzuki Ciaz are just as capable in this particular facet.

Despite the arrival of the new-generation City sedan from Honda, the latest Almera still manages to stand out with an airy cabin. Lots of window space and low seat positions help for that. Couple that with cushy chairs (there’s no leather option, even in top-spec VL trim), the Almera is nice to sit in.

Like before, leg room in the rear is more generous than head space. Up front and especially behind the wheel, though, it’s practically faultless where the driving position adjusts to a wide scope. 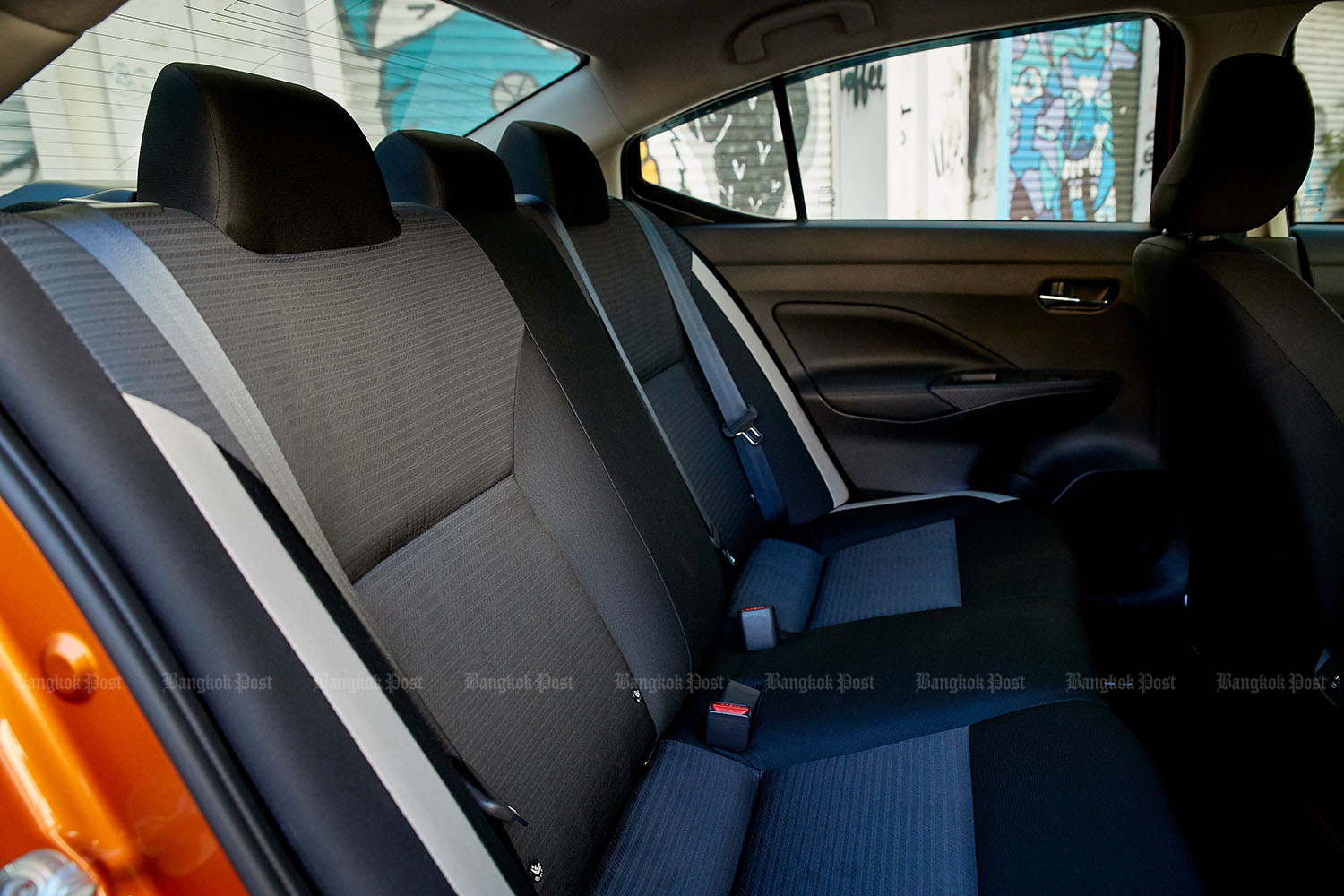 Like the exterior, which now has more stylish design cues and balanced proportions, the interior is penned with modernity. The centre of focus on the dashboard is the easy-to-use infotainment screen.

Accompanying it is a semi-digital instrument panel which still sees an old-fashioned analogue speedometer. Nissan should have simply made it an all-electronic affair.

Other than that, the Almera’s cabin sates for being functional yet offering sufficient aesthetics. The soft-touch material on the dash is a welcome dose for perceived quality, but whether it needs to contrast other areas with white colour is open to debate.

Like in the City, the Almera has ample levels of boot space but features no foldable rear backrests to increase it. Nissan has also been apparently cost-effective with the rear seats where no adjustable head restraints are available.

But the price and kit balance is quite OK for cars in this class. Prices for the Almera kick out at just under half-a-million baht and top out at a reasonable 650k for the VL, featuring six airbags and several driver-assist technologies not readily available in its competition.

It still remains to be seen which B-segment sedan in Thailand will be next to follow the Toyota Yaris Ativ in featuring cabin-filled airbags made as standard across the range. 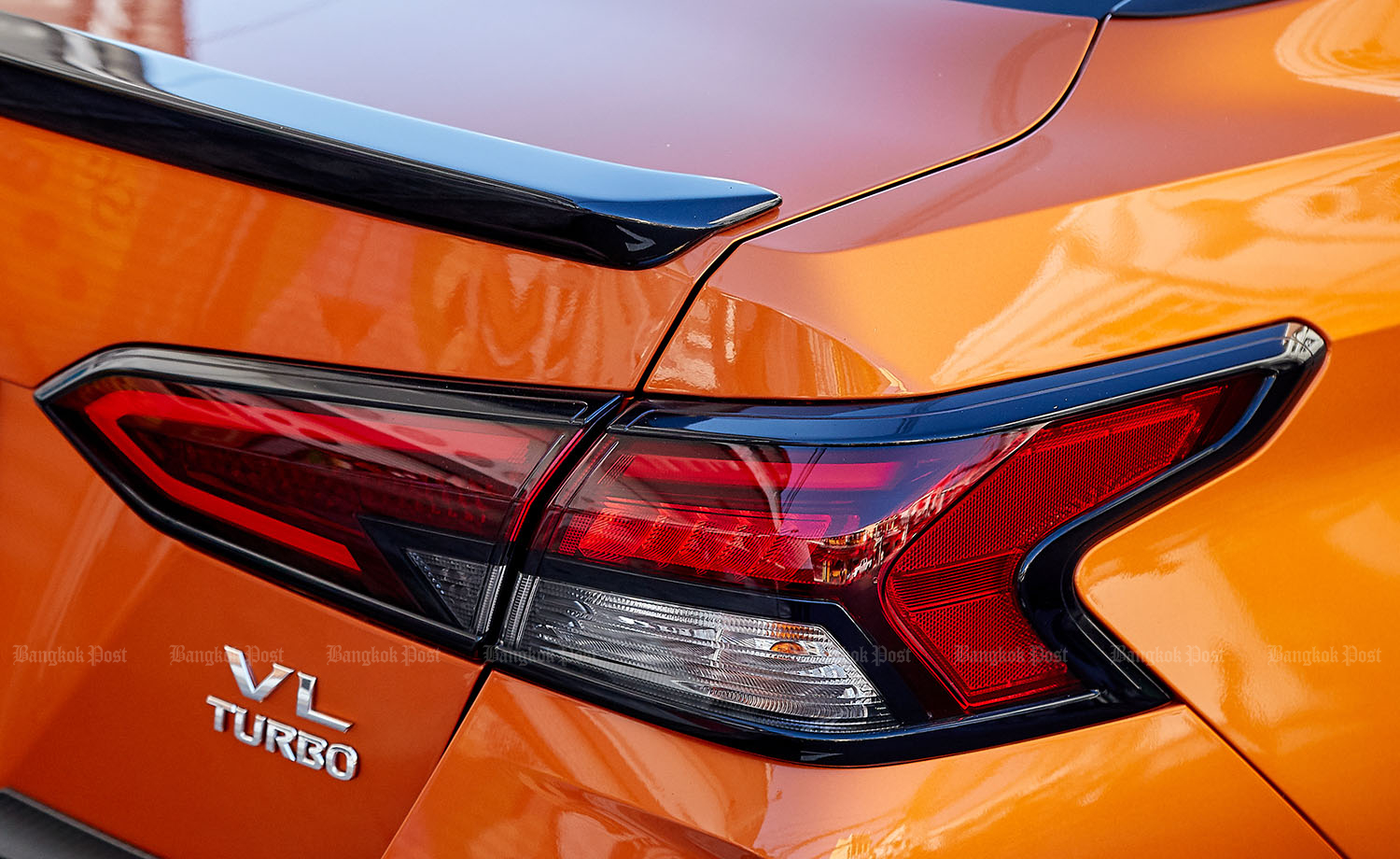 While the previous Almera was a shoddy car to drive, thanks to its long, narrow body and breathless 79hp 1.2-litre petrol motor, this successor puts up a better show now.

Unlike before, you don’t necessarily feel manoeuvring an excessively long car. It appears that Nissan has done a decent job in concealing the Almera’s lenthy mass on the move around town. The steering, despite being so lifeless in feel, is light and should suit most buyers.

Complementing this is a ride quality that’s compliant at all times on most road surfaces in this country. The City also has a similarly comfort-oriented chassis which is a natural setup for cars in this class. Anybody looking for spirited handling will still need to focus on the Mazda 2. 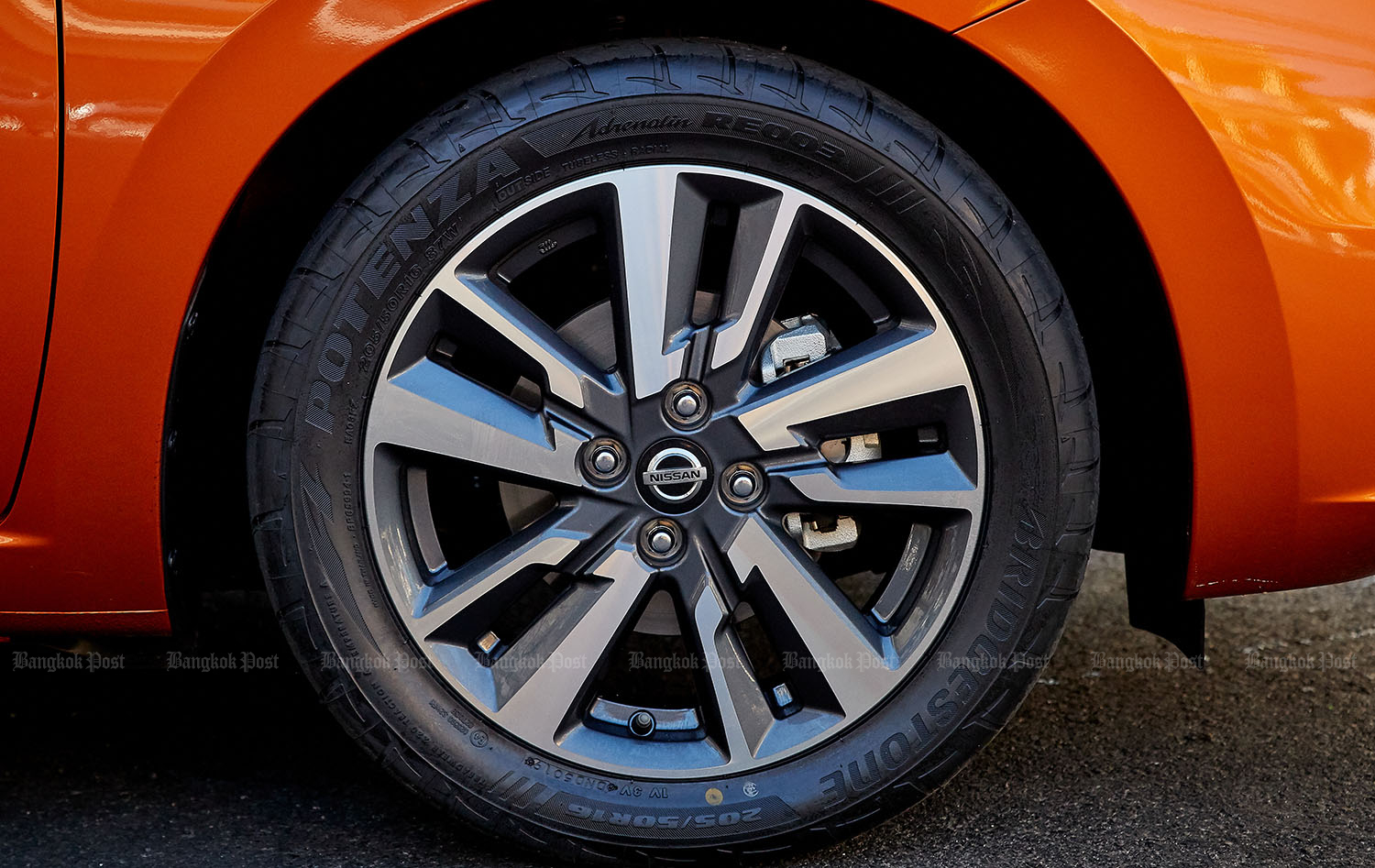 The newest models of the Almera and City are still the only ones in their class to go turbo, a type of forced induction system that has long been in play with cars in Europe to improve both performance and fuel economy (parallel with lowered CO2 emissions) at the same time.

This is another area that’s vastly improved in the Almera. The newfound presence of the turbocharger makes power so much more tractable at real-world speeds, although some lag is evident at low engine speeds. Keep on driving it and you’d just wish the rest of the competition followed suit with such tech.

But when you put the 122hp City into retrospect, the 100hp Almera is behind. The on-paper stats are revealing enough in the real world: the City clearly offers better mid-range punch and top-end rush for more convincing shove at higher speeds outside the city. 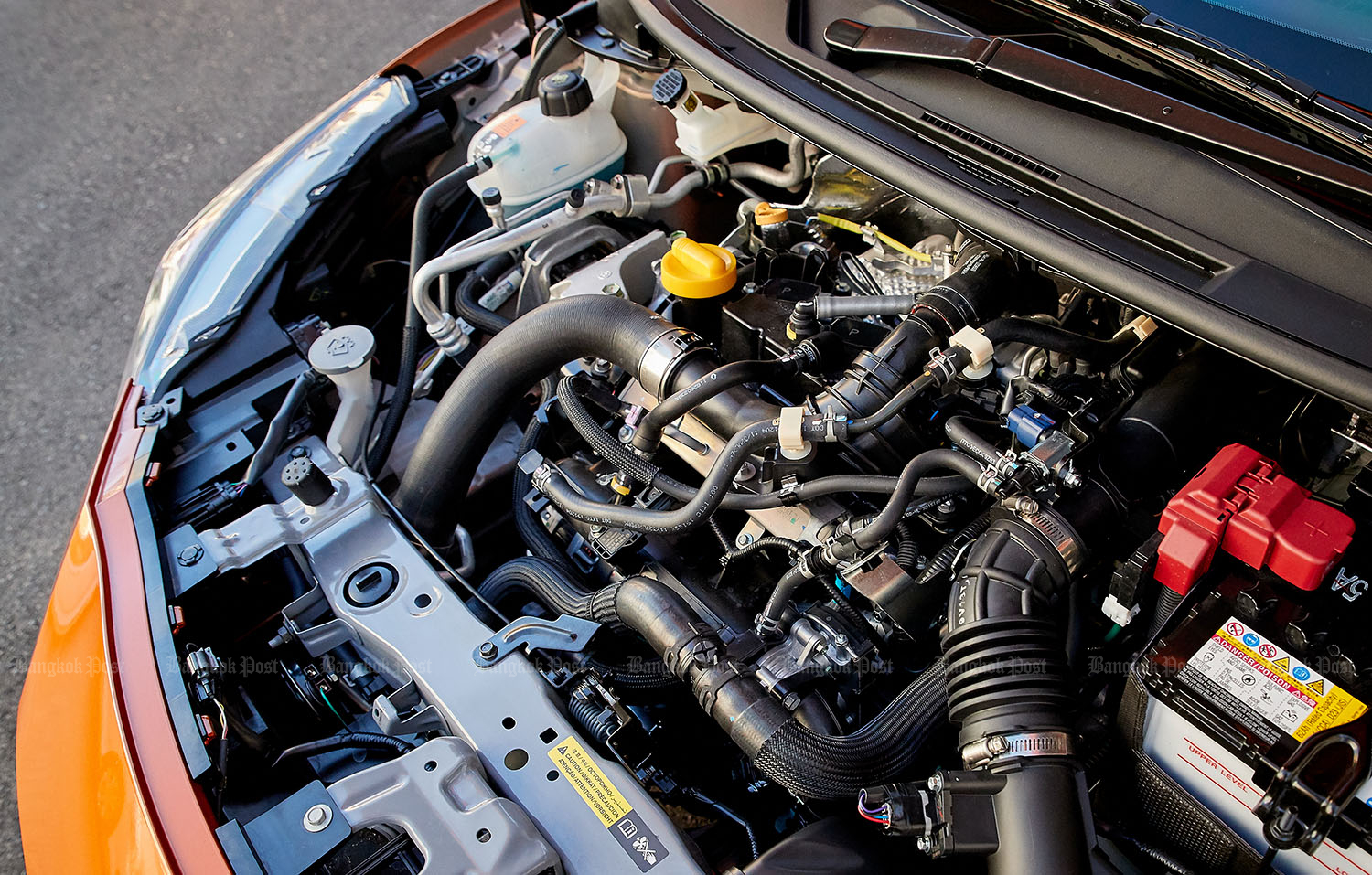 It feels very one-dimensional in the Almera, where the focus is merely on an effortless drive around town. There’s no Sport button of whatever type to increase response of the engine or CVT transmission. What the Almera also lacks in the City is refinement – there’s excessive engine vibration of the three-pot motor at idle speed.

But if you’ve never driven the latest City or aren’t too keen on performance, the Almera still manages to feel sufficient in its own right. Owners of the older Almera will immediately cherish the turbo of the new model.

Despite not being able to lead the class in terms of driving performance (which the City does now for the moment), the Almera still appeals with its keen prices, comfy cabin and generally easy driving manners. For many buyers of such kind of a car, that probably matters more. 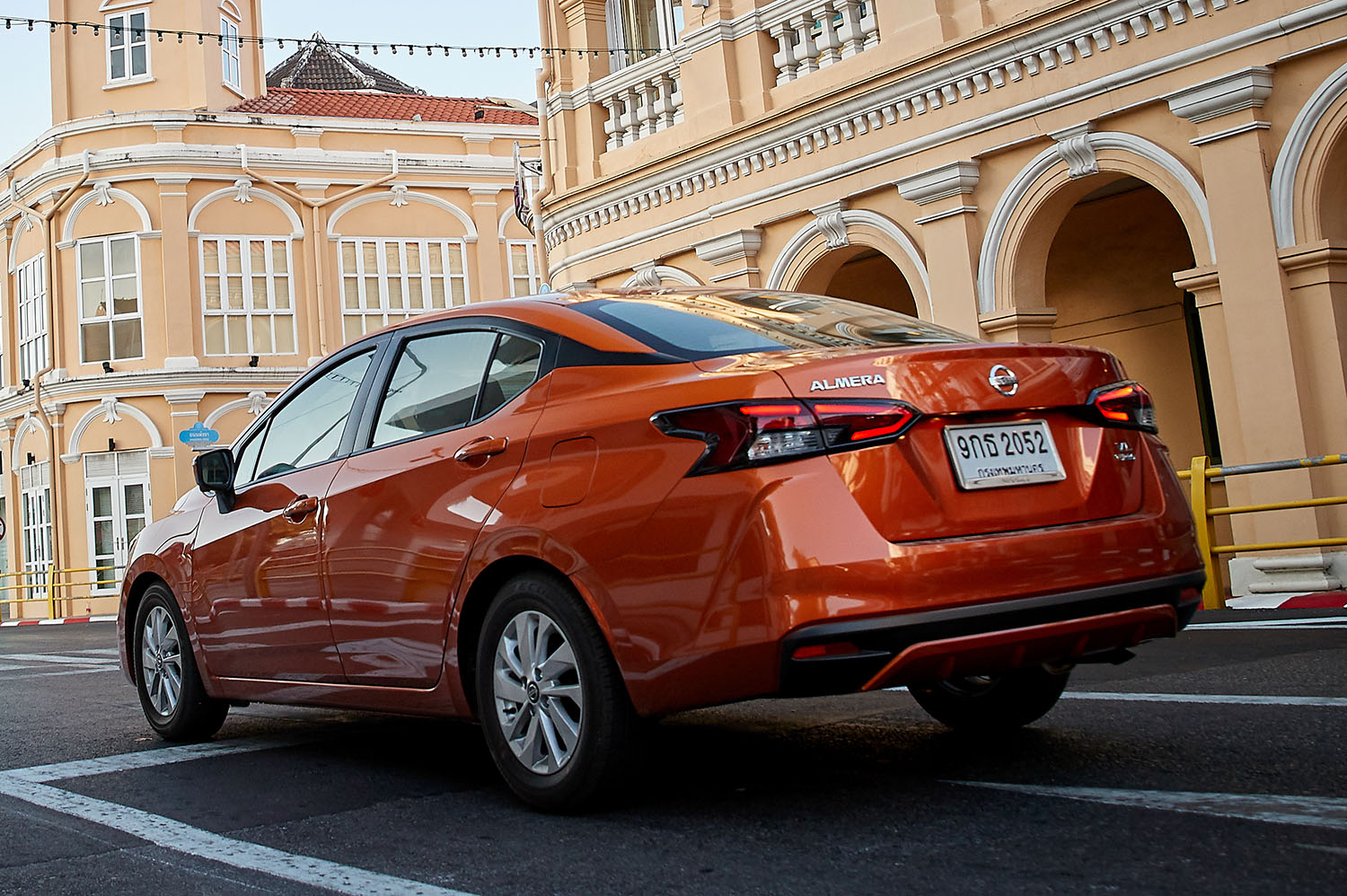 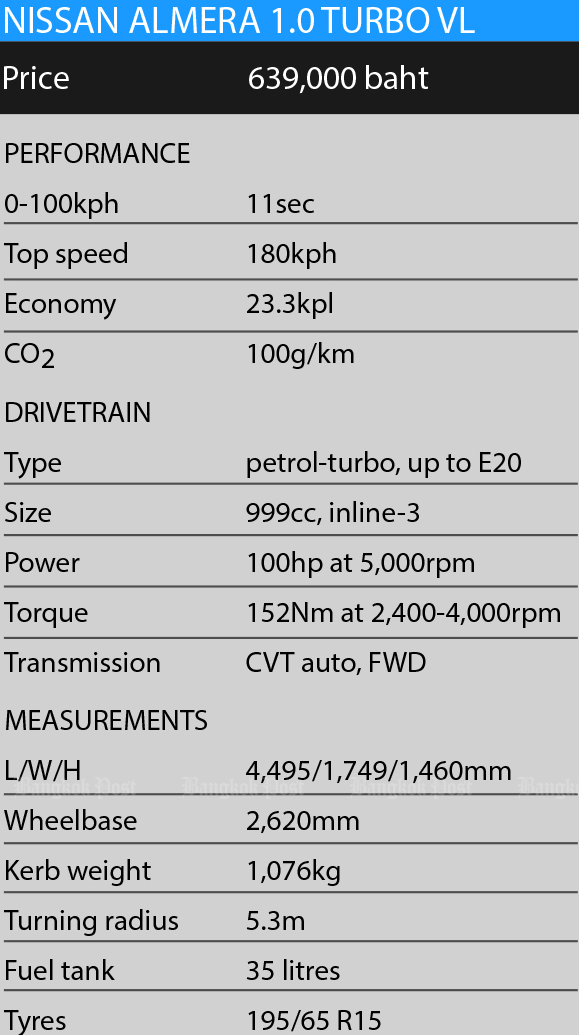 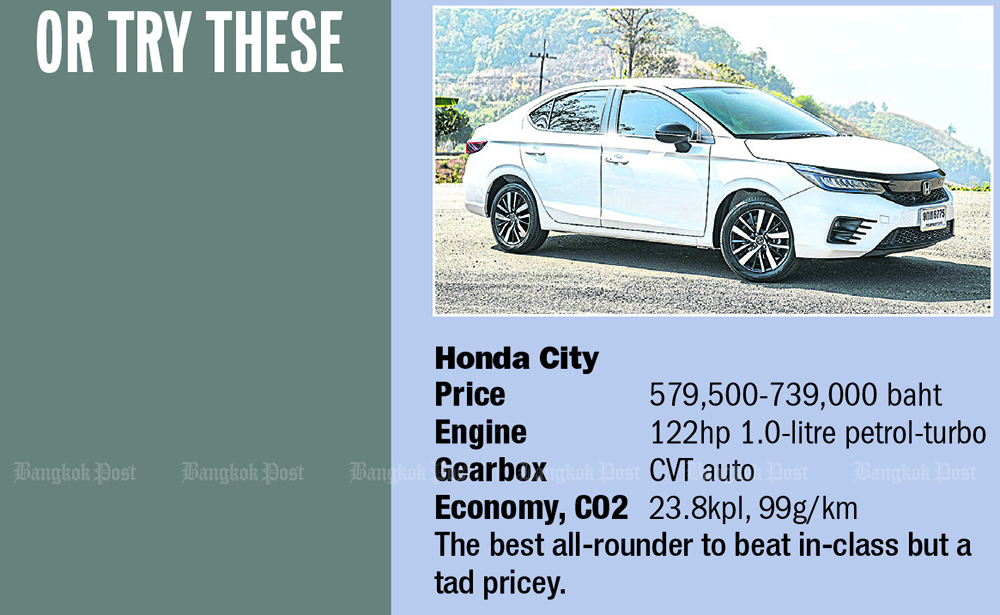 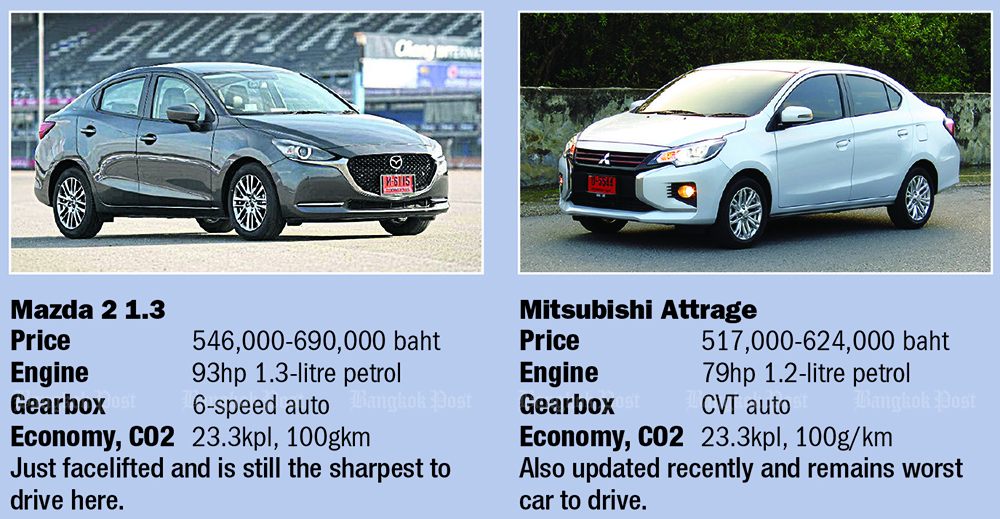 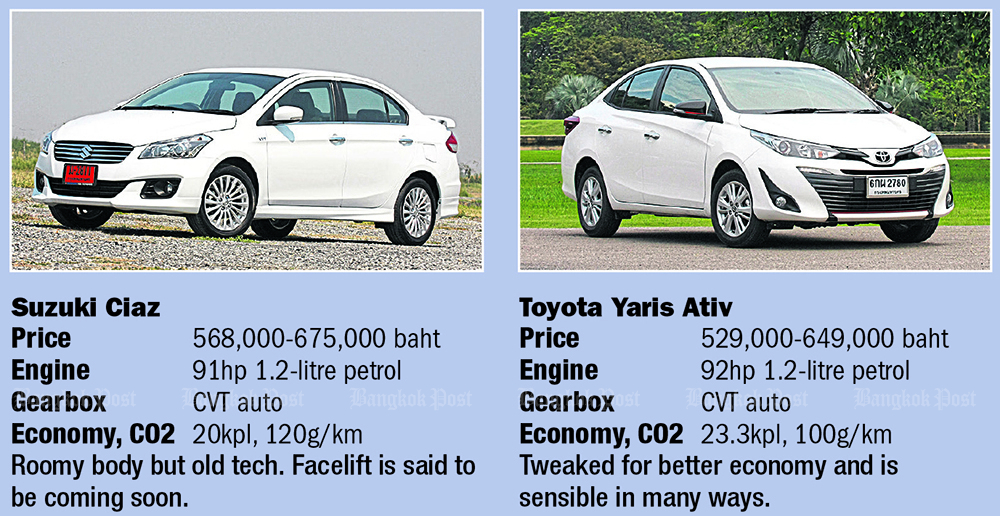