Audi’s regular Q3 ought to be the one, but there are things to like about its sportier derv. 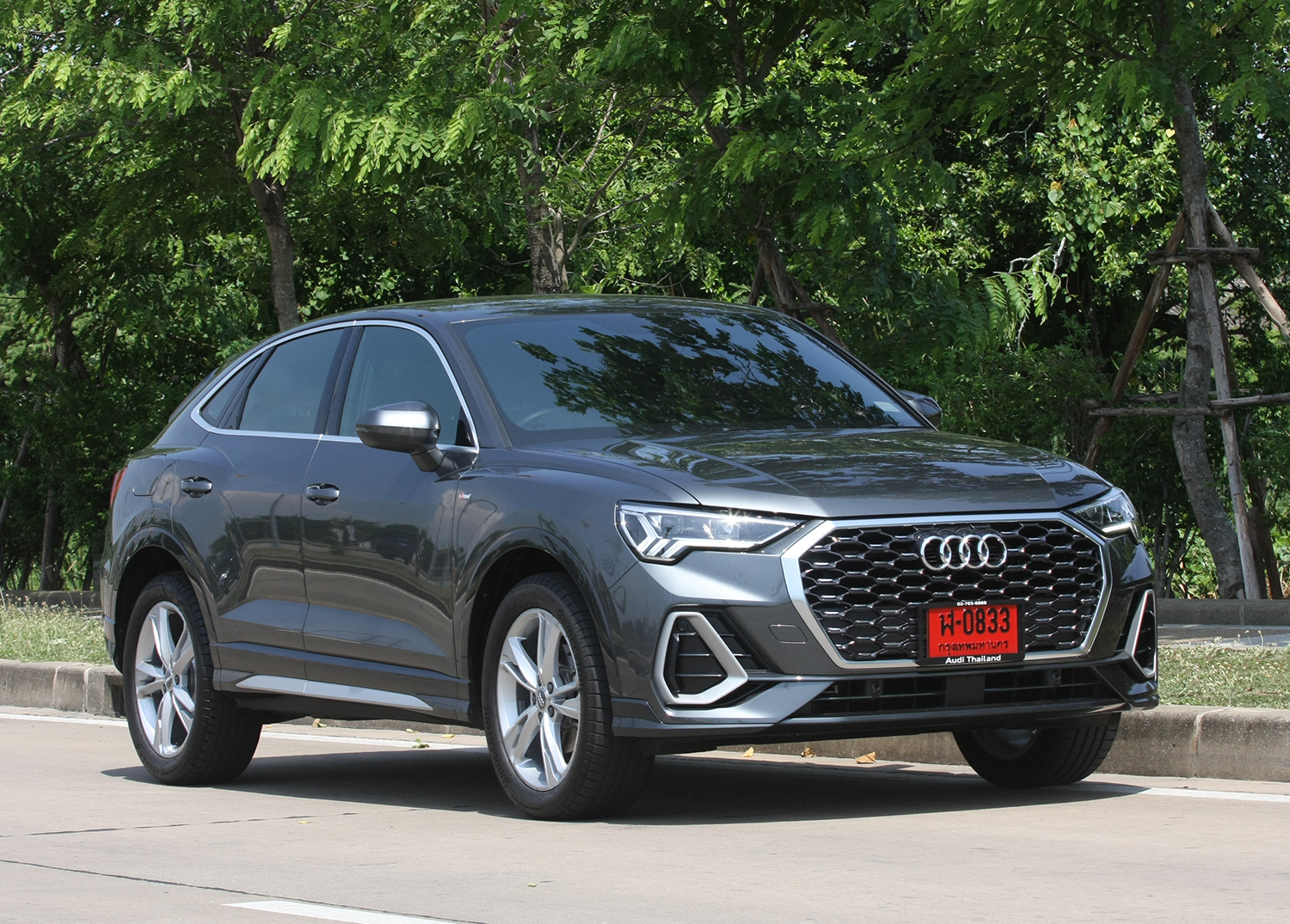 When the coupe-like SUV took the streets for the first time in the early noughties, there was some sense of despair among driving enthusiasts and rational minds alike.

They wondered why a relatively big vehicle is unnecessarily taking up so much road space and whether its large footprint is really doing any marvels to its handling. Worse, its appearance mostly feels decapacitated just to look like a sporty car.

But that didn’t stop people from buying them. Fast forward two decades, all of Germany’s finest carmakers are offering a string of them in showrooms luring buyers who like everything from small to outlandish. 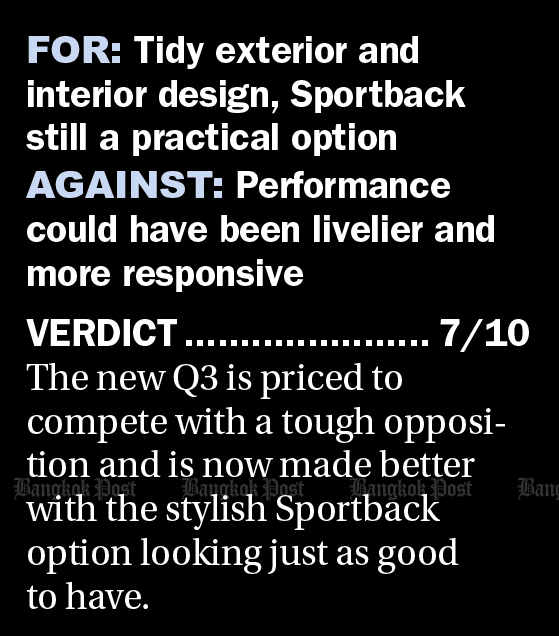 It begins to make sense, though, in the strictest sense of car marketing. You see, when SUVs started to take over sedans in terms of popularity, there were some buyers who wanting something a little different and fun.

Many car buyers these days end up driving alone on a daily basis most of the time, so losing some levels of practicality for the sake of exterior design is OK. That’s why the BMW X6 has such a raked roofline when compared to its X5 sibling.

And because SUVs are generally tuned for comfort to satisfy a family, those seeking to break away from tradition might want a beefy drive for some driving fun. After all, we’re talking about sporty SUVs.

This formula is not only used by BMW but Audi, Mercedes-Benz and Porsche, as well. It will only be a matter of time when other premium brands like Lexus and Volvo follow suit before all mass-market nameplates complete the assault. 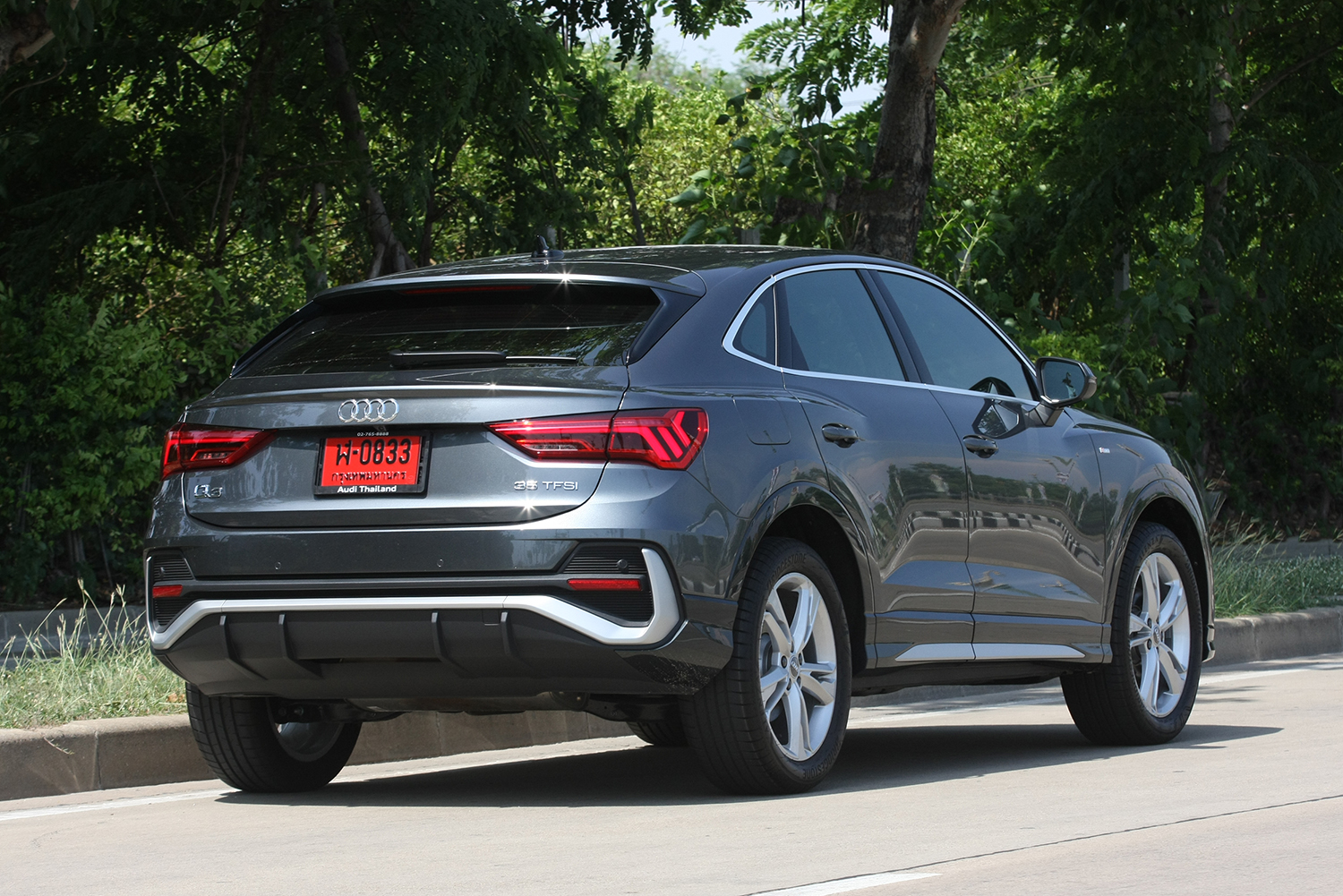 Which is why some carmakers are wasting no time in cashing in with this particular trend. Audi, for one, has simultaneously launched the all-new Q3 in both regular and Sportback forms in Thailand.

For those who aren’t that familiar with the Q3, it’s Audi’s answer to the BMW X1, with the Q3 Sportback going up against the X2.

People at the Thai Audi office said the Q3 Sportback received more enthusiasm than expected despite it commanding a circa-200k price premium over the normal model.

That’s unsurprising given the trend for sporty SUVs. As well, Thai punters deflecting from BMWs and Mercedes are highly likely to be bored with convention. 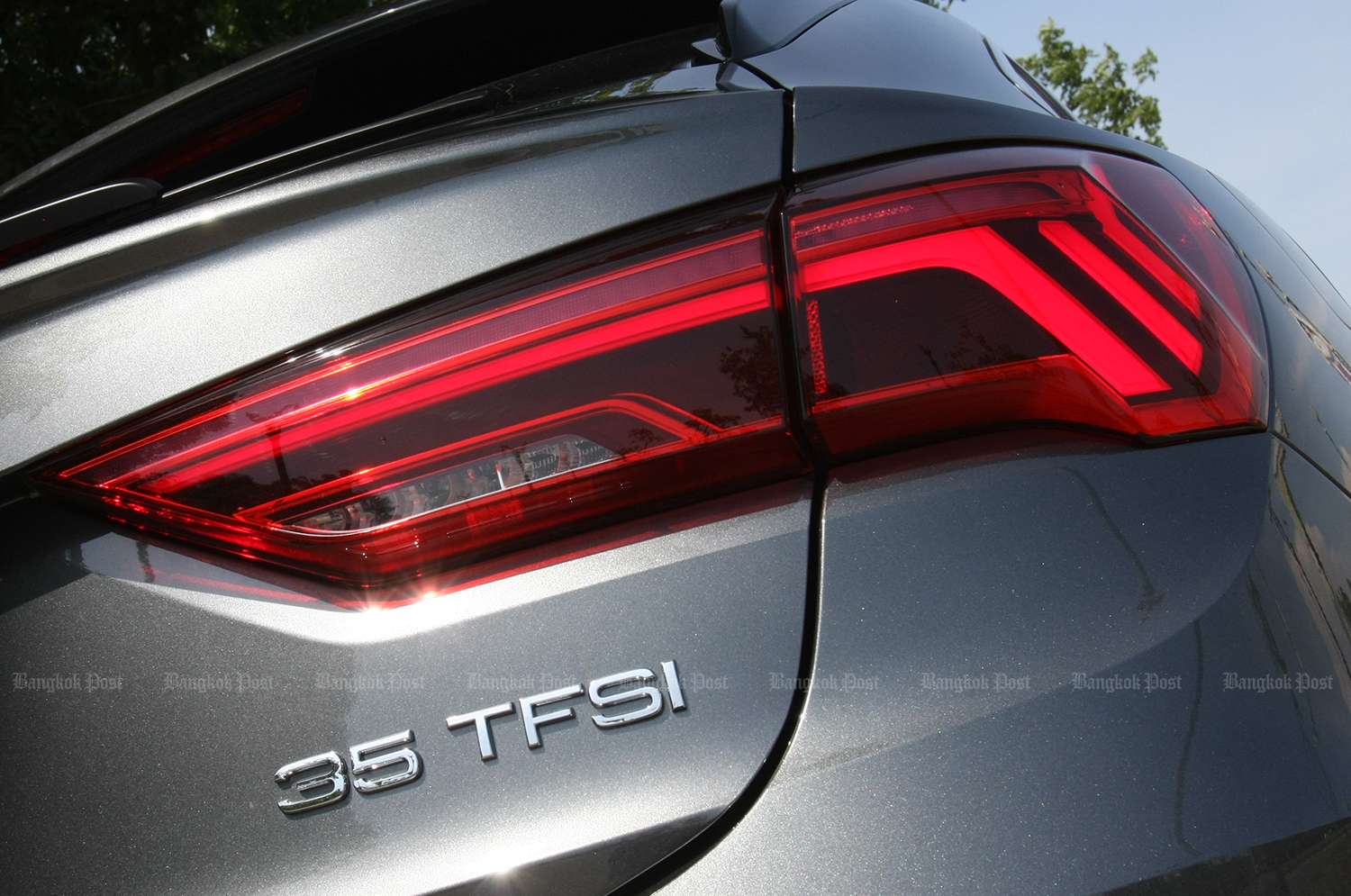 In the eyes of this writer, the Q3 Sportback looks significantly more appealing than the regular model thanks to the sloping roof and window lines.

In fact, the upright stance of the normal Q3 (and its first-gen predecessor which didn’t have a Sportback variant) makes it look a touch bland even when compared to its numerous traditional rivals.

Because exterior styling erodes into interior usability of sporty SUVs, buyers are usually prepared for this sacrifice and probably won’t take out a tape to measure what’s lost inside. If it looks alright from the eye, things should suffice then. 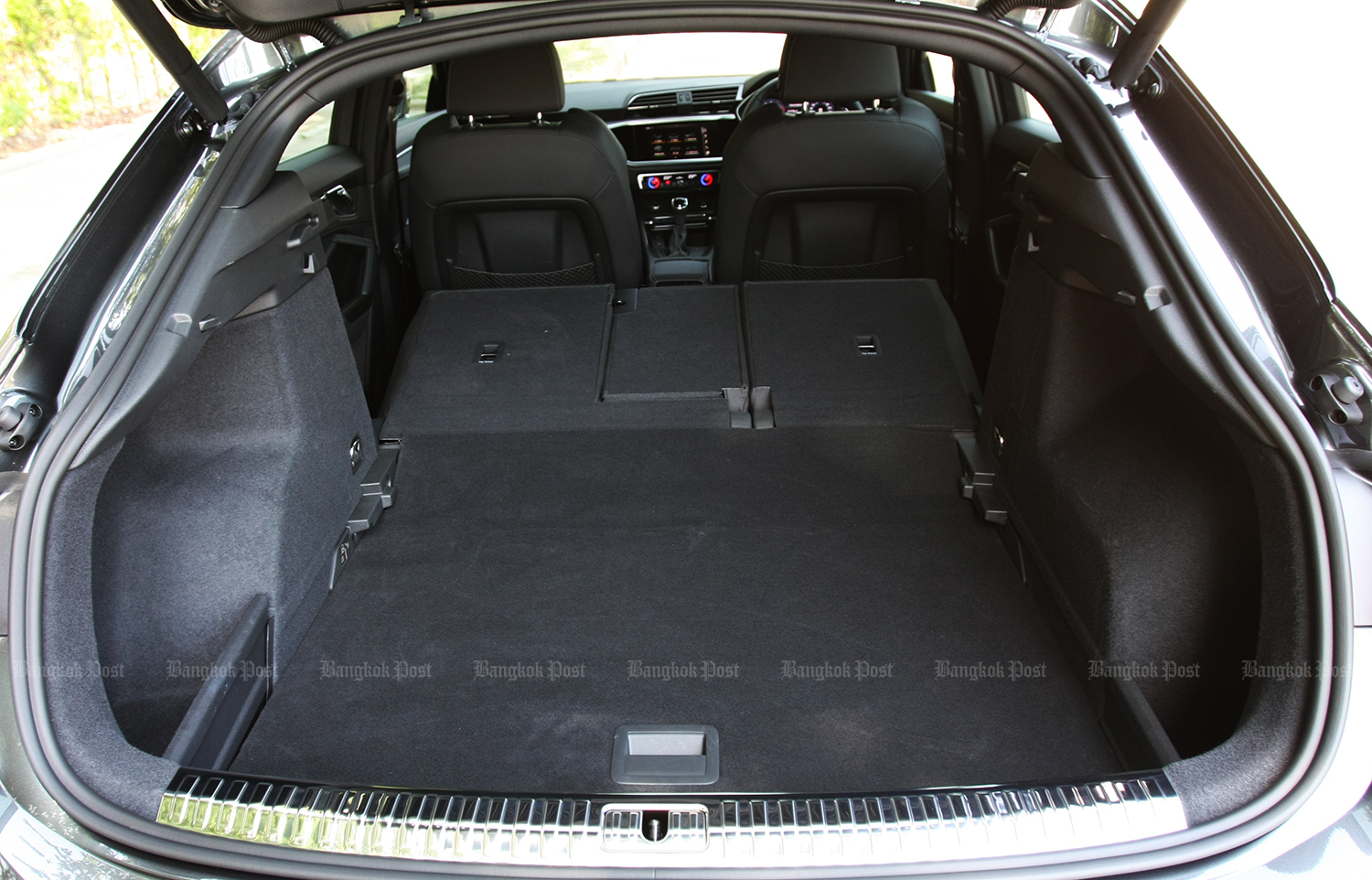 Aside that slanting tailgate, the Q3 Sportback’s boot looks sufficiently wide, deep and flat enough when the rear seats fold down. As well, there are some usable cubbie holes here and there.

What’s definitely not acceptable these days with sporty SUVs is limited head room for tall persons. In the Q3 Sportback, it’s just about right and possibly feels airier than in an X2. 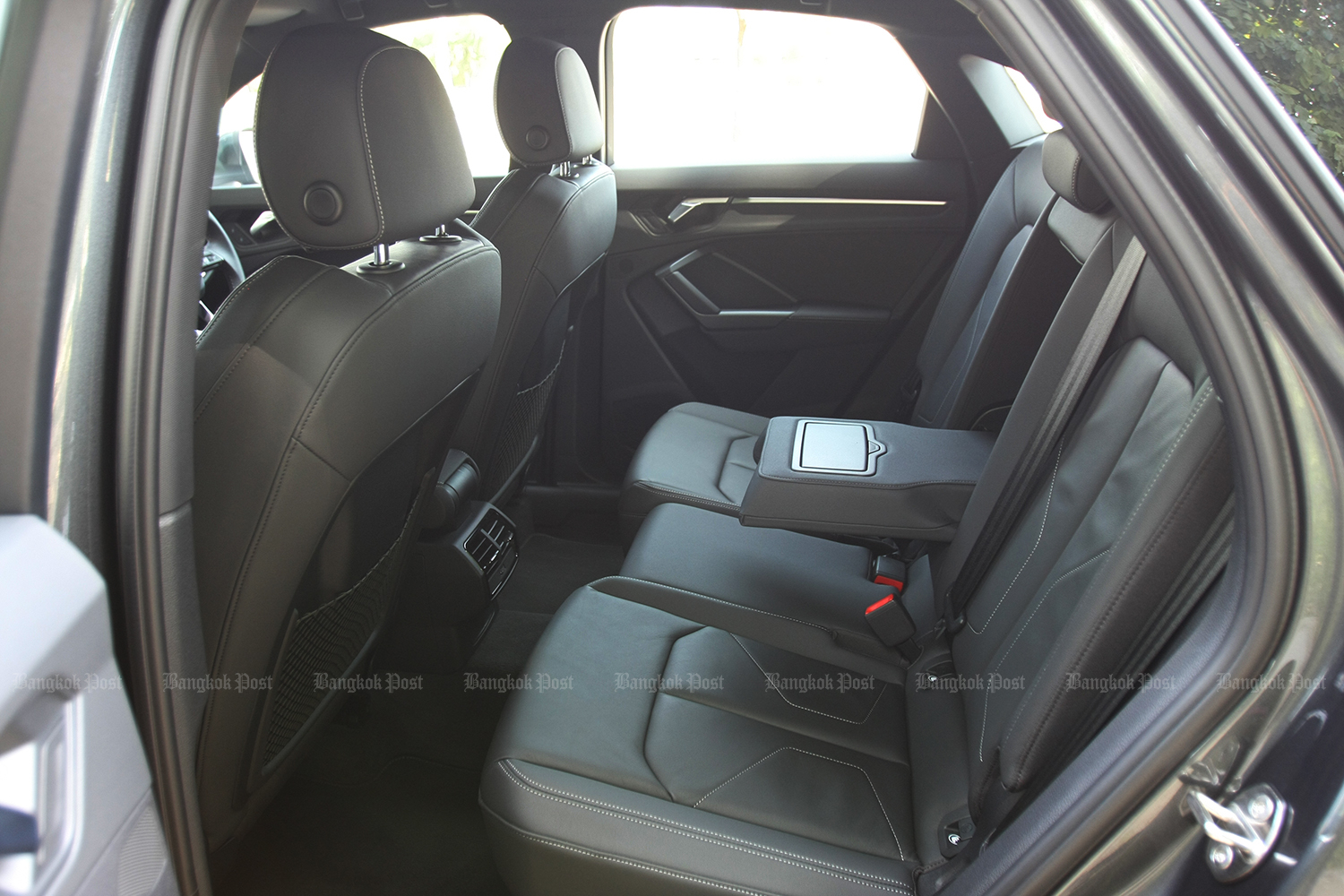 Because the two Q3s aren’t high-end SUVs from Audi, they don’t get the latest in interior electronics. Even so, it’s still a nice place to be in, the Q3 Sportback in particular, when compared to its competition.

In fact, the balance between modern operations and conventional functions seems just about right and isn’t tech overkill like in some of Audi’s larger models. 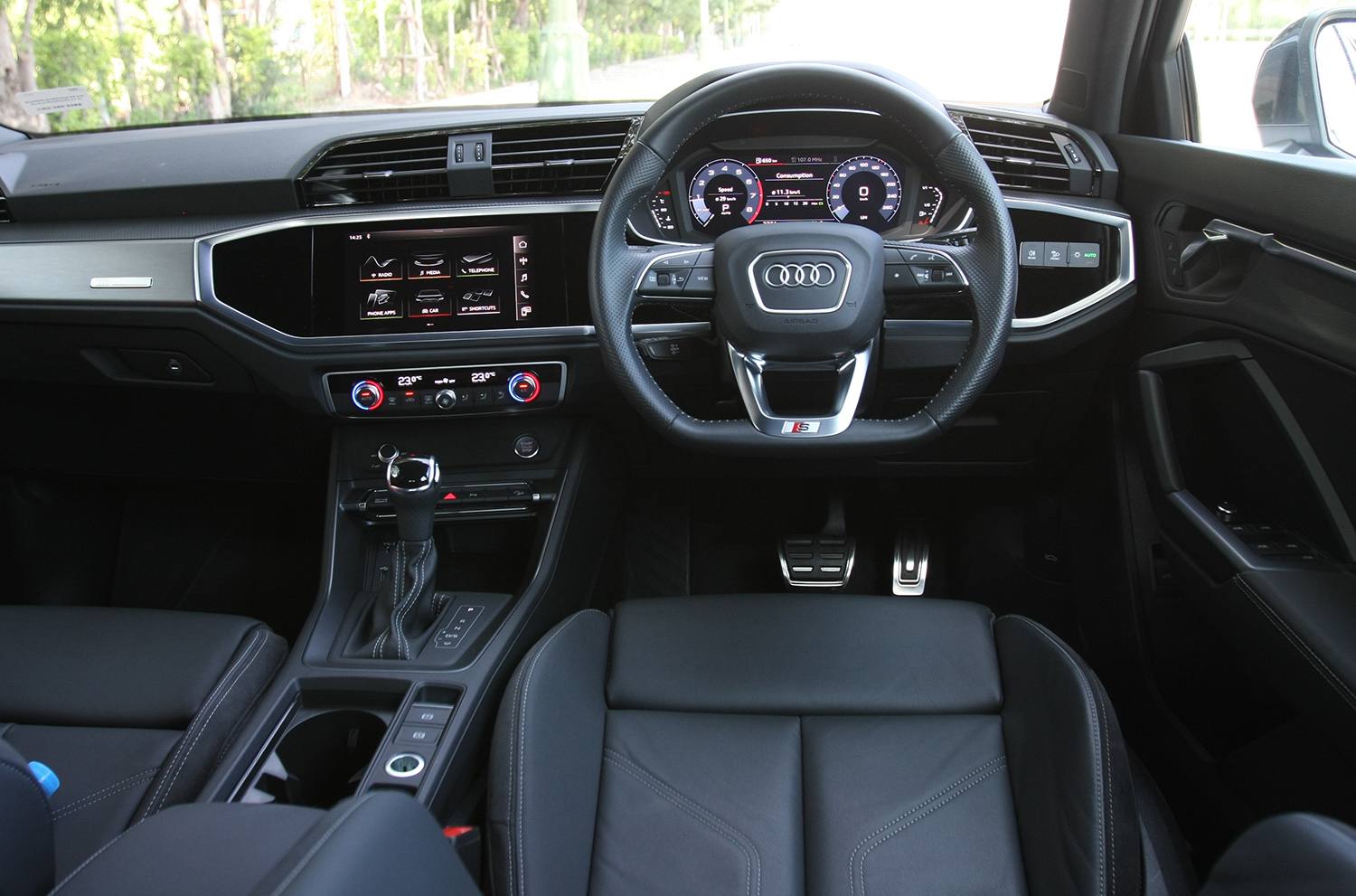 As the Q3 Sportback is being used to form our driving impressions, you might have expected the chassis setup to be slightly firmer than the in regular one because that’s the way it’s supposed to be in differentiating sporty and normal on the move.

But they are both the same, according to Audi officials, which is why you can hardly feel an underlying firmness you would find in an X2 or X4. The Q3 Sportback doesn’t need to be considering that buyers would still be hard-dressers, so to speak.

Perhaps the 19in wheels will possibly be more the deciding factor for the car’s ride comfort especially when traversing over sharp ruts and bumps around town. 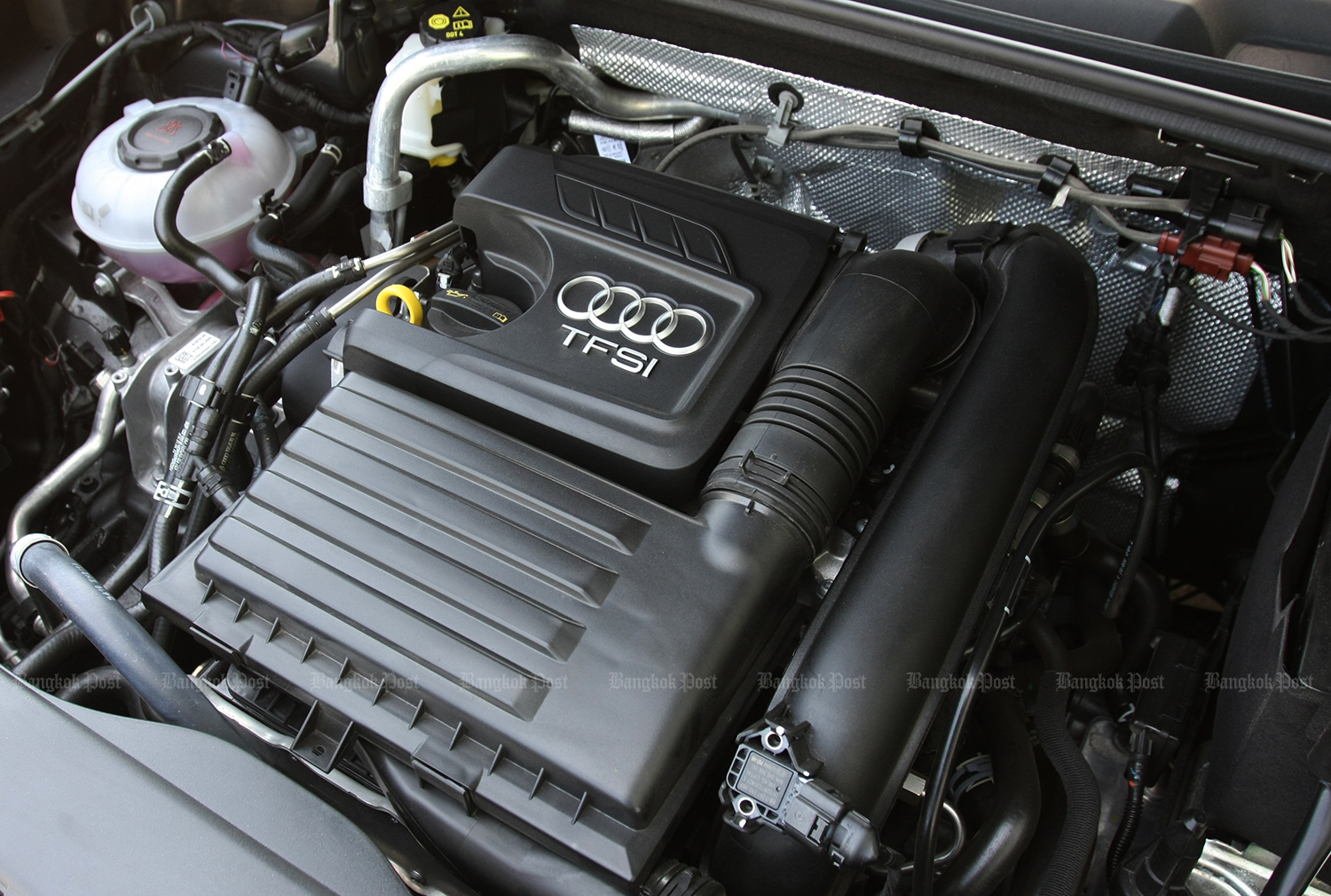 Like in most Audis, the driving characteristics have tailored for ease of use in real-world condition. The Q3 Sportback lacks the beefier feel of the X2 or Mini Countryman, although that wouldn’t probably bother most potential buyers nor should they go to the trouble of switching the driving mode into its sporty setting.

More of a letdown in the Q3 Sportback is the engine and transmission. Most likely due to concerns of pricing, the two Q3s are powered by 150hp 1.4-litre petrol-turbo and six-speed dual-clutch automatic; elsewhere a similarly powered 1.5-litre with cylinder cut-off technology to reduce fuel consumption and seven-speeder is available.

You can feel some of the deficits of the older powertrain including some lag and lack of in-gear acceleration at low speeds. Drive out of town and you’d still need to give some effort on the gas pedal. All of a sudden, you think of a near-200hp 2.0-litre engine some rival brands are using (the old Q3 came to Thailand in 2.0 form).

Of course, the 1.4-litre unit in the Q3 Sportback isn’t horrid but is now probably best kept for smaller hatchbacks or SUVs from Audi that really needs to cope with pricing.

As an import from Europe with no kinds of tax perks, the Q3 Sportback is priced quite attractively at 2.749 million baht, some 200k more than the regular Q3.

We haven’t sampled the normal Q3, but the sporty cousin does sound like the proper deal the way we see them at the moment. It also helps the Q3 Sportback proposition feel more justified against its competition. 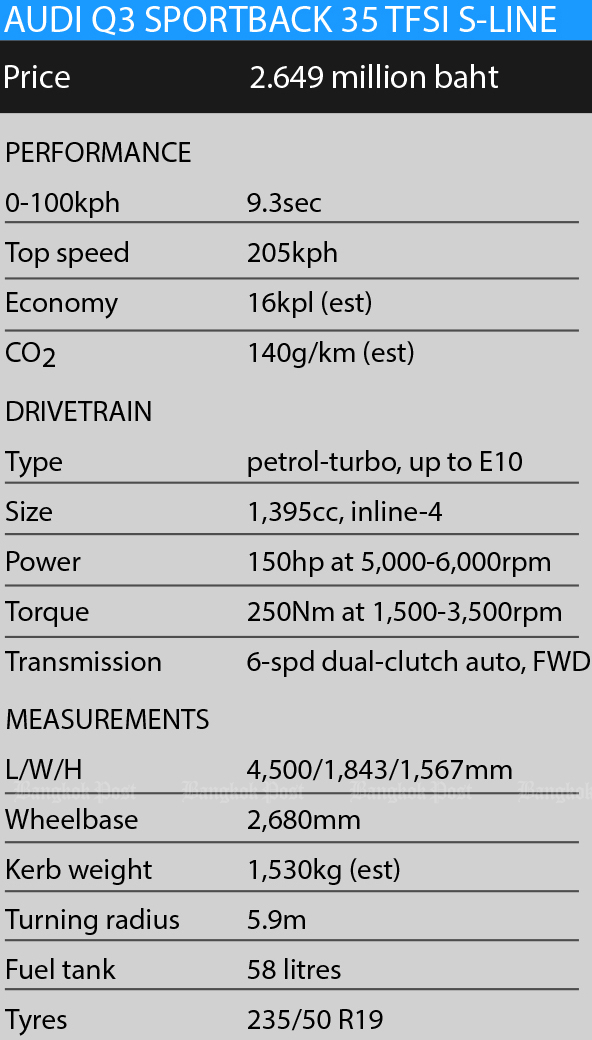 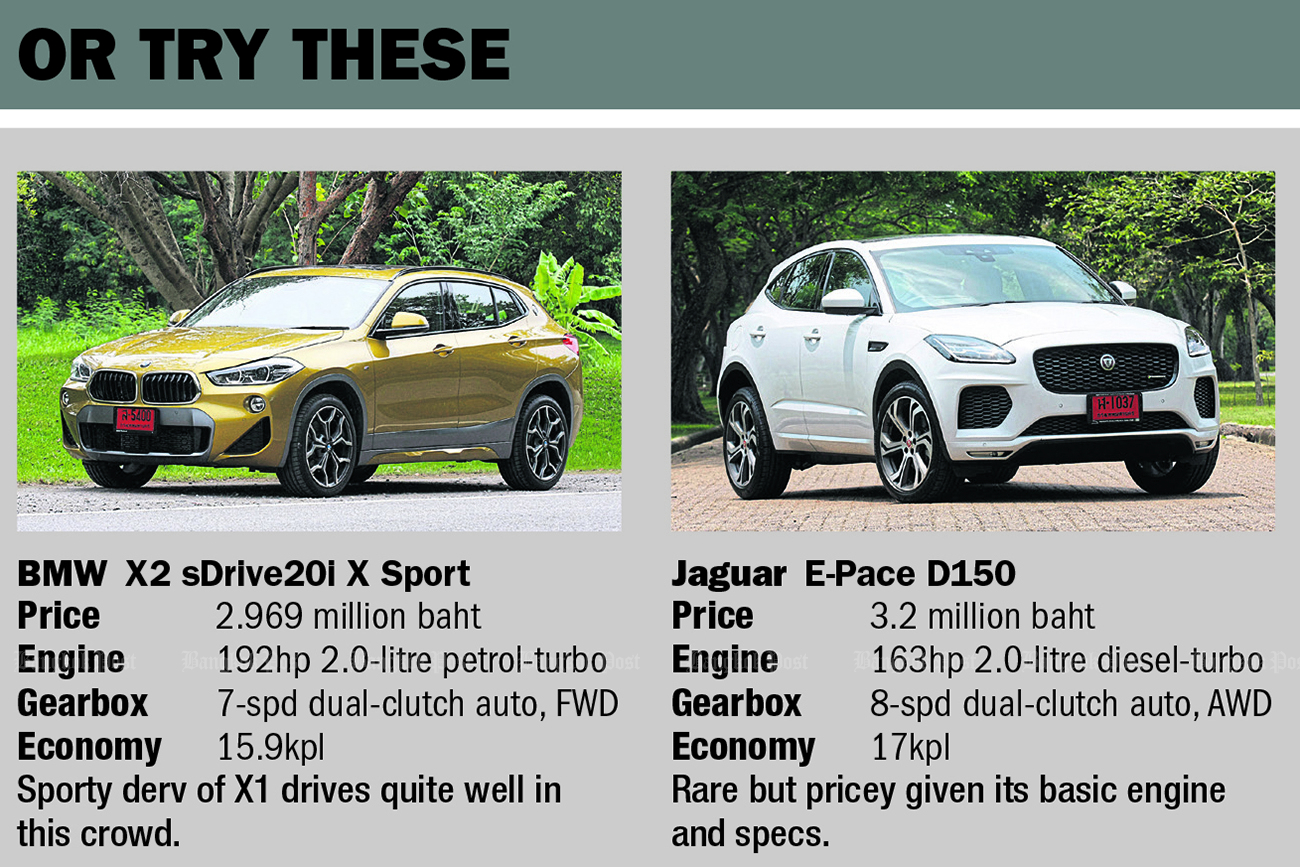 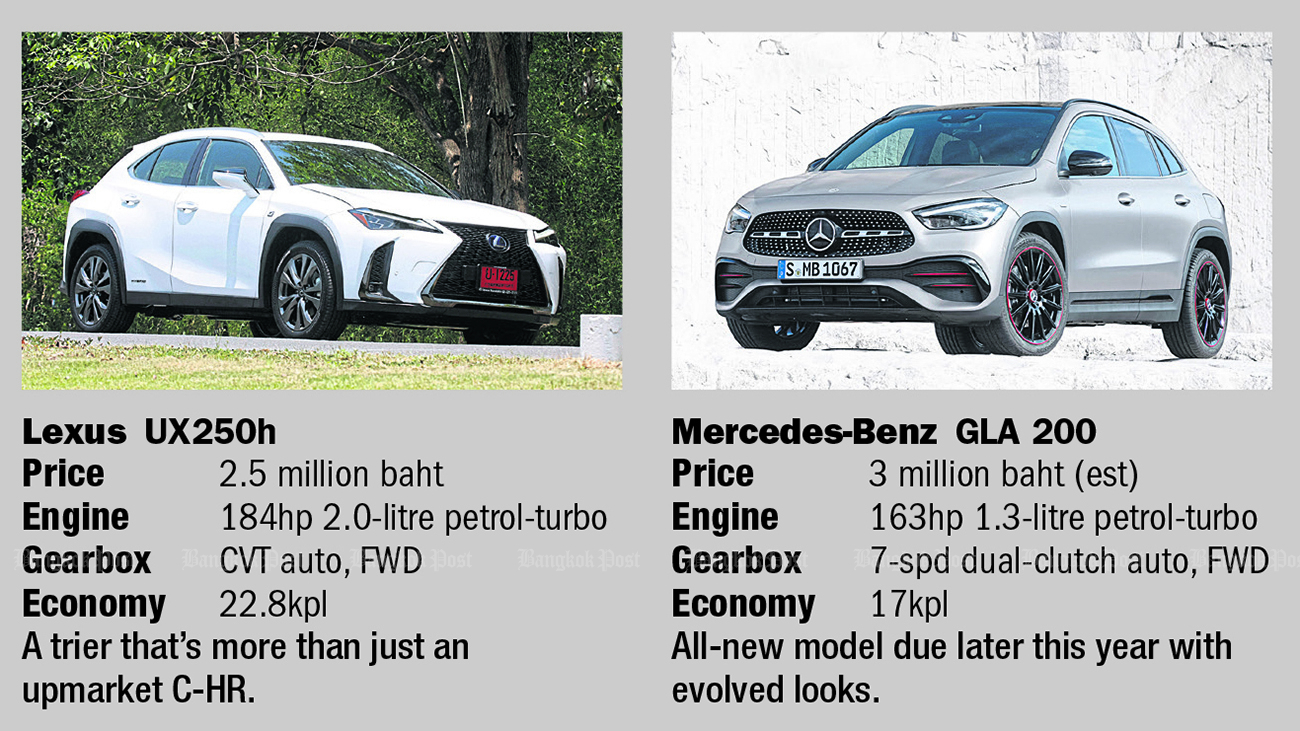 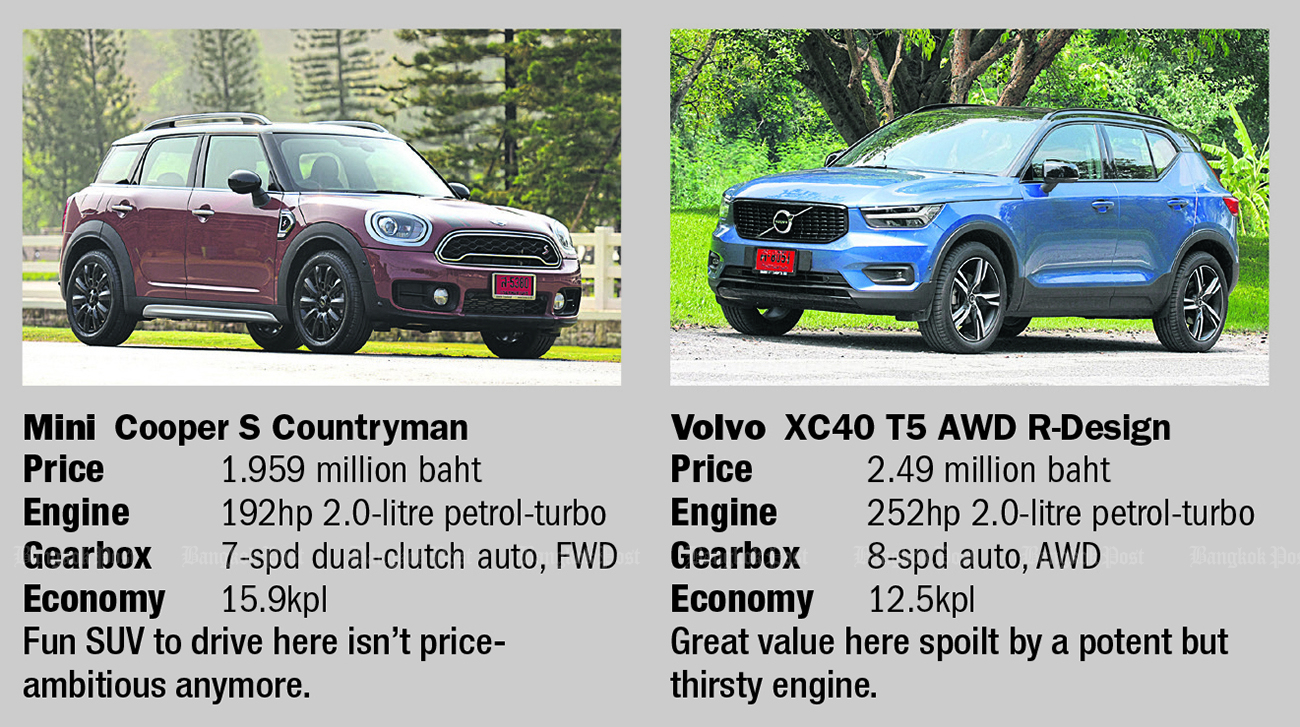