SET-listed tyre manufacturer Goodyear (Thailand) Plc is optimistic that its performance this year will be boosted by strong demand from the domestic market.

Managing director Finbarr O'Connor said the first-time car buyer scheme in late 2012 had been a massive stimulus for the car population in Thailand, offering a perfect market environment for Goodyear.

"Although the overall automotive industry remains flat, demand for replacement tyres is still strong, as tyres need to be changed every 57,000 kilometres," he said. 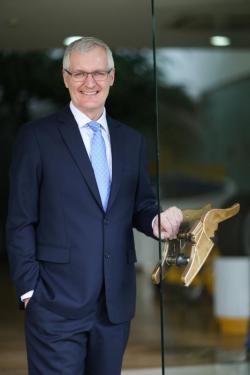 The Yingluck Shinawatra administration's first-time car buyer programme drove overall car sales up by 80.6% in 2012 to 1.44 million, 1.23 million of which were bought under the scheme.

For the first quarter of this year, the company reported sales revenue increased further by 7.82% year-on-year to 986 million baht, with net profit surging 26% to 58.5 million baht.

Domestic sales contributed 476 million baht, up 16.6% for the period, while export revenue fell slightly by 0.75% to 510 million baht.

Established locally in 1968, Goodyear operates a production facility in Pathum Thani with 800 employees. The factory ships tyres to Asia, the Middle East, Oceania and South Africa. The US company Goodyear Tire & Rubber Company is a major shareholder with a 66.97% stake.

Mr O'Connor, who is also chairman of the Thai Automobile Tyre Manufacturers Association, said Thailand is one of the top five finished tyre manufacturers, with overall production of 75 million tyres per year. Of that, 50-55 million tyres go overseas with the rest serving the domestic market.

He said the government's accelerated plan to construct the long-delayed national testing centre in Chachoengsao would help boost exports in the long run, adding that the centre would help upgrade all automotive-related products to meet international standards.