Broccoli Revolution on Sukhumvit 49 is among a new wave of Bangkok eateries catering to vegan diet preferences. Photo: Somchai Poomlard

When Shankar Narayan first turned to veganism -- consuming 100% plant-based foods and shunning everything originating from animals -- in 2001, he was all alone.

"Up until 2004, I did not come across a single vegan in coastal Karnataka or anywhere else in the country. Nobody knew of the concept then," said Narayan, a 51-year-old accountant and auditor in Baindoor, a sleepy town in the southern Indian state.

His experience led him to found the Indian Vegan Society, since rechristened the Satvik Vegan Society. Today it has more than 3,000 members across India including Hindus, Muslims, Christians, Buddhists and Jains.

Narayan is not even counting the tens of thousands of other vegans associated with animal protection groups such as People for the Ethical Treatment of Animals (Peta), People for Animals (PFA) and People Against Animal Cruelty (PAAC). Many of them run hospitals for birds and animals, train people to cook vegan food, and run vegan restaurants in New Delhi, Mumbai, Goa, Gurgaon, Bangalore, Chennai and other parts of India.

"There has been an exponential increase in the number of vegans in India since 2004. This has become possible because now alternative vegan foods are available. You have soya, cashew, coconut, almond and rice milk as a substitute for cattle milk," he said in an interview with Asia Focus.

India, considered the cradle of vegetarianism (people who eat a plant-based diet along with milk obtained from cows), is steadily turning further away from diets that include meat. According to a survey conducted by the Registrar General of India in 2014, the number of non-vegetarian Indians over the age of 15 dropped to 71% from 75% in 2004.

Prime Minister Narendra Modi, a strict vegetarian, may be helping to encourage this transformation. Even when he travels abroad, he insists on eating only vegetarian lunches and dinners.

But Gaurav Jain, a chartered accountant and vegan based in New Delhi, believes the migration to vegetarianism is slow compared with the switch from meat eating to veganism.

"The flight from non-vegetarianism to vegetarianism is slow due to the popularity of eating out. People do not mind eating non-veg as long as somebody else cooks it. In comparison to this, veganism is spreading much faster," said Jain, who runs a bird hospital on the outskirts of India's national capital.

Unlike vegetarians whose diet usually involves milk from animals as well as eggs, vegans not only eschew all animal-origin foods including meat, poultry, fish, eggs, milk, honey and their derivatives, but also avoid using all animal-based products including leather, silk and wool. Narayan and Jain attributed their commitment to veganism to their need to lead a healthy life, protect the environment, avoid cruelty to animals and adhere to a higher standard of personal ethics. 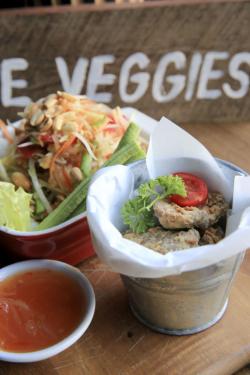 Among Bangkok residents seeking to go vegan in style, the Veganery bakery and restaurant chain has found many fans. Photo: Taweechai Tawatpakorn

The Satvik Vegan Society has organised four international events in India to promote veganism. These events include testimonial speeches from vegans as well as cooking workshops that demonstrate the advantages of eating a plant-based diet.

Anuradha Sawhney, the author of a major book on veganism and a supplier of vegan food in Pune through her chain Back to the Basics, believes veganism promotes a non-violent culture. She blames the spread of kidney disease in the United States to Americans' habit of eating foods high in cholesterol and saturated fat including cow's milk and meat.

"Animal meat has no fibre," she said. "It is also difficult for the human kidney to extract protein from it."

Sawhney took to veganism in 2000 when she joined Peta. Unlike in the past when mainly older people ordered vegan diets from her, now she is seeing more young customers.

"In the past, I would get one or two calls in a week. Now seven, eight or 10 people call in a day. There is definitely more awareness," she told Asia Focus.

Khushboo Gupta, a vegan food trainer and supplier of vegan cakes in New Delhi under the brand Ethical Indulgence, said veganism had helped to reduce her dependence on medicines for her breathing problems.