While a lacklustre economy and past government policy have weighed on Thailand's automotive market, a sound strategy has put the Japanese maker in the fast lane to higher sales

Mr Chanchai says he’s learned a lot from the ups and downs of Thailand’s economy and automotive industry over the past two decades.

Thailand's domestic car market for years has been battling a continuous slump since 2013, with the blame placed squarely on the previous government's generous first-time car buyer scheme that ended in late 2012.

This year's sales are also expected to stay flat or rise slightly, possibly hovering in a range of 790,000-800,000 units, leaving only a handful of carmakers likely to record higher sales.

Japanese carmaker Mazda Motor Corporation is one of those fortunate few, expecting sales to increase for a second straight year after recovering last year. 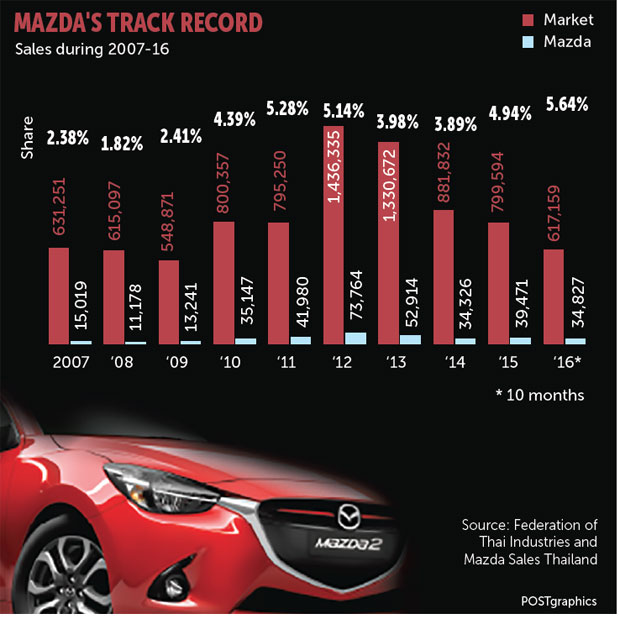 Higher sales and brighter prospects, of course, do not stem from pure luck. Mazda's good performance has been the result of the company's prudent strategic planning and smart management team.

Chanchai Trakarn-Udomsuk should know, as he is now the president of Mazda Sales Thailand. 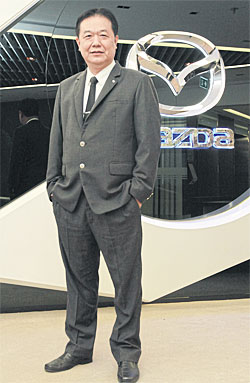 Mr Chanchai, a mechanical engineer, started off as a production manager in the powertrain shop at AutoAlliance Thailand (AAT) in 1996, when the plant was first built.

AAT is a joint vehicle manufacturing venture between Mazda and Ford. It is worth US$1.66 billion (5.1 billion baht) and situated on Rayong's Eastern Seaboard Industrial Estate. AAT began an operation for pickup trucks in 1997.

Mr Chanchai worked at AAT until 2015, when he rose to become the company's senior vice-president for the quality, engineering and production planning division. On Aug 1 that year, he moved to Mazda Sales Thailand as executive vice-president for corporate planning.

In August this year, Mr Chanchai was named president, the first-ever Thai to hold the position at Mazda Sales Thailand. 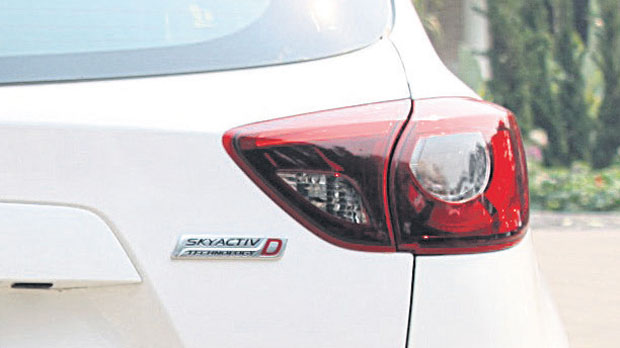 Thailand was chosen as one of three countries outside of Japan to be a production hub for the SkyActiv transmission. Photo: Mazda

The appointment was part of Mazda's management localisation, which aims to develop the full potential of Thai executives and let them use all their capabilities to run the multinational company. The process has left just three Japanese executives among Mazda's 17 managerial heads.

It is a "One Mazda" strategy, which entails combining all departments into a cohesive organisation that works towards a common goal.

"Over the past 20 years with Mazda, I've learned a lot from the ups and downs of Thailand's economic and automotive industry development," says Mr Chanchai, who is now 51. 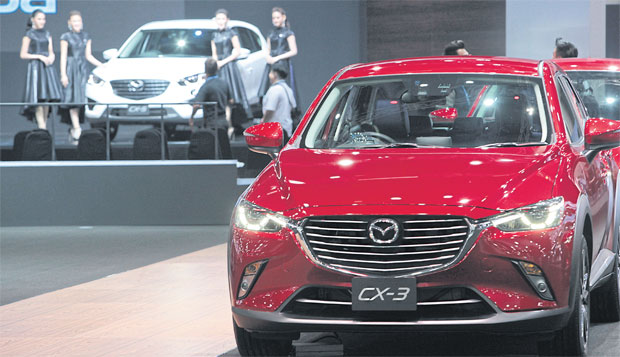 Mazda expects sales to surge by 14% this year to 45,000 units. Photo: Tawatchai Kemgumnerd

"It was unfortunate that I'd joined AAT at a time when Thailand had just been hit by the financial crisis of 1997. AAT during that period had a tough time trying to run its business. It had not only been burdened by a sharp rise in financial costs triggered by the depreciation of the baht, but was also forced to tighten cost controls in its best bid to stay afloat."

Still, he says it was advantageous that the automotive industry during that period relied mostly on exports. A weaker baht and strong export demand helped AAT's operations recover to normal within two and a half years, much faster than expected.

According to Mr Chanchai, no matter how Thailand's economic and political conditions change, Mazda will never stop investing in Thailand. Apart from AAT, the parent firm in its structural reform plan for the period of 2012-16 has shifted to Mazda's fuel-efficient technology, the first-generation SkyActiv engine.

Thailand was chosen as one of three countries outside of Japan (China and Mexico being the others) to serve as a production hub for the SkyActiv transmission. The company invested ¥26 billion (8.47 billion baht) in 2013 to establish the transmission plant, Mazda Powertrain Manufacturing Thailand (MPMT), in Chon Buri.

In 2014, Mazda was the first eco-car manufacturer to apply for the Board of Investment's promotional incentives in the second phase, as well as one of five new carmakers to apply. It was also the first carmaker under the scheme to have kicked off production that same year with a combined investment of 12.6 billion baht.

Mazda2 eco-cars are available in the SkyActiv platform for both diesel and petrol engines, which are now well-accepted in local and international markets.

Mazda is also carrying out a new medium-term business plan, "Structural Reform Stage 2", which covers the period from 2017 to 2019. The aim is to achieve "qualitative growth" and improve brand value.

"Our after-sales services remain weak, and only 20% of dealers have improved their sales and service quality to meet Mazda's standards," he says. "So in my term, I will try my best to synchronise all related parts of Mazda Sales Thailand, be it sales, dealers or service centres, to have the same quality and standards."

His top priority is thus to develop 147 showrooms and service centres nationwide to achieve Mazda's goals. To that end, Mazda has just cancelled contracts with four dealers because they refused to improve their sales and after-sales services.

Some 147 dealer outlets are scheduled to be finished by 2018, with at least 14 undergoing a makeover this year.

"The key to success for car companies is to rank above the market average on both the customer service index (CSI) and sales satisfaction index (SSI) every year," Mr Chanchai says.

Marketing consultancy J.D. Power ranked Mazda below average for CSI in its 2016 survey but above average in the 2015 SSI survey.

Mr Chanchai's second priority is to strengthen the collaboration between Mazda's manufacturing and sales to improve car delivery to customers.

He acknowledges that Mazda's customers have had to wait for more than a month to get their orders delivered.

"It is a cooperation problem between the plant and sales units," Mr Chanchai says. "I'm committed to improving and upgrading communication as much as possible to ensure that both sides are working in the same direction to reduce the lead time to just two weeks."

Mazda has many models, he says, so the sales unit needs to know which models and colours are popular so that the AAT plant can more realistically forecast future production.

The new president is also committed to developing car repurchase services for Mazda after the parent firm heavily invested in facilities in Thailand to support local operations, including a parts distribution centre in Samut Prakan.

Mr Chanchai has set an ambitious short-term goal of increasing Mazda's market share to 8% in 2018 from 5% last year: "We aim to raise market share by one percentage point each year until 2018 and expect our sales to rise at least 10% annually from 2016 to 2018."

He voices confidence that Mazda's market share will stay at 6% in 2016, thanks to January-to-September sales totalling 31,800 cars -- up 20.6% from the same period last year -- with market share standing at 5.7% for the period.

Mazda came to Thailand for the first time in 1951 and was distributed by local partner Kamol Sukosol.

Mazda formed a joint venture with the Sukosol family to set up a local distribution unit, Sukosol Mazda, and a transmission plant, Sukosol and Mazda Engineering, in 1990.

In 1997, Mazda and Ford pooled joint investment of US$1.66 billion for AAT at Rayong's Eastern Seaboard Industrial Estate. In 1999, Mazda took over local vehicle distribution units and changed the company name to Mazda Sales Thailand.

The AAT plant now assembles 270,000 vehicles a year, with Mazda accounting for half that figure.

As a future footprint, the Hiroshima-based firm announced on Aug 31 that it would increase annual capacity at its engine assembly plant in Chon Buri from 30,000 to 122,000 units in the first half of 2018.

The plant produces SkyActiv-D 1.5-litre diesel engines and SkyActiv-G 1.3-litre petrol engines that serve AAT. The expansion is aimed at exporting engines to Mazda's production sites in Asean. The SkyActiv-G 2.0 engine will be added to output.

Mr Chanchai says the Board of Investment has already approved the project.

The parent firm bought an 800-rai industrial plot in Chon Buri to operate Mazda's transmission and engine plant, which occupies 30% of the site thus far.

"The Thai production base has a full line of major content and parts, as well as assembly lines on a par with the Hofu plant in Japan, while only a research and development centre has yet to be set up here," Mr Chanchai says.