Analysis: Some Thai companies are unaware of or unable to use tariff preferences in FTAs.

Activists from FTA Watch join forces to protest against free trade agreements at a rally in Chiang Mai in 2013. Thailand now has 11 FTAs in place with foreign partners despite local businesses often struggle to reap the rewards from the pacts. TAWATCHAI KEMGUMNERD

The Commerce Ministry reported exporters took advantage of US$52.5 billion worth of FTA preferences and lower tariffs allowed by the Generalised System of Preferences scheme last year, a rise of 3.82% from 2015.

But FTA preferential utilisation rates were still relatively low, averaging 56.7% of total export values for goods entitled to the preferences, said the ministry.

Aat Pisanwanich, director of the Center for International Trade Studies at the University of the Thai Chamber of Commerce, said a number of Thai businesses have yet to fully understand how to use the tariff preferences provided by FTAs, particularly the rules of origin.

Rules of origin are the criteria needed to determine the national source of a product. They are important because duties and restrictions in several cases depend upon the source of imports.

Mr Aat said Thai businesses may not understand the process for requesting a certificate of origin (Form D) for raw materials imported. The harmonised code of products exported by Thai businesses may also not correspond to FTA agreements, voiding the tariff preferences, he said.

More importantly, the paperless requirements are tough for some Thai small and medium-sized enterprises (SMEs) to pursue, said Mr Aat.

"Large businesses are generally aware of the opportunities offered under the preferential schemes, but many SMEs, especially those located in rural areas, still face difficulties in making use of the tariff preferences offered," he said.

"It is the direct responsibility of state officials to better inform and educate Thai businesses in declaring products according to Form D and promote more joint ventures between Thai businesses and Asean counterparts to create raw material dependence within Asean manufacturers."

Vallop Vitanakorn, vice-president of the Federation of Thai Industries, said a low FTA preference usage rate is likely due to a lack of understanding by exporters.

Relatively low import tariffs on raw materials used for production for exports also make the FTA preferences uninteresting for some, he said.

Thailand has 11 FTAs in place -- five on a bilateral basis and six on a multilateral basis -- and is negotiating over 10 more FTAs.

FTAs are not only about import duty reductions or elimination but also are catalysts for long-term investment and growth in participating countries.

Although Deputy Prime Minister Somkid Jatusripitak has given directives for Thai trade negotiators to focus more on strategic partnerships with potential partners such as Cambodia, Laos, Myanmar, Vietnam, Britain, France, Germany, Italy, China and South Korea, rather than just FTAs, the negotiations over FTAs remain active, particularly with Pakistan.

Thailand and the other 15 members have also been ramping up talks on the Regional Comprehensive Economic Partnership (RCEP) after the US withdrew from the Trans-Pacific Partnership.

While RCEP negotiations were scheduled to conclude by the end of 2015, negotiations are expected to intensify this year as analysts predict a deal could occur in 2017. 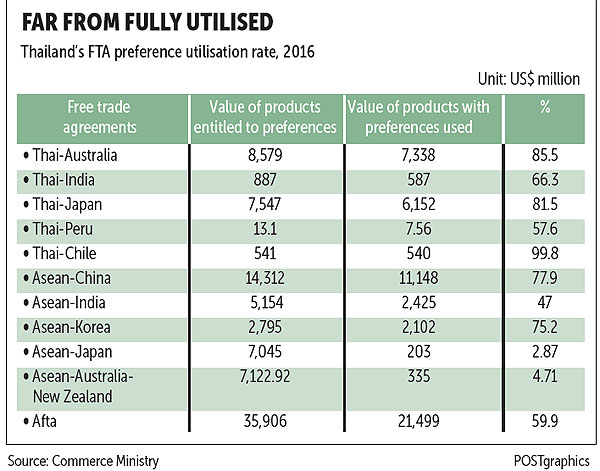